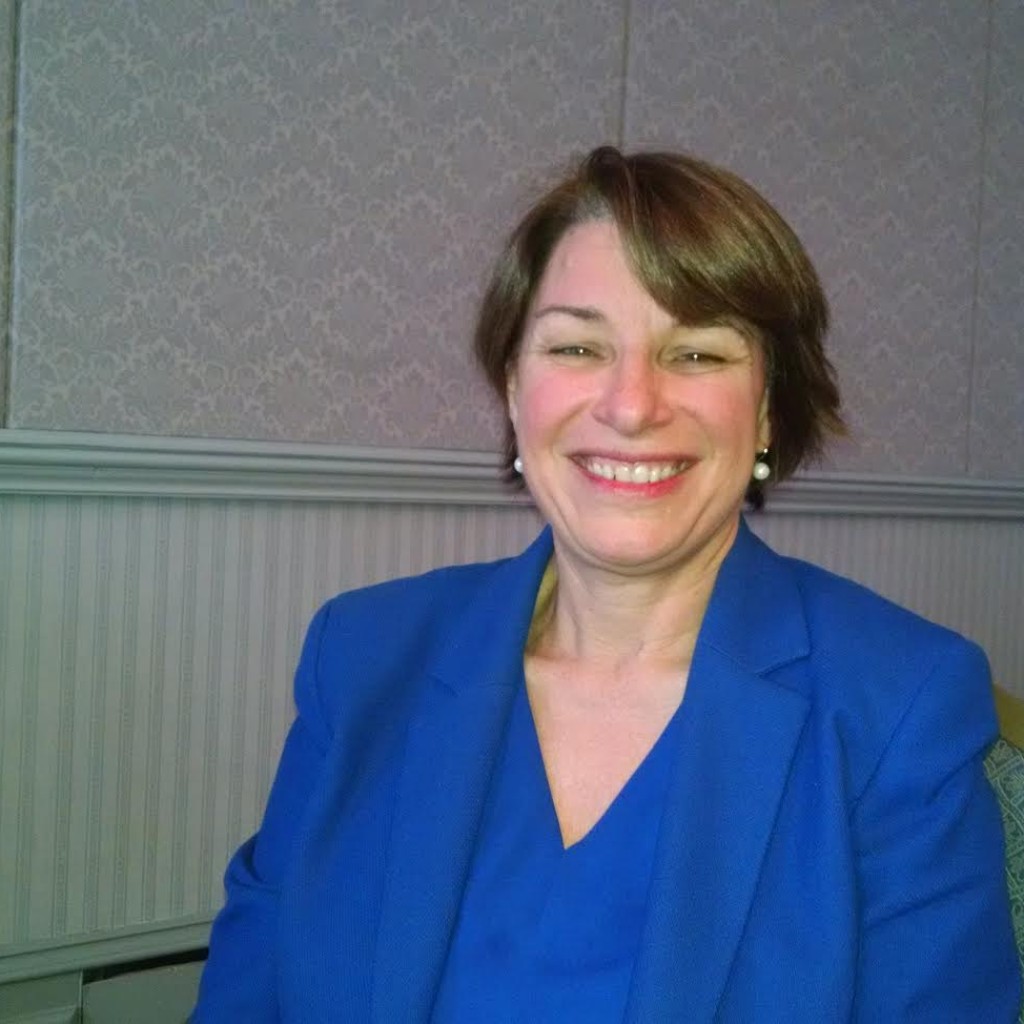 The 55-year-old Democrat was initially elected in 2006 and was re-elected in 2012. She’s just penned a new memoir, called, The Senator Next Door.

At the Florida Democratic Convention held this past weekend at Lake Buena Vista, FloridaPolitics.com sat down with the senator for about ten minutes. This is what we talked about, beginning with the rumor that began a few years ago that she was thinking of running for president during this cycle.

Amy Klobuchar: I love my job now, and I actually just wrote this book called, The Senator Next Door, for a reason.

I love my job and Minnesota, with Paul Wellstone dying, which was such a tragedy, we’ve just had a lot of people for sometimes because of death, sometimes because the voters have thrown people out, we’ve had so much people rotating in and out, so it’s been really good to be such a steady force there, and that’s what I’m planning to. I’m here for Hillary, because I’m really exciting about how her campaign is going.

On Clinton being the de facto nominee so early out –

Well, first of all, I think she has made it clear from the beginning that this is not a coronation. She knew there would be people running – serious people, like Bernie Sanders and so, I think that Bernie Sanders is continuing to run and certainly has been a strong presence including at the debates, so I don’t think anyone is considering anything done. I think what’s happened was, she was secretary of state, which is not an easy job, (going) all over the world representing our country, and I think what’s happened over the last few months, especially the last month or two, is that people have gotten to know her again. She’s been doing individual interviews on TV, and so people are seeing her more personally than just as ‘oh, she was sec, of state’, or ‘oh, she was the first lady.’  And that’s been a very positive thing. Certainly her strong performance by every single commentator’s viewpoint made a difference, the fact that she had to withstand 10 hours longer than any witness in the history of Congressional investigations, that she had to sit there for 10 hours.. The fact that she had to withstand that sort of questioning and stand strong, I think all of that has helped people back to remember what a strong woman she is.

What about that Rand Paul tweet you sent out there other night (The U.S. Senate ended up staying up and voting on the budget bill until 3 a.m. on Friday morning. Klobuchar tweeted, “Senate & staff all here at 1:55 am so that Pres candidate Rand Paul can send out tweet telling fans to watch him on @cspan2″)

Before I sent that tweet I showed it to two Republicans and two Democrats so it wasn’t some like sleep deprived moment, I’m like ‘this is okay?’ but someone needs to make this point!

And this happened when we had the debate on amendments to the Patriot Act and literally ran an ad that said “big showdown” showing the Capitol on fire, with fire coming out, it was a PAC ad, I mean, he has done this before, which is sort of grandstanding and used it raise money or to tweet out and I think that’s what Sen Nelson was getting at (during an earlier speech at the convention) and on the presidential level and to me, Bernie and Sec. Clinton are having legitimate debates to me that last debate was a textbook on how to do a debate, the 5 of them?

But on the other side, it’s just one thing after another, from putting one’s cell phone numbers out to calling each other’s names – a lot of it perpetrated by Trump, but they’re all trying act like that.

On GOP candidates complaining about moderators from CNBC?

Well, I tend to be someone who likes questions that are hard hitting that you get to an answer on but, and you have those kind of gotcha questions I do think that’s unfortunate. I would never go on to say that you should never have a debate on NBC, I thought that was pretty extreme, because you can have different moderators, it’s not like throwing a whole network over and O think I would have done the debate differently, but I still think that debates are debates, you’re going to have different moderators with different viewpoints come up, but I think the real story of that debate wasn’t what the questions were, it’s what the answers were! (laughing).

How they are talking about these things that I don’t think the American people are focused on. They want to know how they’re going to send their kid to college, how they’re going to be afford their mortgage. This was supposed to be an economic debate, and whatever the questions were, they went off on whatever they wanted to go off on, I just think it’s not where the American people are, and certainly the continuing attacks on immigration reform and that people should be deported who were born in this country, I mean, that’s going to be a major issue in Florida and across the land here.

Any Republican she fear more than others?

I don’t think any pundit could predict who would be the strongest candidate right now … Again, I just want to see who they pick and we’ll go from there.

On Obama’s announcement that he’s sending advisers to fight ISIS?

On the provision in Budget Bill that no longer mandates employers with more than 200 employees have to offer health insurance to employees?

I want to look at how that would apply in my state. But I think what we’ve seen is that there is some bipartisan agreement when you have a major bill like the health care bill, you’re going to have some smart changes here and there to the bill. Whether it’s to cover more people, whether it is to focus on what the results are, you cannot pass a major bill like that without some changes.

We’ve done a few things every so often in a big bill, but it’s been impossible to make sensible changes because of the fact is all they want to do is talk about repealing it, and certainly in Florida the major deal in the ACA is the refusal of the governor and others, the refusal of the Legislature to expand Medicaid, that’s the major problem here. You have 800,000 people who are not being covered. You’re basically rejecting money out of Florida. That just doesn’t make sense to me, when the middle class is struggling, so while I think there are sensible changes that I would support.

For me, I’m not a big fan of the medical device tax, I would at least make a deal on it, there are some other things that we could do on how we sell the insurance with what we do with restaurant workers, things like that, I think there are things that we can do, but again, we can’t even have those discussions so I haven’t really focused on it.

What would you like to get passed in the Senate in the next year?

A lot, so there is the infrastructure bill, we’re trying to deal with how to fund it, but that is a lot of extra money for states like Florida. This is the bipartisan bill that Barbara Boxer negotiated with the Republicans that came out of the Senate.

For my state alone it’s $34 million the first year, I know that doesn’t sound like a lot to people out in Florida I’m sure, but $150 more million in the six-year, so that was paid for by some things that were not as controversial and it was a bipartisan agreement, it’s sitting there over in the House. That would be something very positive to get done.

But also the education bill, the incessant testing and how we can have that work better. We would like to see another bill get passed that is doable. Congressman Kline‘s a Republican from my state who is retiring and I think he wants to get that done, and we like the Senate bill better, and we passed that out of the Senate.

You really want to get into the nitty gritty? Patent reform, that would be a really good thing to get done. From the Florida standpoint on tourism, we’ve already got that reauthorized that last year.

Cuba. (She refers to The Freedom to Travel to Cuba Act of 2015 which would end all travel restrictions on Americans wanting to travel to Cuba. It also would allow travel-related banking transactions).

Could that get done at the end of the year with Sen. Rubio running for president and right now, he’s adamantly opposed to that, not certain that Mitch McConnell will bring up even some of the more moderate versions of that with the financing and …