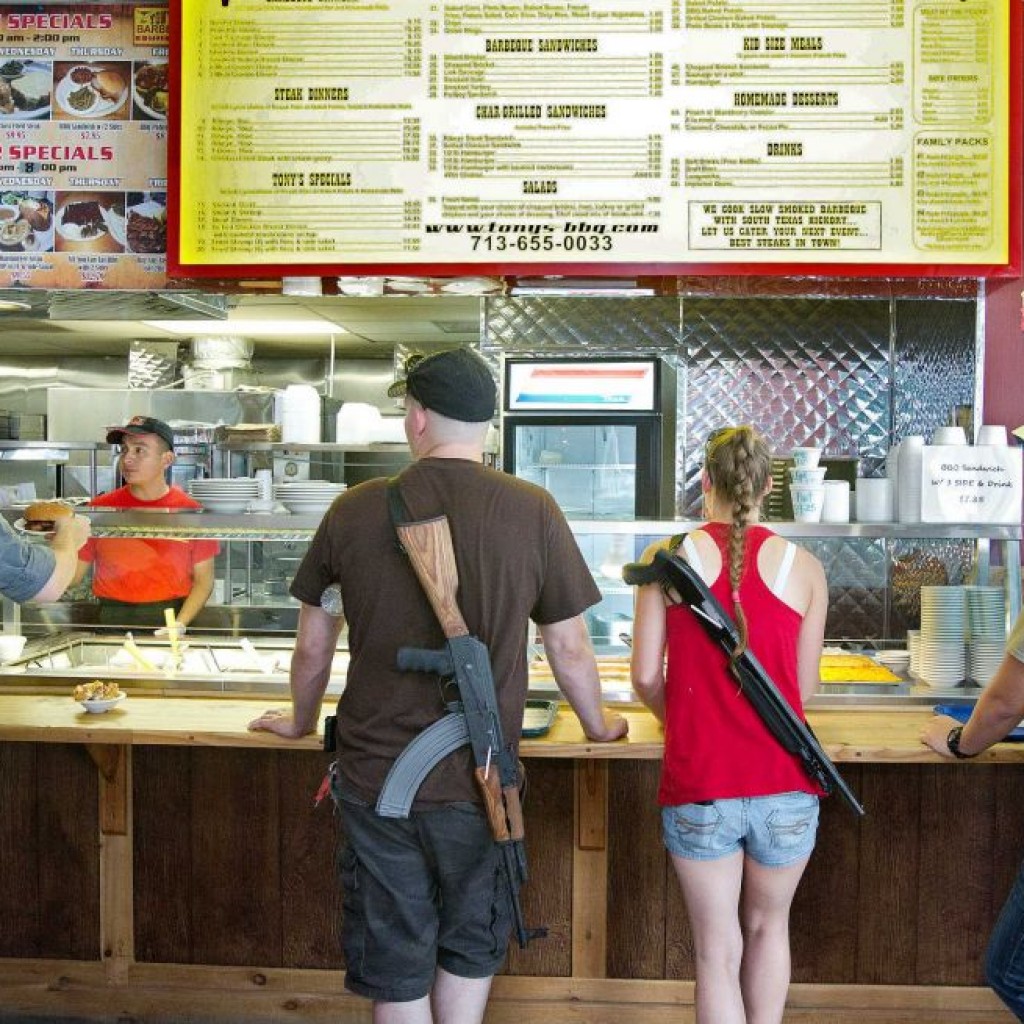 Laws taking effect at the start of the new year show states diverging on some hot-button issues.

Restrictions on carrying guns eased in Texas, for example, but got tighter in California. It is easier to register to vote in Oregon, but there is another step to take at the polls in North Carolina.

The opposing directions in the states reflect a nation with increasingly polarized politics.

In the debate over gun control, both sides say their arguments are strengthened by a string of mass shootings this year. That includes the December attack at a county health department gathering in San Bernardino, Calif., when a couple who investigators say pledged allegiance to the leader of the Islamic State group killed 14 people.

Everytown for Gun Safety, a group backed by billionaire former New York City Mayor Michael Bloomberg, is seeking to be a counterweight to the National Rifle Association’s lobbying of state lawmakers. Both groups are expected to be active in legislatures in the coming year.

Whether to raise the minimum wage has become another hot topic in states and cities, with the issue getting no traction in the Republican-led Congress.

New voting laws, meanwhile, could help shape the outcomes in state and federal elections in the coming year. Democrats and others who want to boost voter participation have been pushing to expand access to the polls, while conservatives have pushed for measures aimed at preventing election fraud. Each side says the other is using legislation to help their favored party in elections.

A look at some of the more notable laws taking effect this month:

Texas, the second-most populous state, joins 44 other states in allowing at least some firearm owners to carry handguns openly in public places. Under the Texas law, guns can be carried by those with licenses and only in holsters.

Meanwhile, California, the most populous state, has multiple new laws on gun control. One tightens a ban on firearms in and around schools. Under the new law, the prohibition applies even to most people who are allowed to carry concealed weapons generally. Another allows people to request that a judge order weapons be taken away from relatives who are believed to pose a threat.

California and Oregon become the first states that automatically register eligible voters when they obtain or renew their driver’s licenses. Critics of the measures — mostly Republicans — say that could lead to voter fraud and is part of a plan to register more voters who are likely to be Democrats. They say voters should register voluntarily. In both states, people are able to opt out of being registered.

Similar measures have been proposed in other states but never adopted. This year, Republican Gov. Chris Christie vetoed the concept in New Jersey.

In North Carolina, a voter identification law passed in 2013 that requires people to show a photo ID takes effect.

An amendment adopted this year allows voters who have trouble obtaining the required ID to vote anyway. That provision keeps North Carolina from joining eight states in which a photo ID is strictly required. There are still legal challenges over the law, and opponents want a judge to delay implementation.

In most states, voters are asked to show some kind of identification.

Hawaii becomes the first state to raise its minimum age, from 18 to 21, to buy or use cigarettes or e-cigarettes. It’s a move some local governments have made before, but never a state.

California joins West Virginia and Mississippi as the only states without a personal-belief exemption for parents who do not want to vaccinate their children. Children whose parents refuse to have them immunized against several diseases are not allowed to enroll in public or private school and instead have to be homeschooled. There is an exemption for children with serious health problems.

In California, a new law lets female employees allege pay discrimination based on the wages a company pays other employees who do substantially similar work. Under the law, it is up to employers to prove a man’s higher pay is based on factors other than gender.

Oregon becomes the fifth state with a paid sick leave mandate for many employers.

Some cities in traffic-congested urban areas are trying to ease the burdens of commuting. Employers with at least 20 workers in Washington, D.C., and New York City are required to offer commuter benefits such as tax-free mass transit subsidies to their workers. San Francisco already has a similar ordinance.

In Missouri, a new law links the duration of jobless benefits to the state’s unemployment rate. When fewer people are out of work, those claiming the benefits will be cut off sooner. The maximum length of the benefits will be reduced from the current 20 weeks — already among the shorter periods in the nation — to 13. Only North Carolina, which has a similar sliding scale, has a shorter period: 12 weeks.

The minimum wage rises in many cities and states with the new year. Some of the wage increases are coming under laws passed years ago that phased in the increases over a period of years. Some are automatic increases tied to the cost of living.

Fast-food workers in New York state receive their first pay bump under a new law that eventually will push their minimum wage to $15. The full amount will kick in at the end of 2018 in New York City and 2021 in the rest of the state.

The federal government has not touched the minimum wage since it was increased to $7.25 effective in 2009. Labor groups and workers keep pushing for higher raises while many business groups say raises could come at the expense of jobs. But with the federal rate unchanging, more state and local governments — particularly in the West and Northeast — are taking action.

Some cities, including New Orleans, also have new rates that started Friday. Minimum-wage fast-food workers in Seattle get a bump as part of that city’s phased-in increase to $15 an hour.

Taxes have gone up in some places and dropping in others.

In North Carolina, the tax on gasoline dropped by a penny a gallon to 35 cents. The sales tax on boats will drop in New Jersey as of Feb. 1.

Taxes on cigarettes and other tobacco products rose in Minnesota, as will hotel taxes in Hawaii.

Physicians in North Carolina are required to provide the state with ultrasound images of fetuses and other data related to abortions performed after the 16th week of pregnancy.

For pregnancies terminated after the 20th week, doctors must explain to the state Department of Health and Human Services how continuing the pregnancy would have threatened the life and health of the mother. Some lawmakers who favor abortion rights say the state should not have this medical data.

Two more states allow people who are in the United States illegally to be licensed to drive. Delaware’s law took effect Sunday and Hawaii’s is in effect in the new year.

Ten states and the District of Columbia already have similar provisions.

Illinois made it a misdemeanor to leave pets outside during extreme weather. Missouri, in a crackdown on the state’s commercial “puppy mills,” required dog breeders to provide more space for their animals and barred them from using wire-strand flooring in dog kennels.

Tennessee gave approval this year to the first statewide animal abuse registry. The law, which took effect Friday, requires the Tennessee Bureau of Investigation to post to its website a list of persons convicted on or after that date of aggravated animal cruelty, felony animal fighting, or bestiality and related offenses.

previousNew York sues to get DraftKings, FanDuel to return money