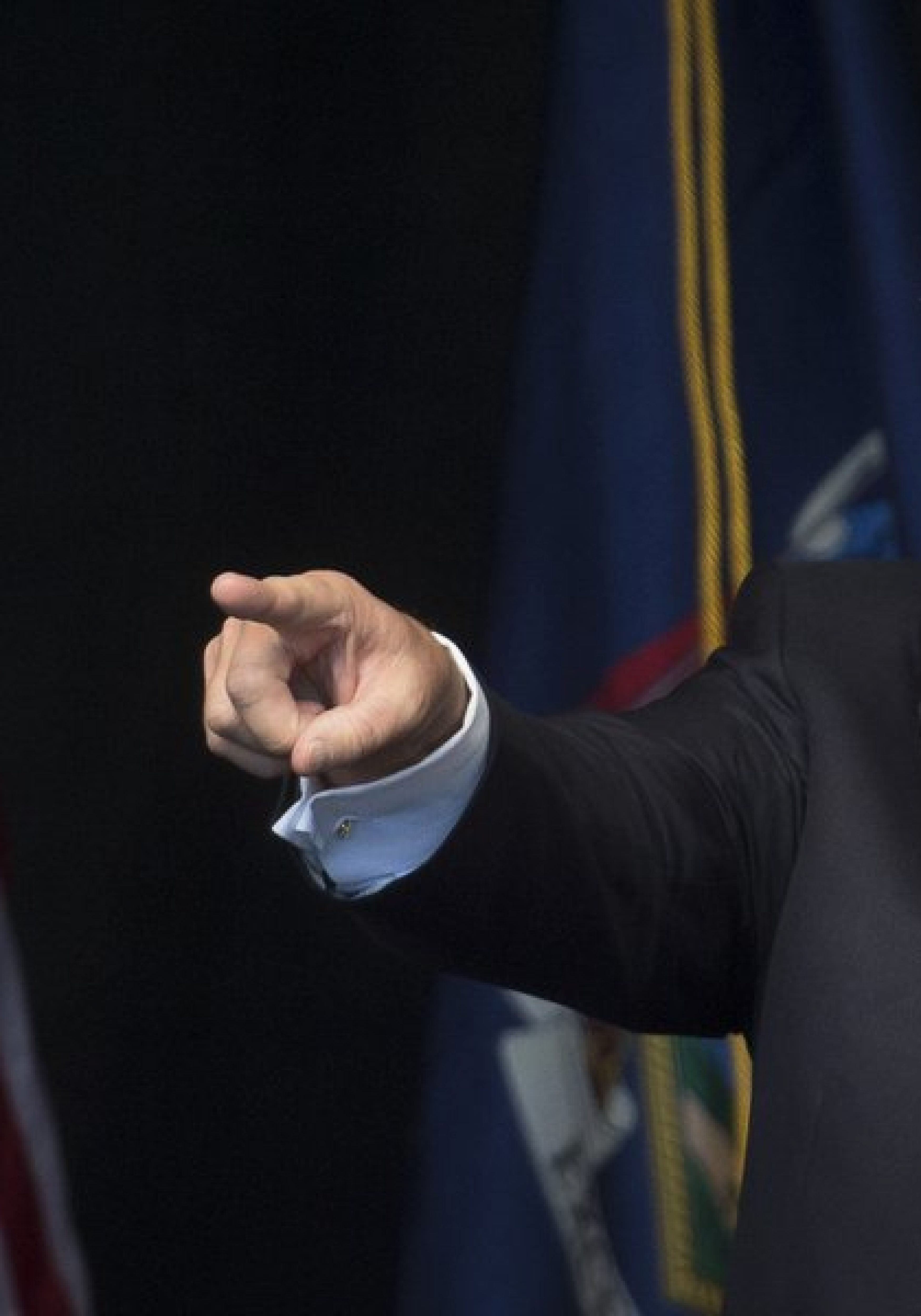 Donald Trump swept all five Republican primaries Tuesday, a commanding showing across the Northeast that keeps the Republican front-runner on his narrow path to the GOP nomination. Hillary Clinton carried Democratic contests in Maryland and Delaware, the start of what her campaign hoped would be a strong night for the former secretary of state.

Trump’s victories came in Maryland, as well as Connecticut, Delaware, Pennsylvania and Rhode Island. His strong showing was a blow to rivals who are running out of ways to stop the brash billionaire.

Clinton aimed to emerge from Tuesday’s contests on the brink of becoming the first woman nominated by a major party. She’s already increasingly looking past rival Bernie Sanders, even as the Vermont senator vows to stay in the race until primary voting ends in June.

Sanders spent Tuesday campaigning in West Virginia, where he drew several thousand people to a lively evening rally. He urged his supporters to recognize that they are “powerful people if you choose to exercise that power.”

Still, there were some signs that Sanders’ campaign was coming to grips with his difficult position. Top aide Tad Devine said that after Tuesday’s results were known, “we’ll decide what we’re going to do going forward.”

Trump’s victories padded his delegate totals, yet the Republican contest remains chaotic. The businessman is the only candidate left in the three-person race who could possibly clinch the nomination through the regular voting process, yet he could still fall short of the 1,237 delegates he needs.

GOP rivals Ted Cruz and John Kasich are desperately trying to keep him from that magic number and push the race to a convention fight, where complicated rules would govern the nominating process. The Texas senator and Ohio governor even took the rare step of announcing plans to coordinate in upcoming contests to try to minimize Trump’s delegate totals.

But that effort did little to stop Trump from a big showing in the Northeast.

Cruz spent Tuesday in Indiana, which votes next week. Indiana is one of Cruz’s last best chances to slow Trump, and Kasich’s campaign is pulling out of the state to give him a better opportunity to do so.

“Tonight this campaign moves back to more favorable terrain,” Cruz said during an evening rally in Knightstown, Indiana. His event was held at the “Hoosier gym,” where some scenes were filmed for the 1986 movie, “Hoosiers,” starring Gene Hackman as the coach of a small-town Indiana basketball team that wins the state championship.

Trump has railed against his rivals’ coordination, panning it as “pathetic,” and has also cast efforts to push the nomination fight to the convention as evidence of a rigged process that favors political insiders.

Yet there’s no doubt Trump is trying to lead a party deeply divided by his candidacy. In Pennsylvania, exit polls showed nearly 4 in 10 GOP voters said they would be excited by Trump becoming president, but the prospect of the real estate mogul in the White House scares a quarter of those who cast ballots in the state’s Republican primary.

In another potential general election warning sign for Republicans, 6 in 10 GOP voters in Pennsylvania said the Republican campaign has divided the party — a sharp contrast to the 7 in 10 Democratic voters in the state who said the race between Clinton and Sanders has energized their party.

The exit polls were conducted by Edison Research for The Associated Press and television networks.

With his three victories Tuesday, Trump will win at least half of the 118 delegates up for grabs in Tuesday’s contests. And he has a chance to win a lot more.

In Pennsylvania, Trump collected 17 delegates for winning the state. An additional 54 delegates are elected directly by voters — three in each congressional district. However, their names are listed on the ballot with no information about which presidential candidate they support.

Those delegates will attend the GOP convention as free agents, able to vote for the candidate of their choice.

Democrats award delegates proportionally, which allowed Clinton to maintain her lead over Sanders even as he rattled off a string of wins in previous contests. According to the AP count, Clinton has 1,946 delegates while Sanders has 1,192.

That count includes delegates won in primaries and caucuses, as well as superdelegates — party insiders who can back the candidate of their choice, regardless of how their state votes.

Clinton’s campaign is eager for Sanders to tone down his attacks on the former secretary of state if he’s going to continue in the race. She’s been reminding voters of the 2008 Democratic primary, when she endorsed Barack Obama after a tough campaign and urged her supporters to rally around her former rival.

Ahead of Tuesday’s results, Senate Democratic leader Harry Reid said that while Sanders has run a “unique and powerful” campaign, he does not believe the Vermont senator will be the party’s nominee.

According to exit polls, less than a fifth of Democratic voters said they would not support Clinton if she gets the nomination. The exit polls were conducted in Connecticut, Pennsylvania and Maryland.

nextMitch Perry Report for 4.27.16 - Time for Hillsborough BOCC to make a decision