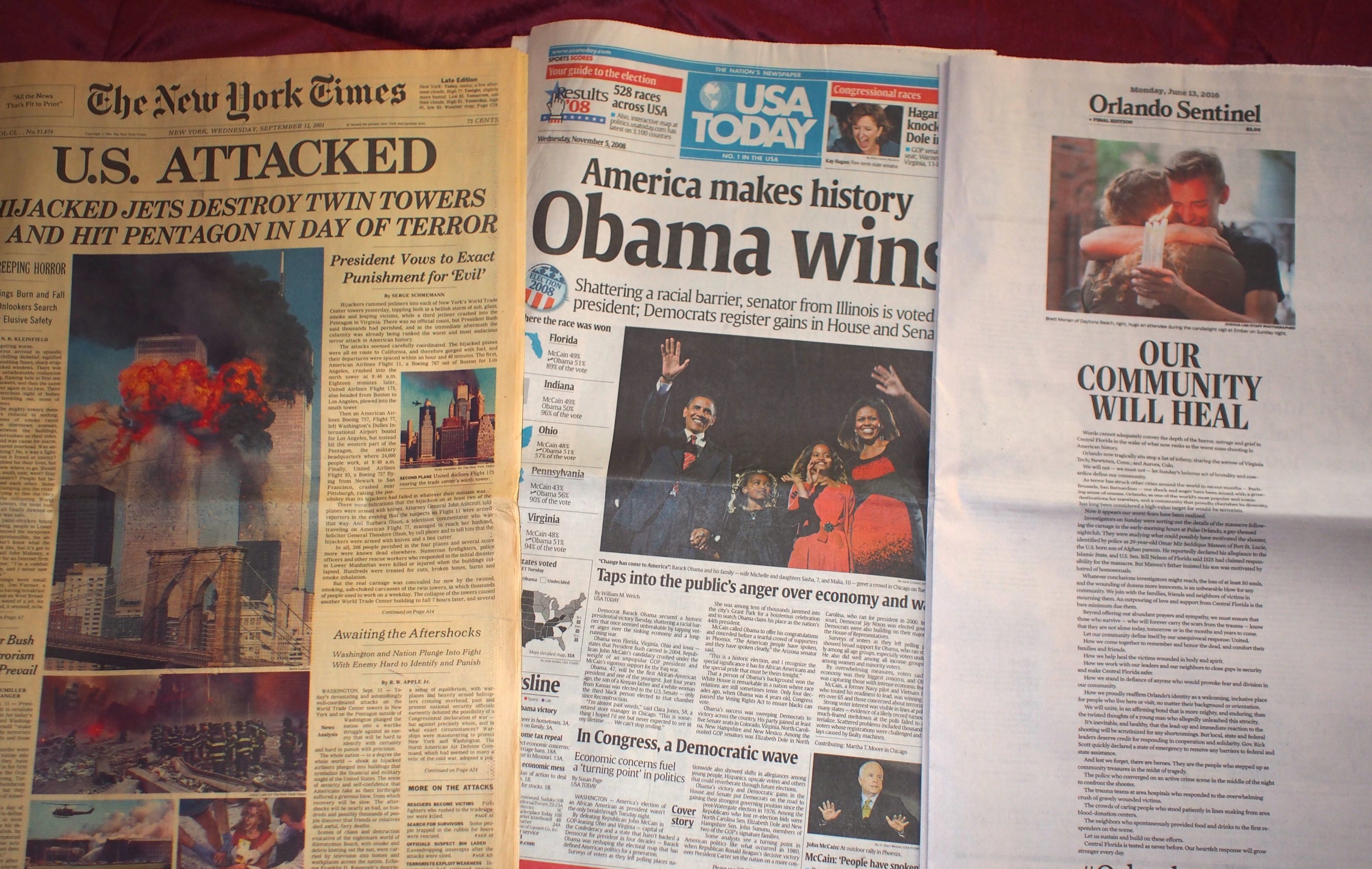 The seminal historic moments in our lives: for Americans today nothing comes close to 9/11, and the Pulse massacre in Orlando this summer is up there, according to a newly-released survey from the Pew Research Center for U.S. Politics and Policy.

The Pew survey taken last summer, then broken down by generation (Greatest, Silent, Baby Boomer, X, and Millennial,) various demographics and political leanings, found almost universal resolve that the Sept. 11, 2001, coordinated attack on New York’s World Trade Center, the Pentagon, and Flight 93 is the most significant historic event of our shared lifetimes.

The survey was conducted in association with A+E Networks’ HISTORY channel, and Pew published its report Thursday.

Many of the other events named on respondents’ top ten lists, such as the election of President Barack Obama, also were shared across all ages and diversities as uniting memories. Naturally, however, the younger generations left off events before their births that older generations considered seminal, starting with World War II and including such moments as President John F. Kennedy’s assassination and the moon landing.

One notable disagreement: Blacks most commonly named Obama’s election as a historic moment, though it was within the margin of error with second-ranked 9/11.

The June 22 mass shooting at Orlando’s popular gay nightclub Pulse was still fresh in everyone’s minds when Pew conducted the poll of 2,025 American adults in late June and July, and the tragedy made it onto most lists. Millennials in particular were touched by the moment, listing it as the sixth most profound of their lifetimes. Overall it ranked 10th for all Americans.

Overall, 9/11 was named on 76 percent of the lists; while Obama’s election ranked second at 40 percent; and a hard-to-define moment, “the tech revolution,” was third at 22 percent.

Pew claimed a margin of error of 2.3 percent for such general findings, and up to 7.8 percent for demographic-specific findings.

“The perceived historic importance of the attacks on New York and the Pentagon, span virtually every traditional demographic divide,” concluded the Pew report, written by Claudia Deane, Maeve Duggan and Rich Morin. “Majorities of men and women, Millennials and Baby Boomers, Americans with college degrees and those without a high school diploma rate 9/11 as one of the 10 most historically significant events to occur during their lifetime. And while they seem to agree on little else this election year, the survey finds that more than seven-in-ten Republicans and Democrats name the attacks as one of their top 10 historic events.”

Rounding out the top ten most-mentioned overall were the Kennedy assassination, the Vietnam War, the Iraq/Afghanistan wars, the moon landing, the fall of the Berlin Wall and end of the Cold War, the legalization of gay marriage, and the Pulse massacre. Because the Orlando event was so recent at the time of the survey, Pew also listed the 11th-ranked event, the Gulf War, which was within the margin of error with Pulse regardless.

Pew combined results for the Greatest and the Silent generations, all born before 1946. They listed World War II as second behind 9/11, and also included the Civil Rights movement and Korean War among top seminal moments.

Baby Boomers, born between ’46 and 1964, had the Kennedy assassination second, and also included the Civil Rights movement and the assassination of the Rev. Martin Luther King in their top 10.

The Millennial Generation, born after 1980, had Katrina, Columbine, the death of Osama Bin Ladin, the Sandy Hook Elementary School shooting, the Boston Marathon bombing, and the Great Recession among unforgettable moments.

Pew also asked everyone what they considered the best and worst historic moments of their lifetimes. Americans said they were most proud of the country’s response following 9/11. The second most proud moment was Obama’s 2008 election.

On the other hand, Obama’s 2008 election also was the most commonly-cited most disappointing moment.