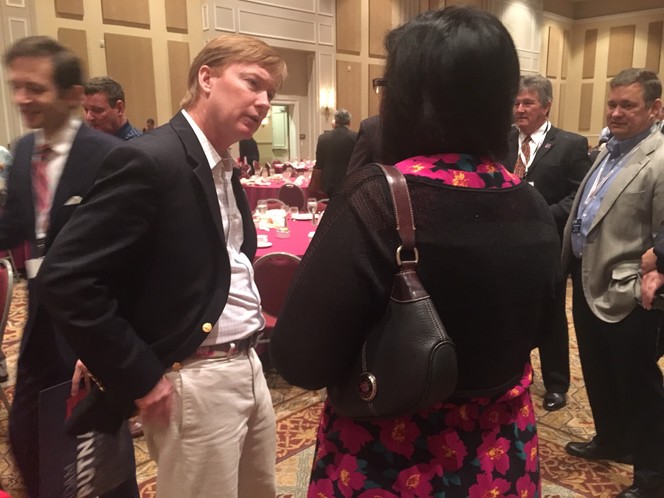 Florida’s next governor won’t be elected for more than a year, but Republican leaders from across the state got a taste of what’s in store — literally — during a gathering in Orlando this weekend.

Over ice cream and petit fours Friday night, party faithful heard from state Sen. Jack Latvala, a Clearwater Republican who filed paperwork to run for governor hours before appearing at the popular desserts event and is expected to formally announce his entree into the race Wednesday.

On Saturday morning, Agriculture Commissioner Adam Putnam — who has been running for months to replace Gov. Rick Scott — delivered a classic campaign speech over eggs, bacon and orange juice, winding up the “Up & Adam” breakfast by giving away a bag full of swag.

Later Saturday, Congressman Ron DeSantis addressed a local caucus, sharing his frustration about the GOP’s inability to follow through on President Donald Trump‘s pledge to “drain the swamp,” something DeSantis blamed on Republicans in the U.S. Senate. The Palm Coast Republican is mulling a bid for governor but said he won’t make a decision until sometime this fall at the earliest.

Just one of the Republicans thus far considering joining the race — House Speaker Richard Corcoran, R-Land O’ Lakes — did not attend the Republican Party of Florida’s quarterly meeting at the Rosen Shingle Creek Resort, which drew local party leaders who will play a critical role in what will almost certainly be a contentious GOP primary.

Putnam — who mentioned “the American dream” at last a half-dozen times — delivered a 30-minute speech that was a mix of folksy charm and retail politics, with a splash of disdain for liberals like the group People for the Ethical Treatment of Animals, or PETA.

Putnam complained about receiving “hate mail from those freakin’ dudes at PETA,” prompted by his and his daughter’s participation in the Wausau Possum Festival, an annual Panhandle event where candidates hold a live possum by the tail. He then handed out red “Possums for Putnam” T-shirts, along with elephant-themed ties and scarves, as well as baseball caps and cell phone chargers emblazoned with his campaign logo.

“I know our state. I’ve been down every dirt road. … I know all the best barbecue restaurants,” Putnam, who won races for agriculture commissioner in 2010 and 2014, told about 200 breakfast goers Saturday.

Putnam, a former congressman who’s also made a pivot to the right over the past few months, urged Republicans to join forces and issued a warning that “the left is coming for us” in Florida, pointing to “sanctuary cities” as “the kind of foolishness” Democrats support regarding immigration policy.

And Putnam, 43, bragged about the expansion of the state’s concealed-weapons licenses under his watch, saying Florida’s crime rate is at its lowest point in decades.

“I think there’s a connection,” said Putnam, whose agency oversees the licenses.

Putnam’s fiery speech was a contrast to Latvala’s brief remarks at the dessert event Friday night.

The Clearwater lawmaker highlighted his longtime participation in Florida GOP politics, dating back to 1975 when Republicans were vastly outnumbered in the Legislature by Democrats.

Latvala, a moderate, also painted himself as a mature businessman who has the life experience other candidates may not share.

“When I look at some of the other people who are thinking about running, or who are running, I see people who have been in government their entire life, that have never made a payroll, that have never written a workers’ comp premium check, that have never had the challenges that those of us that have businesses have,” Latvala, 65, said. “I just think that’s an important dimension for the party that nominated Donald Trump, as a businessman, to be different in government. It’s important for us to continue with that kind of approach, someone who has both some business experience and some government experience.”

The quarterly meeting came at a critical juncture for Republicans throughout the country, with many of the party’s most loyal members fuming after the U.S. Senate failed to adopt a measure to repeal and replace the Affordable Care Act, one of Trump’s top priorities.

Many of the party leaders gathered in Orlando expressed concern that the lack of movement by Republicans in Washington could have a negative impact on the GOP’s chances in Florida next year.

“If they don’t get the health-care law changed and put through tax reform PDQ, I think we’re in serious trouble in the next elections,” Walton County Committeeman Bill Fletcher told The News Service of Florida on Saturday.

Speaking to a caucus meeting Saturday morning, DeSantis was asked if the Republican Party is at a “tipping point,” given voters’ dissatisfaction with Washington.

Voters need to be convinced “that things are changing for the better,” DeSantis said in an interview later.

“And that requires you to actually accomplish some things. So I think the danger for us is, if we’re not successful on doing some of these items we promise, that the average voter is like, it doesn’t matter who you elect, nothing’s going to change,” he said. “I think the party right now, we’re teetering on, is this really going to be a big disappointment or are you going to be able to rack up a couple of victories.”

In the meantime, Florida GOP leaders are struggling to capture voters who overwhelmingly backed Trump but may have been registered as independents or Democrats.

“We need to meld the Trump supporters with being Republican,” national Committeeman Peter Feaman told a meeting of state committeemen and committeewomen Friday.

Feaman offered some talking points to convince voters to join the GOP, saying if they believe in “peace through strength,” “putting American workers first,” for example, “then you’re a Trump supporter but you are also a Republican.”

Florida Republicans “haven’t recovered from the presidential election, as a party,” said Scott Hopes, a Manatee County School Board member.

Hopes pointed out that Scott hasn’t attended an RPOF meeting “in years,” and that, aside from Putnam, none of the state’s Republican Cabinet members had bothered to show up, either.

Next year’s elections “are going to be a challenge,” Hopes said. “The Democrats are on the same page, at least. Unfortunately, I think we’re not”

previousTakeaways from Tallahassee — A billion-dollar fight over bonds