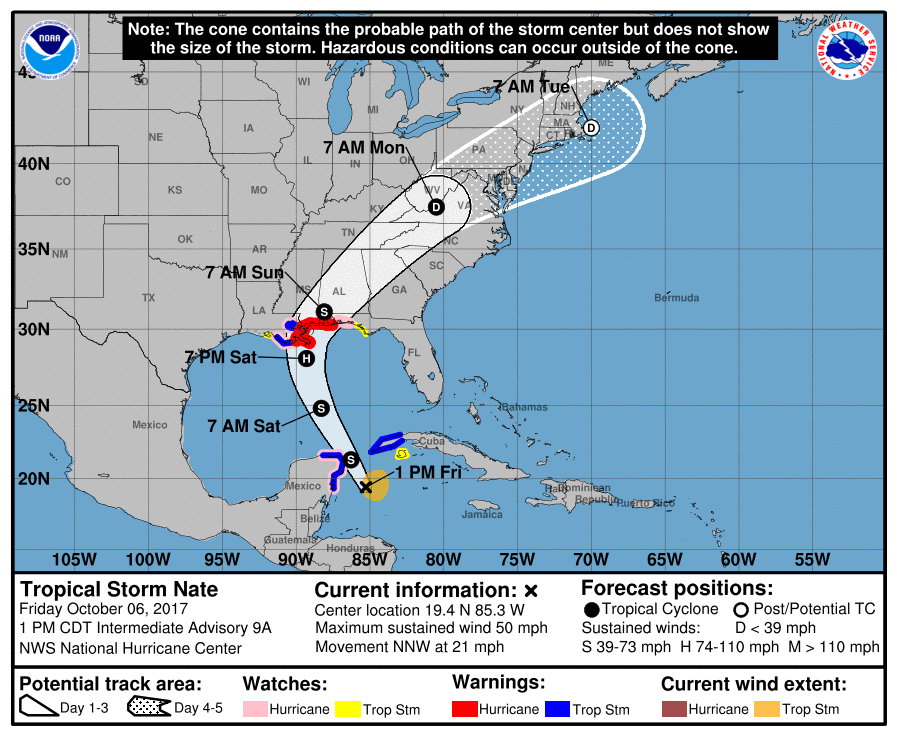 Florida’s western Panhandle, the one area of the state spared the impact of Hurricane Irma nearly a month ago, is expected to get winds, surging water and rain this weekend from fast-moving Tropical Storm Nate.

A hurricane watch was in effect Friday afternoon in Florida from the Alabama border to the county line of Okaloosa and Walton counties. A tropical storm watch was in place from the Walton County line to Indian Pass, which is south of Port St. Joe in Gulf County.

A storm surge watch covered the coast from the Alabama state line to Indian Pass, including Pensacola, Fort Walton Beach and Panama City.

A watch means the conditions could arise within the next 48 hours.

A 2 p.m. forecast from the National Hurricane Center put Nate on course to become a hurricane Saturday afternoon, come ashore that night in Louisiana or Mississippi and then veer east as a tropical storm.

A hurricane warning is in place from Grand Isle, La., to the Alabama-Florida border.

Florida emergency-management officials have been coordinating with fuel suppliers, grocers and utilities to prepare for the storm.

Scott cautioned people to keep an eye on the storm, noting that Hurricane Harvey, while in the Gulf of Mexico in August, went from a tropical system to a Category 4 hurricane in under 48 hours before making landfall in Texas.

But Scott also said Florida is in a better position with Nate than Irma because there aren’t concerns about fuel shortages, as was the case before powerful and deadly Irma swept through the state Sept. 10 and Sept. 11.

“With regard to Irma it was right after (Hurricane) Harvey, the refineries were shut down, so going into Irma we were low on fuel,” Scott said. “We are not low on fuel. We’ve been having daily calls with the oil companies, all the suppliers, so we’re not short today like we were walking into Irma. We were worried that we wouldn’t have enough fuel to make sure everybody could evacuate. That’s not true today.”

Nate has already been blamed for at least 22 deaths in Central America.