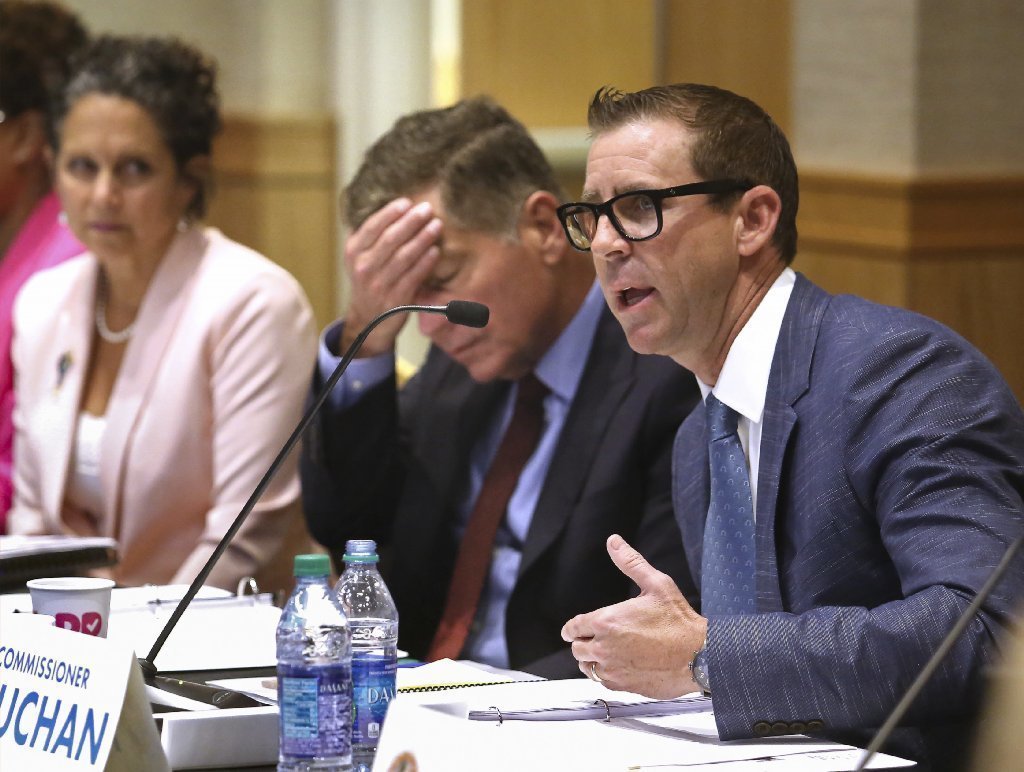 When they go to the polls in November, voters could face a dozen ballot measures from the Florida Constitution Revision Commission, under a plan advanced Wednesday.

The plan, which received preliminary approval from the commission’s Style and Drafting Committee, groups 24 proposed changes to the state Constitution into 12 ballot measures for the Nov. 6 general election.

The proposed ballot measures, if approved by the full commission, would be added to five proposed constitutional amendments already on the 2018 ballot.

— A ban (Proposal 65) on workplace vaping or electronic cigarettes with a ban (P91) on offshore drilling for gas and oil in state waters.

— Three public-school issues, including an eight-year term limit (P43) for school board members and a requirement (P10) that students be educated in “civic literacy.”

— Three judicial or criminal justice issues, including a measure focused on victims’ rights (P96) and a proposal (P41) that would increase the mandatory retirement age for judges from 70 to 75.

— Two higher-education measures combined with a proposal (P49) to provide survivor benefits to families of police officers, other first responders and Florida-based military members who are killed in the line of duty.

— Four “government structure” measures, including a proposed requirement (P13) that constitutional officers such as sheriffs be elected officials in charter counties and a proposal (P103) for the annual legislative session to begin in January in even-numbered years.

— Three “clean up” measures, including eliminating a defunct reference in the Constitution to a high-speed rail system (P12) and the repeal (P3) of language aimed at preventing “aliens ineligible for citizenship” from owning land. The land-owning provision, which was aimed at Asian immigrants in the 1920s, was never enforced.

The 37-member Constitution Revision Commission meets every 20 years and has the unique power to place proposed constitutional amendments directly on the ballot. Each of the issues considered by the Style and Drafting Committee received an initial approval from the full commission but will ultimately need backing of 22 commission members to go on the ballot.

Along with the issues that have been grouped, the Style and Drafting Committee also decided to let six other constitutional changes remain as “stand-alone” proposals.

Commissioner Brecht Heuchan, chairman of the committee, said two measures were left as separate proposals because they may be amended. One proposal (P39) is an ethics measure, which includes a six-year lobbying ban for former public officials, while the other (P93) would allow the creation of “innovation” school districts.

Four other measures were left as stand-alone proposals because they were initially endorsed by the commission in votes that fell short of the 22 that will be necessary for any constitutional change to be placed on the ballot.

Those measures include a proposed ban (P67) on greyhound racing and a requirement (P29) that employers use a federal verification system to determine the immigration eligibility of workers.

Carey Theil, a lobbyist for Grey2K USA Worldwide, an animal-welfare advocacy group, said his organization supports the racing ban as a separate ballot proposal, while expressing confidence the final vote by the commission will exceed the 18 votes that proposal originally received.

Jack Cory, a lobbyist for the Florida Greyhound Association, which opposes the racing ban, said his group also supports leaving the measure as a separate ballot item. Cory said the proposal “does not belong in the Constitution” and that it should be a decision made by the full commission.

The Style and Drafting Committee also approved the “ordering” of the dozen ballot measures, beginning with the measure dealing with victims’ rights and judicial retirement ages and ending with the proposed greyhound-racing ban.

Heuchan said he looked back over the voting history of ballot proposals since 1998 and could not find any correlation between the ballot position and the fate of the measures, although he acknowledged it was an informal survey. He said other factors seemed to impact the amendments more, including the visibility of the issues with voters and whether advocacy groups were campaigning for or against the proposals.

With the prospect of the commission advancing a dozen additional ballot measures, Heuchan said “decision fatigue” by voters is a factor that the commission will have to consider before its final decisions.

“This whole notion of fatigue is real. It’s a real thing,” Heuchan said.

The five proposed constitutional changes already on the November ballot include a measure to expand the homestead-exemption property tax break, a measure to restore voting rights to former felons and a measure to give voters the final authority in deciding whether to allow casino-style gambling.

The next major task facing the Style and Drafting Committee will be approving the ballot-title and summary language for each of the dozen measures. The titles are limited to 15 words, and summaries cannot exceed 75 words. Courts have held both must not mislead voters.

The commission faces a May 10 deadline for finishing its work.

nextLast Call for 4.4.18 — A prime-time read of what's going down in Florida politics