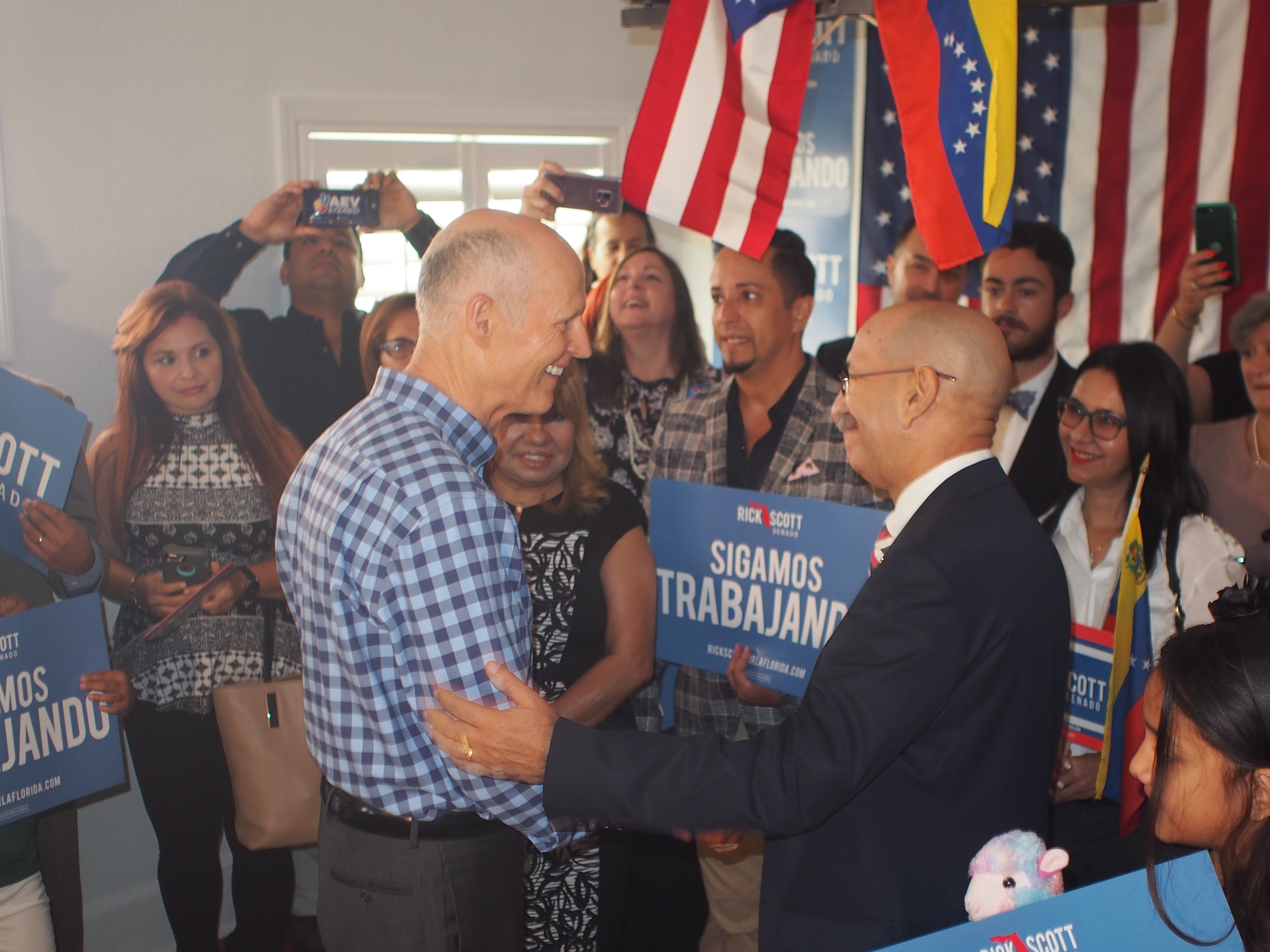 Gov. Rick Scott is taking an opportunity for some cross-partisan support for his U.S. Senate bid through some warm endorsements from Orlando-area Hispanic leaders with Puerto Rican, Venezuelan, Colombian followings.

In accepting the endorsements Tuesday, which included a couple from avowed Democrats, the Republican Governor spoke broadly of Florida welcoming all, making specific statements about the need to support the people in and refugees from Cuba, Venezuela, and Nicaragua, countries ravaged by socialist or communist dictators.

However, Scott stopped short of criticizing President Donald Trump‘s current zero-tolerance policies toward the tangled mix of illegal immigrants and refugees now flowing across the border. He also passed on a chance to offer any specific support for those seeking asylum from horrifying crime and political oppression, particularly in the generally right-wing Central American countries of El Salvador, Guatemala and Honduras.

The contrast showed the awkward position of a Republican with supportive policies and rhetoric of Hispanic newcomers to his state, in an era of Trump when much of the national Republican agenda runs counter, mainly relating to many of the Central American and Mexicans seeking to enter the United States.

In this setting, a campaign event in the offices of Suarez Realty in Orlando, the focus was on the Florida appeal built from his strong policies supporting the people of Cuba, Venezuela and the American territory of Puerto Rico. There also were people standing with Scott from Mexico.

Several Central Florida Hispanic spoke of Scott’s support for Puerto Rico and the services he offered Puerto Ricans who fled to Florida after Hurricane Maria; of his ban on Florida business with Venezuela and Cuba; his letters to other governors urging them to do the same; and also of his business-friendly policies, with one declaring, “If it’s good for businessmen, it’s good for employees too.”

William Diaz, an Orlando radio talk show host and leader of the international Venezuelan exile network, also made a personal point of contrasting Scott’s availability to that of his opponent, incumbent Democratic U.S. Sen. Bill Nelson.

Diaz had been trying for three and a half months to get an appointment to talk to Nelson about Venezuela, while Scott took and returned his calls on at least six occasions.

Scott proclaimed Florida to be the country’s great melting pot with 250 languages spoken, welcoming all.

Scott recalled meeting a woman from Puerto Rico who had taken refuge in Florida, and who told him she had no idea what would happen to her now, or who was going to help her.

Scott demurred when asked if those thoughts extended to other Central American countries which are currently the source of numerous immigrants including unknown numbers seeking, but not being offered refuge, and of Trump’s zero-tolerance policy toward them.

It’s up to Congress to determine what to do about the federal temporary protective status programs expiring for some refugees, he added.

“When I go to Washington, I want to be a doer,” Scott said but did not offer his personal support for the programs. “We do have to have a secure border. We have to have an immigration policy that works. If you look at what Washington’s done for decades, they’ve done nothing. And so we have this crisis on the border. We have a crisis every day. People should know how to come here legally. We should have a process where people know we want you in this country.”

“Immigrants have completely improved our state. We’ve got to do this on a legal basis,” he said. “We’ve got to come up with a way that, like with this issues on families, we have to be compassionate, but we’ve got to have a secure border.”