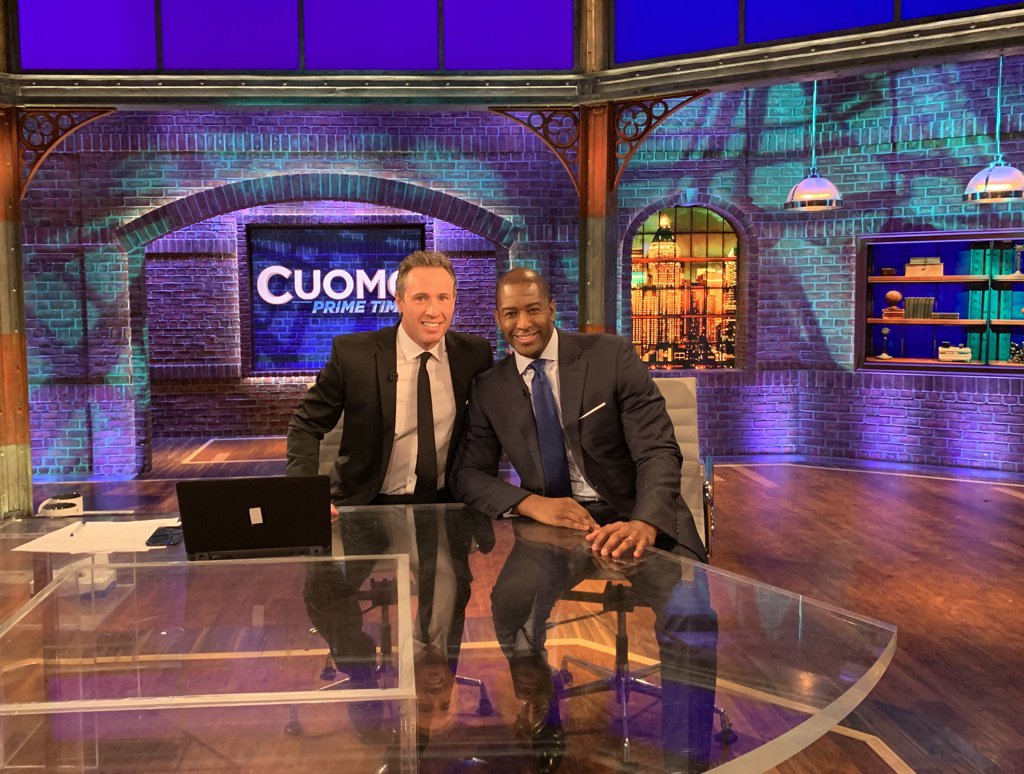 Not looking good: The possibility of ethics law violations is not a good look for newly anointed CNN political commentator Andrew Gillum. Image via Twitter.

The Florida Commission on Ethics released documents Wednesday supporting the panel’s unanimous finding of probable cause that Andrew Gillum, last year’s Democratic nominee for governor and a former Tallahassee mayor, violated ethics laws with trips to Costa Rica and New York and tickets to the Broadway hit musical, “Hamilton.”

In a 41-page report, the commission’s advocate, lawyer Elizabeth A. Miller, rebuked the former mayor for allegedly accepting gifts from Tallahassee entrepreneur Adam Corey and undercover FBI agents posing as developers. Corey had been a close friend of Gillum and lobbied the city commission.

Failing to report the gifts “is an obvious attempt to either conceal the gifts from the public or hide the fact that he accepted gifts from a lobbyist and principals of a lobbyist — both prohibited donors,” Miller said.

In a closed-door meeting Friday, the commission found probable cause that Gillum “accepted things of value based on an understanding his official action would be influenced and when he knew or should have known they were given to influence action in which he was expected to participate,” according to a news release distributed Wednesday.

The five charges carry potential sanctions of public censure and reprimand and fines of up to $10,000 each.

Gillum, who will request a hearing in the case, has steadfastly maintained that he hasn’t broken any laws or committed any wrongdoing.

“I am confident that as we move through this and as a judge looks at the facts, they will determine that I have acted in complete compliance with the law,” Gillum told CNN host Chris Cuomo Tuesday night.

Most of the communiqués revealed in Miller’s report had already been made public by Corey’s lawyer, Christopher Kise, in the days leading up to the November gubernatorial election, in which Republican Ron DeSantis narrowly defeated Gillum.

An FBI investigation into city corruption dogged Gillum throughout the final months of the campaign despite his insistence that he was not a subject of the probe.

The race against DeSantis placed Gillum, who had hoped to make history as the state’s first black governor, on the national stage, where the Democrat remains in the spotlight. The day before the ethics commission released the report about finding probable cause, Gillum joined CNN as a political commentator.

When asked about the probable cause findings Wednesday, DeSantis said he’s “moved on.”

“The fact of the matter is, if you’re doing that, you’re going to run afoul and there’s going to be a problem. But I’m not, like, rooting for him to fail. Look, the process will work, but I mean, I don’t have any ill will. I think he’s a talented guy. What I said in the campaign I think was accurate. But I’ve moved on,” he said.

The ethics commission investigation was sparked by a complaint filed by Tallahassee businessman Erwin Jackson and focused on New York and Costa Rica journeys, both made in 2016 while Gillum was still the city’s mayor and as he was pondering a gubernatorial bid.

Gillum and his wife, R. Jai, “accepted a ‘thing of value’ (i.e., gifts) when they received transportation, accommodation, services of a chef, and meals in regard to the Costa Rican trip with a value of $941.94,” Miller wrote in the advocate’s report.

Gillum claimed he paid Corey — who made the arrangements for a luxury villa — $480 in cash, or $120 per night, to cover his and his wife’s share of the trip. But Corey, who submitted an affidavit to the ethics commission but refused to appear before the panel because he had been subpoenaed by a federal grand jury in the city corruption probe, swore that he never received any money from his onetime pal.

Gillum also received a “thing of value” when he received a ticket to “Hamilton” and a private Statue of Liberty boat cruise, Miller found. The events totaled a minimum of $750, she wrote.

The report shows that Corey told Gillum the Hamilton tickets were provided by “Mike Miller,” an undercover FBI agent who also arranged the boat cruise for Corey, Gillum, and the mayor’s brother, Marcus.

In a sworn declaration to the commission, Gillum acknowledged he had received a text from Corey saying, “Mike Miller and the crew” had obtained tickets to “Hamilton” — which averaged around $750 each at the time.

“He did not say that Miller was treating anyone to the show and, in keeping with our consistent practice, I assumed we would each pay for our tickets,” Gillum said.

Gillum said his brother handed him the ticket, that the only information he had about Mike Miller paying for the tickets “is in the report of investigation filed in this matter,” which relies on information from Corey.

The New York trip was “a social excursion and no business was discussed at any time,” the former mayor said.

Gillum also said he not only paid Corey in cash for the Costa Rica lodging but “left an additional $150 in cash on a table to cover my share of tips for the cooks and cleaning staff.”

But the advocate Miller wrote that Corey and the undercover FBI agent courted Gillum with the hope that he would support their city-related endeavors.

The two men “had the requisite intent to gain access, familiarity, influence, and possible indebtedness with respondent when they provided gifts to him, his wife, and his brother,” she wrote.

“Respondent or his relatives were the recipients of those gifts while respondent simultaneously participated as a voting member on an entity that was approving issues that could benefit or harm the donors. Thus, the respondent either knew or should have known that the gifts were being provided to garner favor because respondent was in an official position to make decisions in matters directly involving Corey’s clients, Miller and Sweets,” she wrote, referring to another undercover FBI agent who went by the name of Mike Sweets.

Gillum was legally required to publicly disclose certain gifts, Elizabeth Miller wrote, noting that he disclosed free tickets to a “Jazz and Blues Festival” as gifts worth more than $100 in September 2016.

“Interestingly, respondent disclosed these tickets but chose not to report free transportation, services of a chef, meals, accommodations in a ‘beautiful mansion,’ Broadway tickets and a private boat cruise he accepted a month earlier and disclosable on the same form as the ‘Jazz and Blues Festival’ tickets. This omission is an obvious attempt to either conceal the gifts from the public or hide the fact that he accepted gifts from a lobbyist and principals of a lobbyist — both prohibited donors,” the advocate wrote.

Accepting the gifts, concealing their acceptance or “alleging without substantiation” that he or his brother reimbursed their hosts “demonstrates a wrongful intent and actions inconsistent with the proper performance of his public duties,” Miller found.

But, in a response to the advocate’s recommendation, Gillum’s lawyer Barry Richard wrote that the Gillums “did not, in fact, receive any gifts from Mr. Corey or any other lobbyist during the Costa Rican trip.”

Richard said the allegations against Gillum “hang on a very slender thread,” backed up only by Corey.

Gillum personally paid for airline tickets to and from Costa Rica and for expenses at restaurants and bars, and equipment rental while in the country, Richard wrote.

Gillum’s lawyer disputed other allegations made by Corey regarding expenses the former lobbyist claimed to have covered during the trip.

Richard accused Corey of a “false claim that the entire trip was a business expense of his corporation,” saying his accounting of the trip “is completely fictional.”

The trip to Costa Rica “was strictly a social gathering of a disparate group of Mr. Corey’s friends” in which no business was discussed, Richard wrote.

Gillum will have a public evidentiary hearing before an administrative law judge, Richard told The News Service of Florida on Wednesday.

“I have a high level of confidence that ultimately he’ll be exonerated. I don’t believe he did anything wrong, and I don’t believe there is any evidence to support any wrongdoing,” Richard said. “There’s no evidence he ever did anything for anybody in return for a gift. … This is all, frankly, trivial stuff.”