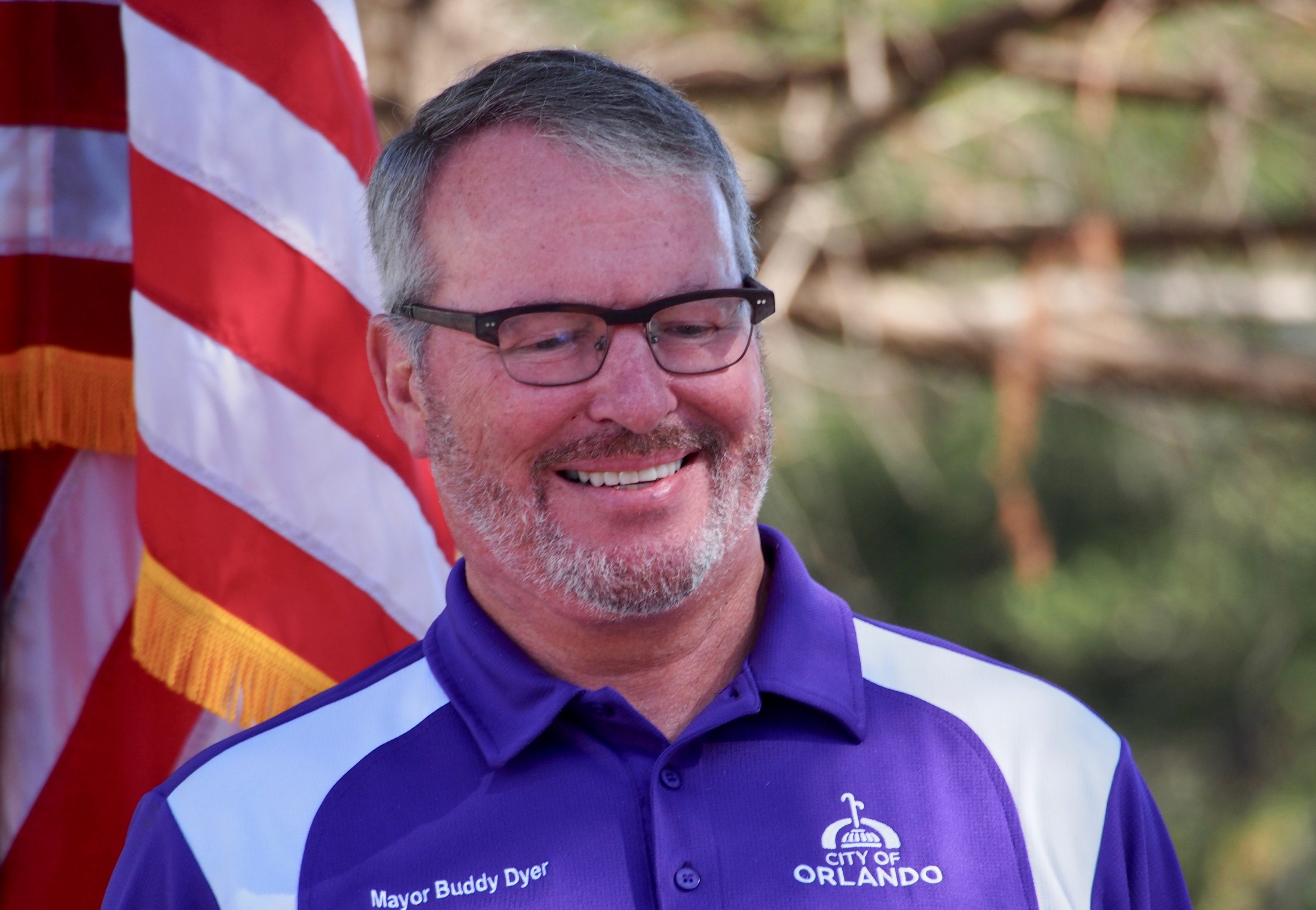 So far Dyer's re-election prospects have not drawn a major challenge.

Faced with only opposition from a City Commissioner he defeated easily 15 years ago, and another candidate who lost twice trying to get onto the commission, longtime Orlando Mayor Buddy Dyer intends to kick off his fifth reelection campaign with a rally Monday evening.

Dyer, 60, has just completed his 16th year in office leading the City Beautiful and has set his campaign kickoff address Monday evening at The Abbey, a downtown Orlando watering hole that is a favorite stop for Democrats.

Dyer, a Democrat and former state Senator, has won each of his previous re-election bids by more than 20 points, sometimes in multi-candidate fields. He last was re-elected in 2015 when he defeated Paul Paulson 63-33. The Orlando elections are non-partisan.

There is plenty of time for more candidates as the filing deadline is not until September, but so far the 2019 mayoral election is setting up as a rematch between Dyer and City Commissioner Samuel Ings, whom Dyer defeated in 2004 in a five-way Orlando mayoral election. Also in the field this year are Aretha Simons, who has twice run unsuccessfully for the commission; Jentri Casaberry and Shantel Bennett.

In February, his first month on the campaign, Dyer, a lawyer, raised $36,000 to start his campaign, including $5,000 of his own money. Ings, a retired police officer, entered the contest in late February and reported bringing in only $100. Simons, who runs a non-profit, has brought in about $33,000 so far in more than a year as a candidate, including $10,000 of her own money.

The other two have not raised any money.

The 2019 mayoral campaign likely will focus on Dyer’s leadership in development of two major new communities, Lake Nona on the far southeast side, and Creative Village Downtown, along with the city’s extension of bike trails and nurturing of community business districts through the Orlando Main Streets Program, and the state’s fastest-growing economy.

Yet the city struggles with affordable housing issues, a low-wage economy, and transportation and public transit shortfalls.

Dyers’ candidacy for another term comes even as the only other job he said he would ever be interested in pursuing is opening, the presidency of Orlando’s University of Central Florida. Dyer dismissed any interest in the job when UCF last launched a national search in late 2017, a search that resulted in Dale Whittaker getting that position.

With Whittaker’s resignation in February, the UCF board launched a new national search last week.

Ings’ candidacy has begun a scramble to succeed him in the commission’s District 6 seat, which represents Orlando’s southwest side. Former state Sen. Gary Siplin has filed for the seat, as has Bakari Burns, who runs a non-profit health care center for the homeless.

The other two commission seats thus far have drawn only the incumbents seeking re-election, Tony Ortiz in District 2, and Patty Sheehan in District 4.

previousHouse jumps into fight against human trafficking in hotels