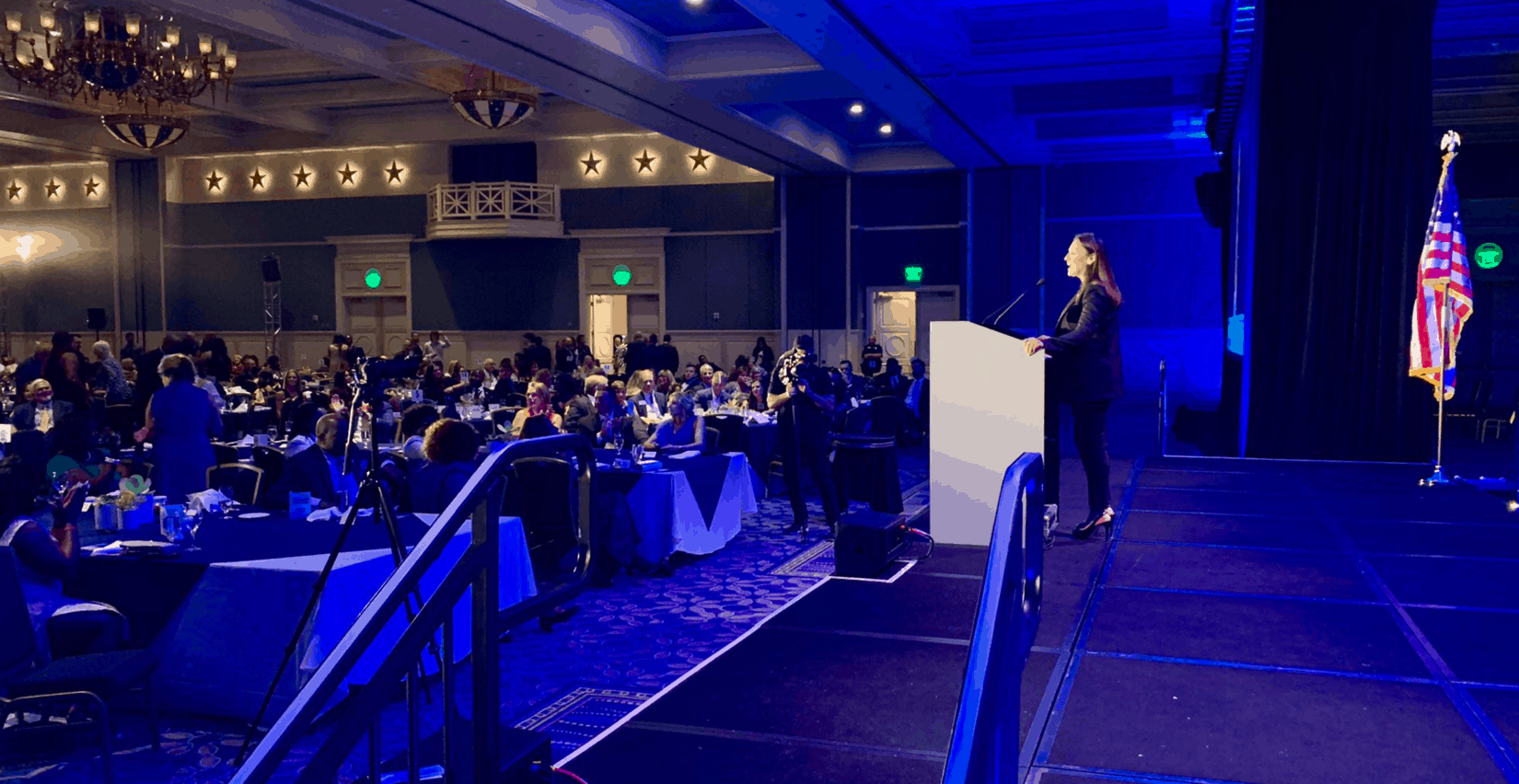 None of the major Democratic presidential candidates were at the Florida event.

That Democratic activists — so diverse in race, creed, sexual orientation, etc. — chose to meet at Disney’s Beach and Yacht Club, a monument that pays homage to the ultimate in WASP atmosphere and taste (there’s actually a bar on property named Martha’s Vineyard) should have been a warning sign that the Florida Democratic Party is as unsure as ever about its place in the political world.

Even though President Donald Trump is announcing his re-election campaign in Orlando in less than two weeks, and Florida promises to be crucial for any path to the White House, none of the major Democratic presidential candidates were at Leadership Blue since most of them were attending a competing event hosted by Iowa Democrats this weekend.

Because of that, it would be easy to label the FDP as one of the ‘losers’ emerging from the conference and gala.

But, we quickly add, anytime an organization pulls off an event this big (one estimate pegged that at least 900 people attended Saturday night’s gala) and no one is rushed to an emergency room, it is exempt from the L-column.

Still, that doesn’t mean there weren’t other winners and losers emerging from Leadership Blue.

Here are some of the W&Ls that really stood out:

Nikki Fried — With posters of her done up like Star Wars’ Princess Leia and billing herself as “A New Hope” (nice work there, Eric Johnson) the Agriculture Commissioner was, without a doubt, the biggest winner of the weekend. During her multiple appearances, gaggles, speeches, she delivered the kind of partisan stem-winders you won’t hear from her during Cabinet meetings.

Make no mistake, the FDP is her party now.

Tom Perez — Rubber chicken may have been what was for dinner at the gala, but the Democratic National Committee Chairman served up a speech chock full of red meat for the base. I’m not sure if writing that a Democrat served up red meat is the appropriate metaphor for the party, but Perez did hit all of the ‘Trump=bad’ talking points. The best section of his speech: “Fall in love with multiple people at one time. Date as many people as you want. And then when we have our nominee, fall in line together as Democrats.”

Kamala Harris — The California U.S. Senator was the only top tier candidate with a presence at the event. Her husband hit the convention all day on Saturday after a full day of networking on Friday. Sure, Democrats would have liked to see her in the flesh, but, overall, the weekend was a win for her.

John Delaney — In the face of many national Democrats, including Alexandria Ocasio-Cortez, suggesting he drop out of the presidential race, the former congressman had a visible presence at Friday’s night cocktail receptions. It probably won’t matter, but, hey, maybe he picked up a few volunteers.

Andrew Gillum — On the same day the Florida Ethics Commission approved a joint settlement agreement with the 2018 gubernatorial candidate, a crowd of activist Democrats cheered Gillum. That was when he said he’d endure all of the “slings” and “arrows,” (how Shakespearian!) while promising not to be distracted from the goal of flipping “Florida blue.” Gillum may be under a cloud of scrutiny, but nothing (to date) can stop him from starring in the never-ending hype video that is his political life.

Donna Shalala — She may have been the only member of Congress who stayed the entire weekend. She worked the convention crowd and it loved her for it.

Carlos G. Smith — The most dangerous place you could stand this weekend was between CGS and any number of his countless adoring fans hoping to pose for a picture with him. As a second-term Democratic lawmaker, he may not have much juice inside the Legislature, but he is a rockstar outside of it — at least to the progressive Dems on hand this weekend. Also drawing big cheers from the crowd: CGS’s legislative partner in crime, Anna Eskamani.

Andrew Warren — The Hillsborough State Attorney turned heads this weekend, while introducing himself to a statewide crowd. He did so well he even received a standing ovation from the black caucus.

The Diplomat — For years — and no matter how bad the WiFi was — this was the site of the Dems’ annual gala. But then this year, Terrie Rizzo and Co. decided to move it to the Disney Beach & Yacht Club. At first, that sounded wonderful. After all, it’s so much easier to travel to Orlando than Hollywood. But then the big-money, South Florida donors decided to stay away, so don’t expect the donkeys to return to The Mouse in 2020.

Democrat dads — The best change from previous annual gatherings was not scheduling it for Father’s Day Weekend. With that, plus the event being held at family-friendly Disney World, several dads took advantage of the opportunity to mix family and work. I think Kevin Cate and his family are still on the safari ride at Animal Kingdom.

Juan Cuba — The former head of the Miami-Dade Democratic Party has been a critic of the state party’s leadership, including Rizzo. Nothing that happened at Leadership Blue will short-circuit that criticism.

Screven Watson — Put the Democrats’ biggest event of the year on a Disney property and the veteran lobbyist appeared to be in hog heaven. From schmoozing up lawmakers and longtime friends to making sure everyone had tickets to events and a full cup of whatever they were drinking, Watson was busier than the concierge.

The media — With Matt Dixon and Gary Fineout on site, POLITICO Florida had a more robust presence than most presidential campaigns. But also shouts-out to Ana Ceballos of News Service of Florida, Steve Contorno of the Tampa Bay Times, George Bennett of the Palm Beach Post, Scott Powers of Florida Politics, and Mike Schneider of the Associated Press for giving up a fine summer weekend to cover the donkeys.

The bartenders at the Ale & Compass Lounge — I’m not sure how much the Florida Democratic Party made this weekend, but I’m confident the folks who did come home with some extra cash were those tending bar at the watering hole closest to the convention space. There were some elected Democrats who bypassed Saturday night’s gala entirely and just set up shop in the Ale & Compass. An hour into the gala, the place was packed.

Hakeem Jeffries — Reportedly, the House Democratic caucus chair gave the best speech of the night but there were so few people still awake/not at the bar by the time he spoke, it really didn’t matter.

Stephanie Murphy — Hey, Florida Democrats, you do realize she is one of the state’s most powerful members of the congressional delegation, right? You all may want to pay more attention to her/lavish more praise on her going forward.

Sean Shaw — The former state Rep. and candidate for Attorney General headed up the commission that was supposed to deliver an autopsy of the 2018 election, but his panel didn’t say much more than ‘We died in 2018’ and ‘Let’s not be Alabama.’ For that we should throw Shaw in the L-column, but he was so frank about what the party doesn’t know that it doesn’t know, that we’re putting him in the purgatorial category he clearly believes most Democrats reside.

Path to Power Commission — The panel established to examine past Democratic losses and cut a path out of the wilderness in future cycles essentially threw up its hands and said, “The f*ck if we know.” It didn’t help that the state party did not make results of a survey of local party officials available to the Commission.

Joe Biden — We understand that, because of a previous engagement, he was in neither Iowa or Florida this past weekend, but couldn’t Uncle Joe have recorded an original video message for his friends in the Sunshine State? Two minutes would have meant something.

Jay Inslee — Donate now at “what the f*ck is his website address”?

With this easy to memorize url, you too can donate to Jay Inslee. pic.twitter.com/slar0FxBzQ

Chasten Buttigieg — It was bad enough when almost all of the presidential candidates skipped the gala for a cattle call in Iowa, but it was really insulting when the spouses of the candidates started standing up Fla. Dems. (reportedly, he ran into a logistics snafu, as if Florida isn’t the most traveled to state in the country).

Wayne Messam — The only actual presidential candidate in attendance at the gala — who probably thought he was on his home turf — was seated in the very last row of tables. The Miramar mayor was closer to Disney Springs than he was to the stage.

Firebreathing Democrats — You want to talk about impeaching President Trump? Nope. You want a debate focused on climate change? Not gonna happen. But, please, tell AOC we said ‘hi.’

Bill Nelson — Receiving a “lifetime achievement” award from the state party felt like the most condescending ‘participation trophy’ ever handed out.

Audrey Gibson — I don’t know the Senate Democratic Leader well enough to say she was three sheets into the wind when she spoke on stage, but other people who do know her said exactly that after she appeared on stage with her fellow caucus members, half of which – remember – wanted to remove her mid-Session. We say, “Ooh yeah, hashtag awkward.”

The Orlando Sentinel — The statewide gathering of one of Florida’s two major political parties was in your backyard and you couldn’t bother to send a reporter? Yeah, it was a dumpster fire, but not sending a reporter creates a dumpster fire-vicious cycle: The event sucks because not enough media is there covering it because the event sucks.

The people who complained about Florida Crystals sponsoring a dessert reception — As Dixon reported, there were Democratic activists in attendance this weekend complaining about how their county parties don’t have enough money for basics like postage stamps. Yet some of the same people b*tched about about a major Florida company donating to the Dems’ sh*tty event. This is why you don’t have nice things, Fla. Dems.

Whoever didn’t put an order of events in the program for Saturday night’s gala — No one and I mean no one seemed to know WTF was going on Saturday night. Perez was the keynote speaker, but he spoke first. Then there’d be a video or a speech from a presidential candidate’s spouse or another video. No wonder most people would not STFU while those on the stage were speaking.

Whoever thought it was a good idea to show a video touting the Democrats’ role in Hurricane Michael recovery — If you go by the Florida Democrats’ logic, somehow it was Florida GOP’s fault that 1) a hurricane hit the Panhandle and 2) the Trump administration did not respond quickly enough to it. Had Jimmy Patronis or Jay Trumbull or any other North Florida Republican been within driving distance of Leadership Blue, a fistfight may have broken out. Dems in the video also blamed, get this, the news media for the slow recovery. Huh?

Material from the Associated Press and POLITICO were used in this post.

previousSunburn — The morning read of what’s hot in Florida politics — 6.10.19