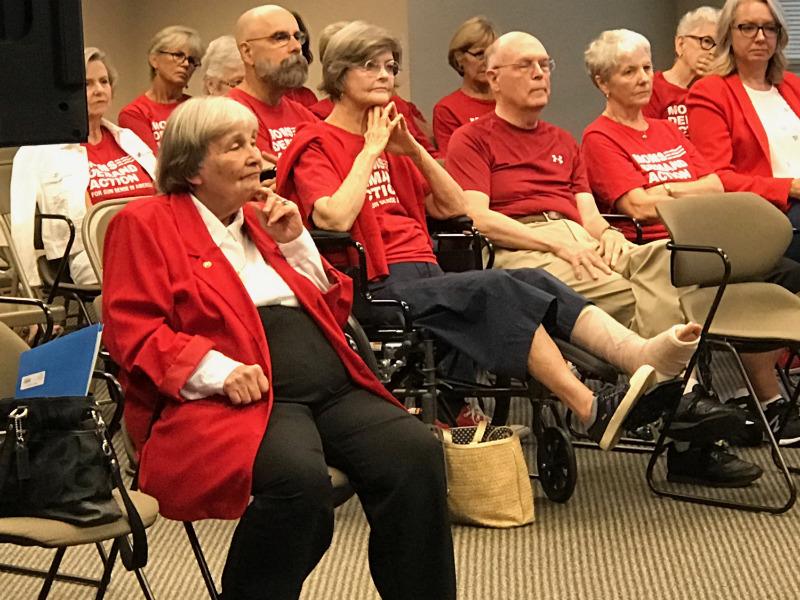 “Clearly the sponsors of the assault-weapons ban are confused and seem to be trying to confuse you and everyone else.”

Florida’s top gun lobbyist took a second shot Thursday at a proposed constitutional amendment that seeks to prevent the possession and sale of assault weapons.

Marion Hammer, a lobbyist for the National Rifle Association and Unified Sportsmen of Florida, appeared before state economists for the second time in a week to clarify her opposition to the proposal she claims would result in all rifles and shotguns being outlawed in the state.

Hammer, a former president of the national gun-rights organization, accused supporters of the ballot initiative of peddling an “abundance of erroneous information” about the proposal.

“Clearly the sponsors of the assault-weapons ban are confused and seem to be trying to confuse you and everyone else,” Hammer said. “No matter what people think the amendment says, no matter what they want it or don’t want it to say, it says what it says and it’s a disaster of confusion.”

The Financial Impact Estimating Conference is reviewing the potential economic impacts of the proposed amendment, as required by state law. The conference will hold additional meetings on Sept. 3 and Sept. 6, the state’s chief economist, Amy Baker, said Thursday.

Hammer a week ago warned the panel that the proposal, if approved by voters, would have a negative impact on more than 150 major gun manufacturers in the state.

The proposal, backed by the Miami-based political committee Ban Assault Weapons Now, would prohibit possession of assault weapons, “defined as semiautomatic rifles and shotguns capable of holding more than 10 rounds of ammunition at once, either in fixed or detachable magazine, or any other ammunition-feeding device.”

At a July 30 meeting, the economists struggled to reach consensus on what the language of the proposed amendment means.

Hammer noted the dilemma over the word “capable” in her remarks to the conference Thursday.

“There is no clarification, no qualifier, no modifier,” she said. “Anything you can do to a semi-automatic rifle or shotgun, to extend the capacity of rounds, means it is capable of holding more than 10 rounds at once.”

But Ben Pollara, the campaign manager for the political committee behind the proposal, blamed Hammer for “doing everything she can to try to confuse voters.”

“What we have in the amendment is very simple. If you have a semi-automatic rifle or shotgun that can accept a high amount of ammunition, 10 rounds or more, then it is prohibited. And if you own one of those guns when this is passed, then you can keep it,” Pollara told The News Service of Florida in a telephone interview Thursday afternoon.

The measure, which would not prohibit handguns, includes an exemption for military and law-enforcement personnel “in their official duties.”

The proposal would allow people who already own assault weapons at the time the constitutional amendment goes into effect to keep them, if they register the guns with state law enforcement.

“It isn’t terribly confusing, what this amendment does. We’re not trying to take anybody’s legally owned weapons. What we’re trying to do is stop the sale and future possession of military-type assault weapons that are capable of firing of a bunch of rounds in a very short time and killing a lot of people,” Pollara said.

Countering Hammer and other critics of the proposed amendment at Thursday’s meeting, Tom Enoch, a retired Tallahassee family practice physician, said human lives should be weighed above the economic benefits of selling guns.

“They can sell plenty of guns that are not weapons of mass destruction,” said Enoch, accompanied at the meeting by members of Moms Demand Action for Gun Sense in America, who were clad in the group’s iconic red T-shirts. “People did just fine hunting before they were widely available. I don’t see the need for those sorts of weapons for hunting.”

In late July, Attorney General Ashley Moody asked the Florida Supreme Court — which reviews the wording of ballot initiatives to make sure they meet certain legal standards — to keep the proposal off the 2020 ballot, arguing that it is “clearly and conclusively defective.”

Moody also focused on the use of the word “capable,” which she argued would “ban the possession of virtually every semi-automatic long-gun.”

Ban Assault Weapons NOW, which has been working in the wake of the massacres in 2017 at Pulse nightclub in Orlando and Marjory Stoneman Douglas High School in Parkland last year, is trying to get the assault-weapons measure on the November 2020 ballot.

As of Thursday, the state had received 104,070 valid petition signatures, up nearly 5,000 from late July, according to the Florida Division of Elections website.

previousJoe Gruters: How the left loses all credibility — Exhibit A