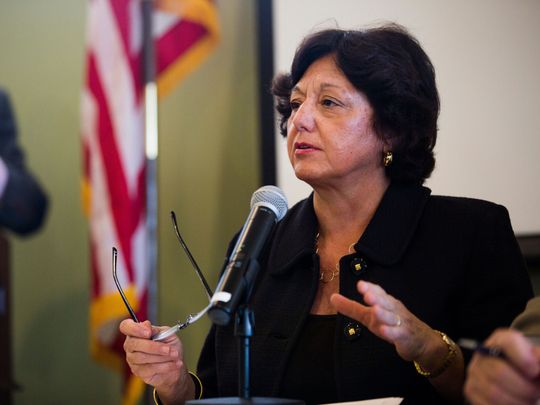 In three years, state Sen. Kathleen Passidomo plans to be President of the Florida Senate. But, right now, the Senate Republican Leader remains focused on her members’ needs in 2020.

“My priority is to make sure my caucus and their priorities are front and center,” the Naples Republican said ahead of the Legislative Session’s start.

That includes her own priorities, of course. The Southwest Florida Senator has been excited to see Gov. Ron DeSantis focus so much political energy on water quality. That has meant some record spending on Everglades restoration, and she anticipates more funding this year.

But she expects issues like school safety, criminal justice reform and infrastructure to be key issues, too.

She’s especially hopeful something can be done in Florida’s beleaguered prison system, one she thinks houses many people who should be on different paths.

“Our prison system is overcrowded,” she said. “We have way too many people in prison that should really be in treatment, including a lot of lower-level offenders that have substance abuse and mental health problems. They should not be warehoused in prison but we need to get them in treatment programs.”

Of course, that shows how complicated reform can get. If redirection out of prison means greater need for mental health funding or a fresh look at the opioid crisis, that will create its own set of complexities.

So Passidomo hopes the Senate this year addresses funding for more school counselors, something necessary for increasing mental health education.

And she wants to see something done to address long-term threats to the water supply. She represents a region of Florida that faced both red tide and blue-green algal blooms in one summer less than two years ago. She’ll be looking at policy recommendations from task forces on how to address issues in preventative ways.

“The bottom line is human impact on the environment, that there are things we do collectively and individually,” she said. “What are the policies behind aging sewer treatment plants and sewer systems? Or our aging septic and stormwater management systems? Water utilities? That’s a large part of the problems.

“We need to look more seriously at lessening impacts as the state continues to grow and more people need to live here. These are not a one-session, one-and-done thing. We need to be cognizant of the immediate issues and of the long-term viability of water systems throughout the state.”

Of course, that’s not the only multi-session project Passidomo has planned. One of her long-term goals is simply to develop stronger relationships both in the Senate and House.

She looks to the relationship between Senate President Bill Galvano and House Speaker Jose Oliva. “They are personal friends who work well together and I expect that to continue,” she said.

While Passidomo just secured the Senate presidency for 2022-’24 (assuming Republicans hold the chamber) a few weeks ago, she’s looking to develop a similar bond with state Rep. Paul Renner, who should become her counterpart if all goes according to (GOP) plan.

But Passidomo also prides herself on relationships across the aisle. She served with Senate Democratic Leader Audrey Gibson when both were in the House. And she’s working now with state Sen. Linda Stewart, an Orlando Democrat, on a guardianship bill (SB 994) that will be a priority for her this Session.

“When you look at most of the bills that pass, 98 percent of them are passed either unanimously or in a bipartisan manner,” Passidomo said. “The same thing with the budget. Everybody likes to glom onto the one or two policy positions that we differ on, but by and large, we deal in a bipartisan manner on issues we all care about.”

So she’s optimistic heading to Tallahassee.

“Of course, my glass is always half full.”