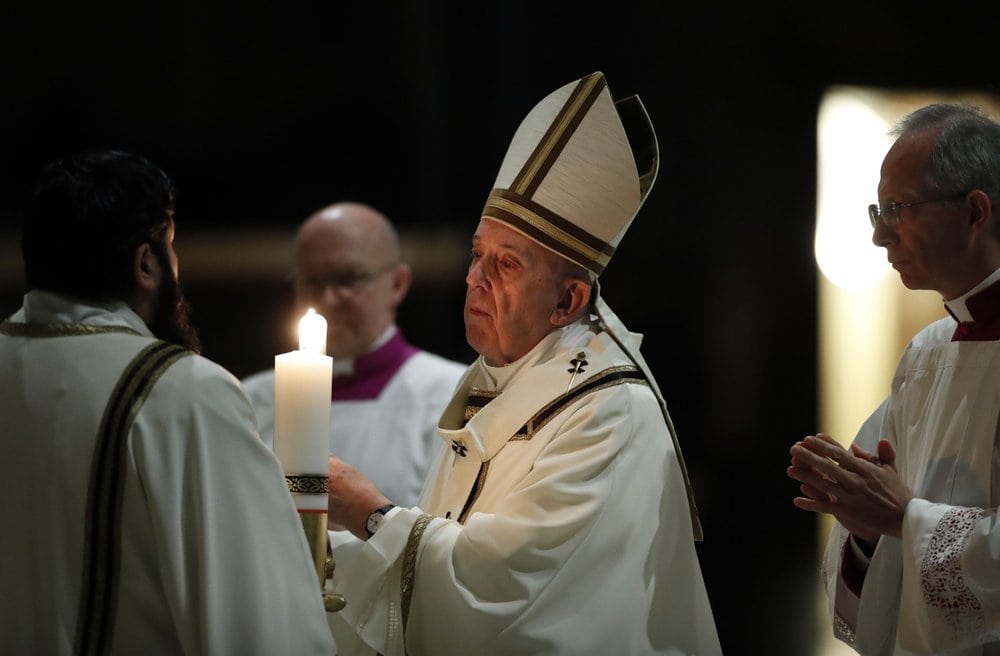 A message of hope.

Easter offers a message of hope in people’s “darkest hour,” Pope Francis said, as he celebrated a late-night vigil Mass Saturday in St. Peter’s Basilica, with the public barred because of the COVID-19 pandemic.

The pontiff in his homily likened the fears of current times to those experienced by Jesus’ followers the day after his crucifixion.

“They, like us, had before their eyes the drama of suffering, of an unexpected tragedy that happened all too suddenly,″ Francis said. ”They had seen death and it weighed on their hearts. Pain was mixed with fear” about their own lives. “Then, too, there was fear about the future and all that would need to be rebuilt.”

Francis added: “For them, as for us, it was the darkest hour.”

Easter vigil Mass in the basilica is among the Vatican’s more evocative ceremonies. Celebrants enter in darkness, except for candlelight. The pontiff holds a tall Easter candle, which is lit for him. Then the basilica’s lights are turned on, in a sign of joy. But this night, when the basilica was illuminated, all its emptiness was painfully visible, and the footsteps of the pope and his small entourage on the marble floor could clearly be heard as they walked in slow procession toward the altar.

Francis encouraged faithful to sow “seeds of hope, with small gestures of care, affection of prayer.”

“Tonight we acquire a fundamental right that can never be taken away from us: the right to hope,″ Francis said.

Still, he acknowledged the difficulty of obtaining optimism, saying “as the days go by and fears grow, even the boldest hope can dissipate.”

Describing the Easter message as a “message of hope,″ Francis urged Christians to be ”messengers of life in a time of death.”

During Easter vigil Mass, adults converting to Catholicism are baptized by the pope, but the pandemic containment measures forced elimination of that tradition during the ceremony.

Earlier on Holy Saturday, the Turin Shroud, a burial cloth some believe covered Jesus, and which was associated with a 16th-century plague, was put on special view in a chapel in that northern city, through video streaming to inspire hope during the coronavirus outbreak.

Francis hailed the initiative by the Turin archbishop, saying making it visible meets the requests of the faithful who are suffering through the COVID-19 outbreak.

The linen, kept behind bulletproof glass in a Turin chapel, is shown to the public only on very special occasions.

In the 16th century, Milan’s archbishop, the future St. Charles Borromeo, intensely desired to pray before the shroud while that city was ravaged by plague. The Duke of Savoy, in 1578, decided to bring the burial cloth of Christ from Chambéry, in France, to Turin, according to a Vatican account of that period.

Charles made the pilgrimage to Turin on foot, praying and fasting during the journey.

Skeptics say the linen bearing the figure of a crucified man is a medieval forgery. Believers regard it as one of Christianity’s most awe-inspiring reminders of Jesus’ crucifixion.

The cloth belongs to the Vatican, which has allowed its scientific testing.