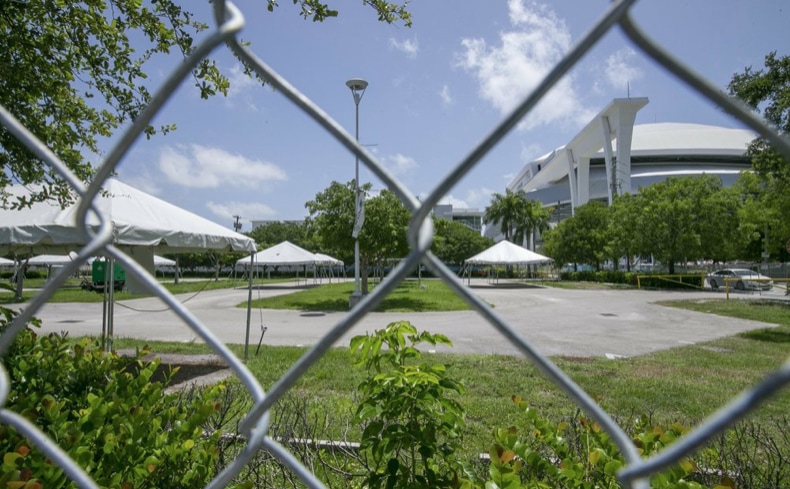 Hurricane Isaias’ imminent arrival forced the closure of some outdoor coronavirus testing sites Friday even as the state reached a new daily high in deaths.

Meanwhile, the virus was complicating efforts to put contingency plans in place for evacuations and shelters if the storm makes them necessary. Florida Gov. Ron DeSantis declared a state of emergency for all east coast counties from the Florida Keys to Jacksonville on Friday, but no evacuations had been ordered or shelters opened.

The coming weather forced officials to halt testing in Miami, which has been worst hit by the coronavirus, for at least three days because many of the sites operate outdoors, in tents. Under normal circumstances, the sites have the capacity to test hundreds of people per day.

“We had to put safety first,” Miami-Dade County Mayor Carlos Gimenez said at an online news conference Friday. “We will have thousands of tests that will not be conducted until we get these test sites up and running again.”

Hurricane watches and storm warnings were in effect in many areas of Florida’s east coast, prompting residents to buy sandbags and board up their homes. Isaias was forecast to strengthen Friday while moving near or over the Bahamas and was expected to approach South Florida on Saturday or Sunday.

Authorities said social-distancing measures necessary to stop the virus’s spread were complicating evacuation plans. The shelters must now provide 40 square feet (3.7 square meters) of space for each person, and can’t offer cafeteria-style dining. People in evacuation zones who are infected will be isolated in special areas at shelters.

“It’s a challenge, but these are some of the things you have to think about in the age of COVID-19 and now a hurricane,” Gimenez said. He said 20 shelters are on standby and have been modified to prevent the virus’s spread.

DeSantis said Friday that in preparation for hurricane season the state had created a reserve of personal protective equipment comprising millions of masks, gloves and gowns, thousands of coveralls and thermometers.

“While we do not currently believe shelters will be necessary for this storm, we will be ready,” he said. “There may be some areas – mobile homes – where those orders will be issued. But it’s a very fluid situation.”

DeSantis said the state’s Division of Emergency Management had prepared new shelter guidance for all Florida counties in light of COVID-19 and has shelter kits with hand sanitizer, masks and gloves ready to be deployed on request.

Tad Stone, emergency services director for Indian River County, said he did not think the area, which includes Vero Beach, will need to open its 18 shelters, but he said there is a new plan for managing them. Stone said people making use of shelters would have their temperature checked, would be spread out more and would receive box lunches.

“We’ve completely reworked the way we do shelters,” he said. “We’ve taken some pretty dramatic steps to make sure we can deal with both issues at the same time.”

The county is one of five currently under a hurricane watch. A storm warning — which means a storm is expected — is in effect in South Florida.