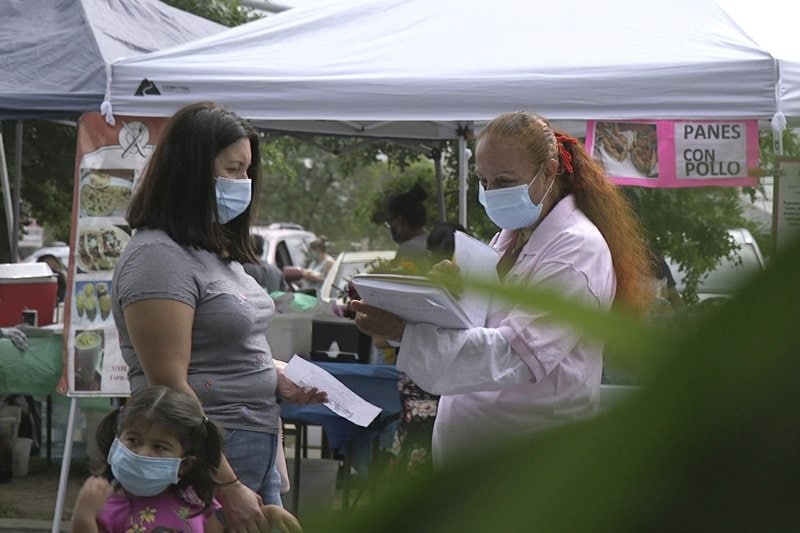 Several minority groups more at risk of hospitalization and death due to the virus.

In front of baskets of tomatoes and peppers, near a sizzling burrito grill, the “promotoras” stop masked shoppers at a busy Latino farmers market: Want to test a COVID-19 vaccine?

Aided by Spanish-speaking “health promoters” and Black pastors, a stepped-up effort is underway around the U.S. to recruit minorities to ensure potential vaccines against the scourge are tested in the populations most ravaged by the virus.

Many thousands of volunteers from minority groups are needed for huge clinical trials underway or about to begin. Scientists say a diverse group of test subjects is vital to determining whether a vaccine is safe and effective for everyone and instilling broad public confidence in the shots once they become available.

The expanded outreach by vaccine researchers and health officials is getting a late start in communities that, because of a history of scientific exploitation and racism, may be the most reluctant to roll up their sleeves.

Just getting the word out takes time.

“I didn’t know anything about the vaccine until now,” said Ingrid Guerra, who signed up last week at the farmers market in Takoma Park, Maryland, outside the nation’s capital.

The health promoters from CASA, a Hispanic advocacy group, explained how the research process works and how a vaccine could help end the coronavirus pandemic.

“I’m not afraid,” Guerra decided. “I want to participate for me, my family, my people.”

University of Maryland researchers agreed to set up a temporary lab at CASA’s local community center so that people struggling financially wouldn’t have to travel to participate.

The hardest part, many experts say, is gaining trust.

“A white guy from NIH is probably not going to be as effective by far in convincing somebody from a minority community that this is the kind of science they might want to trust, as would a doctor from their own community,” said Dr. Francis Collins, director of the National Institutes of Health.

Recruiting African Americans in particular will be “a heavy, heavy lift,” Collins said, because of the legacy of mistrust after the infamous Tuskegee experiment, when Black men in Alabama were left untreated for syphilis as part of a study that ran from the 1930s into the ’70s.

Some Black doctors, too, are wrestling with doubts. Dr. Tina Carroll-Scott, medical director of the South Miami Children’s Clinic, described a “really, really tough” time, considering the political influence that the Donald Trump administration has exerted on long-trusted health agencies like the Food and Drug Administration.

“Wondering whether that’s going to affect the trials and even the vaccine that comes out I think are all valid concerns,” said Carroll-Scott, who ultimately decided to recommend the studies. “We know that Blacks and Latinos are bearing the brunt of this virus and, yeah, we definitely need to make sure that this vaccine works for them.”

In the U.S., Black, Latino, Native Americans and Asians are more at risk of hospitalization and death from the coronavirus. Together they make up nearly 40% of the U.S. population, and an equitable vaccine study would match those demographics, though health officials would like to see even greater numbers.

As Moderna Inc. neared its goal of 30,000 study participants, some sites slowed recruitment in recent weeks to increase minority enrollment, now at about 28%.

Pfizer Inc., which recently asked the FDA for permission to expand to 44,000 volunteers, says about a quarter of its U.S. participants are from communities of color, more when counting trial sites in Brazil and Argentina. Both companies are having the most success in recruiting Hispanics.

“It’s really important that this vaccine work for everyone, or if it doesn’t, that we understand why,” said Dr. Susanne Doblecki-Lewis of the University of Miami, who is helping to test the Moderna vaccine. Researchers might need to compare the different vaccines “and see how one might better fit a population than another.”

A lack of diversity in the research would have ripple effects once any vaccine is approved for widespread use. Even before final testing began, a poll from The Associated Press-NORC Center for Public Affairs Research found just 25% of African Americans and 37% of Hispanics would get a vaccine once it’s available, compared with 56% of whites.

“If and when we have a vaccine ready, if you didn’t have enrollment of minorities, then people are going to say, ‘Why should I put the vaccine in myself?’” said Dr. Carlos del Rio of Emory University, another study site.

Yet too often, when Dr. Christian Ramers of Family Health Centers of San Diego tries to recruit, he is told: “How can you possibly expect me to be a guinea pig when time and again we’ve volunteered our community members and not seen the benefits of the research?”

A drug company said Friday that a medicine it sells to tamp down inflammation has helped prevent the need for breathing machines in hospitalized COVID-19 patients in the first large study that primarily enrolled Hispanics and Blacks.

Switzerland-based Roche reported the results for tocilizumab, sold now as Actemra and RoActemra for treating rheumatoid arthritis and some other diseases. The company said it would quickly publish the results, which have not yet been reviewed by independent scientists, and would speak with regulators about next steps.

The drug, given through an IV, tamps down a protein called interleukin-6 that’s often found in excess in COVID-19 patients. It failed in a previous study that tested it in people more severely ill from the coronavirus. The new study was done in the United States, South Africa, Kenya, Brazil, Mexico and Peru. About 85% of the 389 participants were Hispanic, Black, Native American or other ethnic or racial minorities. These groups have been disproportionately hurt by the pandemic.

About 12% given the drug needed a breathing machine or died within 28 days versus about 19% of patients given a placebo. Looked at separately, deaths were statistically similar in the two groups.

Theresa Hagen of Miami Beach, Florida, hopes she is a role model for other African Americans considering volunteering.

“I may be part of history right here,” she said after enrolling in the University of Miami’s study. The research “benefits not only African Americans but everyone in general.”

Researchers are gearing up to recruit thousands more volunteers over the next two months, as shots made by Johnson & Johnson and Novavax enter final testing and a paused study from AstraZeneca is expected to resume in the U.S.

NIH this week began a program to better inform minority populations about the vaccine studies — and other COVID-19 information — and awarded $12 million to help form “community engagement” teams in 11 especially hard-hit states.

And as part of the NIH’s COVID-19 Prevention Network, the Rev. Edwin Sanders II of the Metropolitan Interdenominational Church in Nashville is heading a separate national project for “faith ambassadors” and clergy to dispel misinformation about vaccines and research.

“We’re not trying to twist anybody’s arm,” said Sanders, who has spent decades working with AIDS researchers to increase Black participation in studies of HIV vaccines and treatments.

People will have reasonable questions and fears, he said. The key is bringing them together with scientists and trusted community leaders for respectful, open conversations.

previousHundreds of thousands still without power in Sally cleanup

nextPuerto Rico getting funds for power grid 3 years after Maria