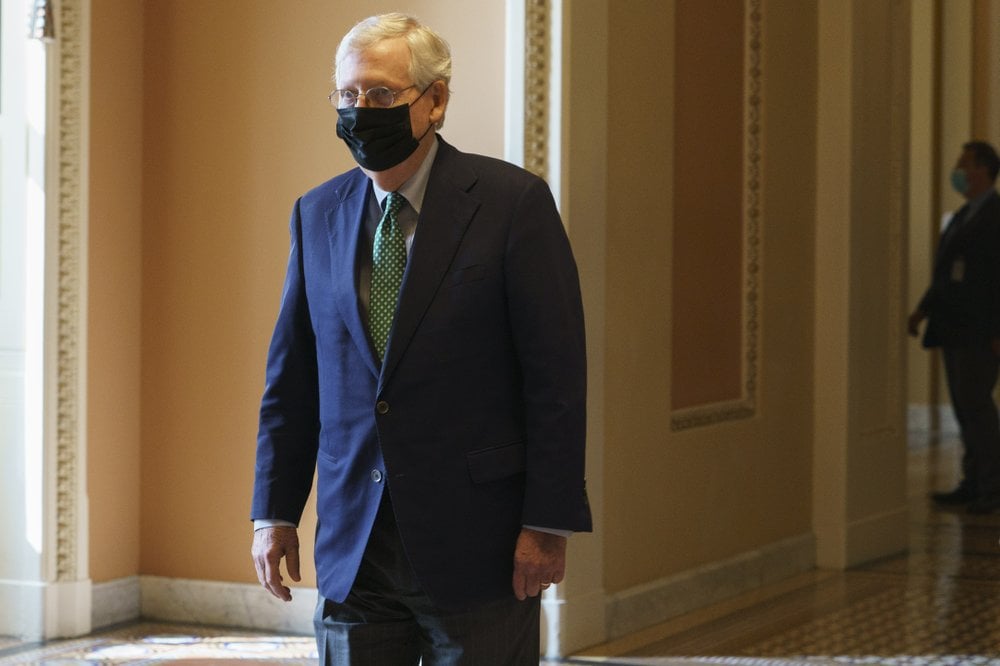 In their own words, then and now.

Republican senators weighing what to do about the vacancy on the Supreme Court are facing questions about their own past comments amid complaints by Democrats that their views have shifted with changing political reality.

President Donald Trump on Saturday urged the GOP-run Senate to consider “without delay” his upcoming nomination to fill the seat vacated by Justice Ruth Bader Ginsburg, who died Friday. The move comes just six weeks before the election.

A look at what key Republican senators were saying in the past — and what they are saying now — about filling a seat on the Supreme Court during an election year.

Senate Majority Leader Mitch McConnell, a Kentucky Republican, vowed in a statement Friday night, hours after Ginsburg’s death, to call a floor vote on Trump’s nominee, although he did not specify a date. McConnell, who sets the calendar in the Senate, has made judicial appointments a top priority.

McConnell’s statement on the latest vacancy stands in stark contrast to the position he took in 2016, when he refused to consider President Barack Obama’s choice for the high court months ahead of the election. McConnell blocked hearings for Merrick Garland, a federal appeals court judge, saying the choice should be left to voters in an election year.

Democrats said Republicans should follow the precedent they set in 2016 by not considering a Supreme Court choice in the run-up to an election, but McConnell’s comments make it clear he has no intention of doing so.

“Americans re-elected our majority in 2016 and expanded it in 2018 because we pledged to work with President Trump and support his agenda, particularly his outstanding appointments to the federal judiciary. Once again, we will keep our promise,” McConnell said.

U.S. Sen. Lindsey Graham, who will oversee the vetting of the nomination as Judiciary chairman, tweeted Saturday that he will support Trump “in any effort to move forward regarding the recent vacancy created by the passing of Justice Ginsburg.”

Graham’s comment contradicts his statements in 2018 and 2016 that a Supreme Court nominee should not be considered in an election year.

“If an opening comes in the last year of President Trump’s term, and the primary process has started, we’ll wait to the next election,″ Graham said in 2018 at an event hosted by The Atlantic magazine. Reminded that he was speaking on the record, Graham said: “Yeah. Hold the tape.″

Two years earlier, in the midst of the Garland battle, the South Carolina senator was even more emphatic, urging listeners at a Judiciary Committee meeting to “use my words against me. If there’s a Republican President (elected) in 2016 and a vacancy occurs in the last year of the first term, you can say Lindsey Graham said, ‘Let’s let the next President, whoever it might be, make that nomination.’”

Despite those comments, Graham said Saturday that he supports moving forward on a new nomination because Democrats had changed the Senate rules to confirm more circuit court judges during Obama’s tenure, and because Senate Democratic leader Chuck Schumer “and his friends in the liberal media conspired to destroy the life of Brett Kavanaugh and hold that Supreme Court seat open.”

Kavananugh was narrowly confirmed to the Supreme Court in 2018 after a bitter, partisan fight in which Graham played a key role to advance Kavanaugh.

U.S. Sen. Susan Collins, a Maine Republican who is considered a moderate, said Saturday that “in fairness to the American people,” the Senate should not vote on a lifetime appointment to the Supreme Court until after the election and that the nomination “should be made by the President who is elected on November 3rd.”

Collins voted in favor of Kavanaugh in 2018 — a vote that has played a key role in her reelection campaign. Liberal groups have targeted Collins over her support for Kavanaugh, and she trails her Democratic opponent in publicly released opinion polls. Her statement seems to leave open the possibility of supporting Trump’s nominee in the “lame duck” session after the election if Trump wins a second term.

U.S. Sen. Chuck Grassley, an Iowa Republican, drew condemnation from Democrats in 2016 when, as Judiciary chairman, he blocked confirmation hearings for Garland, who was nominated to the high court after Justice Antonin Scalia died unexpectedly in February 2016.

At the time, Grassley cited “the Biden Rule” in holding up the process. The informal “rule” — never adopted by the Senate in any formal sense — stemmed from a speech given by then-Sen. Joe Biden in 1992 that the Senate should not fill a Supreme Court vacancy until after the presidential election. Biden, who served as Obama’s vice president, is now the Democratic nominee for President.

More recently, Grassley told reporters in July that if he still chaired Judiciary and a vacancy occurred, “I would not have a hearing on it because that’s what I promised the people in 2016.”

Grassley issued a statement Friday night praising Ginsburg but did not comment on whether Trump should move forward with a replacement.

U.S. Sen. Joni Ernst, an Iowa Republican up for reelection this year, serves on the Judiciary panel. She said in July that in the event of a Supreme Court vacancy, the Senate should hold hearings on Trump’s nominee, even if he loses the presidential election in November.

Ernst’s campaign sent out a fundraising email Friday night saying: “Our Conservative values and Constitutional rights are now on the line. The next Supreme Court nominee will shape major decisions for decades to come.”

Ernst issued a statement later Friday saying the email “never should have gone out.”

“Though I never saw it, it was sent out under my name and I take responsibility for it,” Ernst said. “Tonight, my prayers are with the family of Justice Ginsburg.”

U.S. Sen. Lisa Murkowski, an Alaska Republican who opposed Kavanaugh’s confirmation, said in an interview hours before Ginsburg’s death that she “would not vote to confirm” her replacement before the next President is inaugurated.

Her comments to Alaska Public Radio on Friday also occurred before McConnell said the Senate will vote on Trump’s nominee to replace Ginsburg. Murkowski’s comment appeared to put her at odds with McConnell, who will need at least 50 votes to push a Trump nominee through the Senate, plus a tie-breaking vote by Vice President Mike Pence.

Murkowski, like Collins, issued a statement after Ginsburg’s death that praised her but did not mention whether she’d favor voting on a Trump pick to replace her.

U.S. Sen. Thom Tillis, a North Carolina Republican who serves on the Judiciary panel, was among several GOP senators in tough reelection battles to join Trump in calling for a swift vote on a Supreme Court nominee. Arizona U.S. Sen. Martha McSally and Georgia U.S. Sen. Kelly Loeffler — both appointed to their seats — also called for a quick vote.

“There is a clear choice on the future of the Supreme Court between the well-qualified and conservative jurist President Trump will nominate and I will support, and the liberal activist Joe Biden will nominate and Cal Cunningham will support, who will legislate radical, left-wing policies from the bench,” Tillis said on Twitter, referring to his Democratic opponent, former state Sen. Cal Cunningham.

In 2016, Tillis opposed giving Merrick Garland a hearing, saying “the voice of the American people should be weighted heavily” in filling a Supreme Court vacancy, adding that the nomination “would be best left to the next President.″

U.S. Sen. Mitt Romney, a Utah Republican who was the sole GOP senator to vote in favor of Trump’s impeachment, issued a statement Friday praising Ginsburg, but did not comment on whether he would support a vote on Trump’s nominee.

His spokeswoman called a report that Romney would insist on delaying the vote until after Inauguration Day “grossly false.” Romney has never faced a vote on a Supreme Court nominee as a senator.