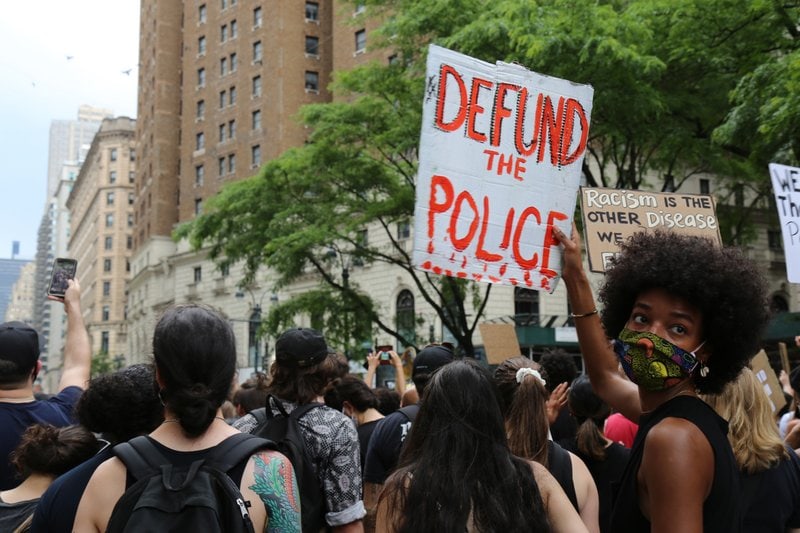 DeSantis has vowed to get tough on protesters.

“Let’s be extremely clear about something — this is a blatant overreach from the Governor and Republicans who are actively undermining the Constitution,” Broward County Rep. Shevrin Jones said about the proposed legislation during a virtual meeting Tuesday afternoon.. “We will not go down without a fight.”

Jones said the country was “built and shaped as a result of peaceful demonstrations and protests.”

DeSantis’ proposal “is a desperate violation of our constitutional rights just ahead of a critical election in which every single vote counts,” Jones added. “This is an active, intentional effort to depress turnout and participation in the democratic process. It’s an insult.”

The proposed bill, titled the “Combatting Violence, Disorder and Looting and Law Enforcement Protection Act,” would stiffen penalties for protesters and slash state funding for subsidiary governments that defund law enforcement. The bill is set to be an early Session priority, already backed by Senate President-Designate Wilton Simpson and House Speaker-Designate Chris Sprowls.

The Democratic leaders criticized the pace DeSantis is moving on the bill. The Governor suggested Tuesday that lawmakers could put the bill on an expedited path to pass by November, despite not calling a Special Session in response to the crises the state has faced since March, Democrats were quick to point out.

Lawmakers are slated to return to the Capitol on Nov. 17 for an organization session where incoming Senate President Wilton Simpson and incoming House Speaker Chris Sprowls, both Republicans, will take over as leaders of their respective chambers. Organization sessions are largely ceremonial and typically last just a day, but DeSantis also could call a special session to take up the protest proposal.

“It’s about priorities,” Rep. Carlos Guillermo-Smith said. “Floridians have died, businesses have shuttered forever, people are about to be evicted from their homes, and the first thing Gov. DeSantis wants to do is criminalize peaceful protestors. It’s outrageous.”

The state leaders also condemned the Governor’s plan as an act of First Amendment suppression, especially among minority communities.

The Democrats called out the lack of action from the Governor in regard to the coronavirus pandemic and the resulting economic crisis. As of Saturday, 13,287 Floridians have died from COVID-19, and the state just surpassed 4 million pandemic-related jobless filings.

“Call this Special Session, and let’s talk about your proposal, but I will tell you that what you will hear are a whole bunch of other things,” Sen. Oscar Braynon said, directly addressing Gov. DeSantis. “The reason why you are seeing cities have to cut their budget is because you have allowed people to die and our economy to go into the gutter because of your response to COVID-19.”

The state lawmakers were joined by political director of New Florida Majority Dwight Bullard and NAACP Miami-Dade Chapter President Ruban Roberts. Bullard likened the proposal to Jim Crow laws, which were rules put in place in the South to target and harm Black residents.

“What you’re doing is you’re putting back into law historical things that we’ve worked very hard to get rid of,” Bullard said. “The idea that we’re standing here, having to have this conversation about these same laws being enacted, or proposed, by the gubernatorial administration, speaks to how problematic and how lacking you are of historical precedence.”

“It’s going to have broad support, certainly from the Republican caucuses, in both chambers. It may be something that you need to act,” DeSantis told reporters following a state Cabinet meeting Tuesday. “Florida has handled it better, but at the same time, you constantly hear these reports of unrest. You hear threats of more unrest. That is not something that we want to deal with, without having all the tools at our disposal.”

Florida hasn’t had violence or looting like in Kenosha, Minneapolis, Portland and other cities named during the Monday news conference with the Governor. But Tallahassee, including outside the Historic Capitol Building, has seen unsanctioned protests that block roadways or lead to violent responses from motorists.

“Today I’m saddened that one of my first addresses as an elected official is about the Governor’s abuse of power in this situation,” newly elected Tampa Bay Rep. Michelle Rayner said. “I’m troubled that our Governor would find it more useful to engage in partisan politics, fear mongering and tout legislation — and legislation, so we are very clear, that is a direct attack on those who have been organizing and protesting for an end to state violence this summer.”