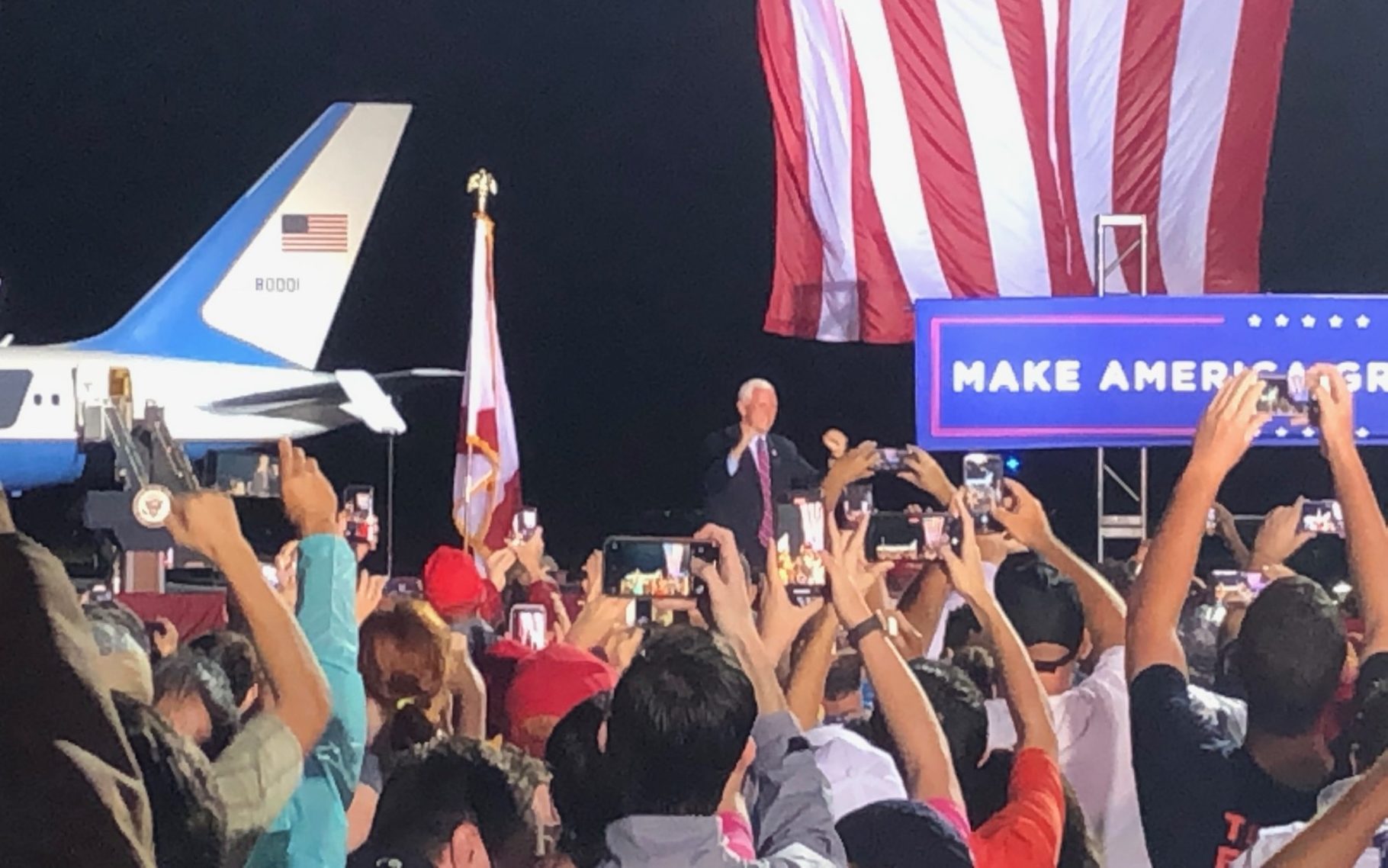 The presidential campaign comes to Tallahassee with 10 days till Election Day.

Vice President Mike Pence touched down in Tallahassee Saturday to offer the capital city a taste of the presidential campaign with 10 days remaining until Election Day.

While President Donald Trump has criss-crossed the state, both his and Democratic presidential nominee Joe Biden‘s campaigns have largely passed over Tallahassee. But speaking to a crowd of more than 500, Pence thanked supporters for weathering the rain for hours before his arrival.

“We need to decide right here and right now that Joe Biden will never be President of the United States,” Pence said. “We’re going to reelect President Donald Trump for four more years.”

The Vice President recalled Thursday’s presidential debate, which he said the President won “hands down.”

“With Joe Biden, you got 47 years of all talk, no action,” Pence said, pulling one of the President’s lines. “Under President Donald Trump, it’s been about 47 months of all action, all results and 47 months of promises made, promises kept.”

And he touted the administration’s care for veterans and how he said they have revitalized the military. American manufacturing, too, had recovered in the President’s first term.

“Under President Donald Trump, we put China on notice,” Pence said. “We imposed tariffs on China to protect American jobs, American workers and American farmers, and we say the era of economic surrender is over.”

In anticipation of Judge Amy Coney Barrett‘s confirmation to the Supreme Court, he touted the President’s three nominations.

“Isn’t she great? Not just ’cause she’s from Indiana,” Pence joked.

He hit California Democratic Sen. Dianne Feinstein for comments about the nominee’s Catholicism and ties to a secretive faith group.

Trump and Pence have repeatedly hit Biden for not answering whether he would pack the Supreme Court if elected.

He lauded the administration for removing the individual mandate from Obamacare.

“We’re going to use the power of freedom and free markets to give Americans low-cost health insurance and America will never be a socialist country,” he added.

Hitting on the President’s law and order messaging, the Vice President said Biden would double down on policies that led to violence in cities.

“When you start to back off in support for those who protect and serve, you only embolden the people who do violence to our families and our communities.”

“Under President Donald Trump, we’re going to back the blue,” Pence added. “We’re not going to defund the police, not now, not ever.”

He thanked fans for their determination to come out “in what is usually the Sunshine State.”

“I can’t wait to tell him how many people came out in the rain just to hear his VP travel around the country,” Pence said.

Ahead of Pence’s arrival, Leon County Republican Party Chairman Evan Power led the Pledge of Allegiance. Prior to doors opening, he tweeted out criticisms over parking restrictions at the venue outside Flightline Group Inc.’s hangar at Tallahassee International Airport.

“I’m disgusted with the City of Tallahassee @CityofTLH taking advantage of @realDonaldTrump supporters seeing the @vp by charging $20 for a lot that is free and empty any other day. I guess that is what happens when @MayorOfTLH endorses the opponent,” he wrote.

Kicking off Pence’s introductions, State Rep. Jason Shoaf, who represents parts of 10 counties across Northwest Florida, stressed the President’s focus on and funding for career and technical trades.

The Representative also warned that the nation could return to the wrong path if Trump and Pence don’t win reelection.

“If we don’t all show up in the next few weeks and fight hard, get our votes in, get your neighbors to vote in, folks, we are at risk of losing all that we have gained and turning into another Venezuela,” he said.

“President Trump has actually brought the most historic peace to Middle East conflicts in my lifetime,” he said. “That’s what happens when you have a President who’s not afraid to take out terrorists that threaten our American military.”

Knowing the crowd, Andrade name-dropped former FSU football coach Bobby Bowden, who this week said he beat COVID-19 because he wanted to vote for Trump.

U.S. Rep. Neal Dunn, who represents part of Tallahassee in Florida’s 2nd Congressional District, said the district would bring a win for the President. He railed against political correctness and those who wish to remove historical monuments.

“This is a proxy war for power over your mind,” Dunn said. “You have to think what they want you to think or you’re wrong.”

The Vice President spoke before a crowd of more than 500 supporters at Tallahassee International Airport.

Pence was initially scheduled to visit Jacksonville Saturday before his Tallahassee stop. But despite that initial confirmation from Pence communications director Katie Miller, the Vice President instead visited Lakeland.

Florida is a must-win state for Trump to secure four more years in the White House. The Real Clear Politics polling average currently gives Biden a 1.5-point advantage in the state while FiveThirtyEight gives him a 70% chance to win and expects a 2.8-point margin.

This weekend has been a busy one for Trump’s Florida campaign operation.

Pence’s trip marks his first to North Florida since July, when he showed up to “thank” people involved in planning the ultimately scuttled Republican National Convention events in Jacksonville.

On Friday, Trump held rallies in The Villages and Pensacola. And Saturday, Trump voted early in West Palm Beach.

“I hear we’re doing very well in Florida and everywhere else,” Trump said after casting his “very secure vote.”

The Biden campaign has made few appearances in Tallahassee. Earlier this month, U.S. Rep. Al Lawson and Agriculture Commissioner Nikki Fried kicked off a Biden “Victory Center” in the capital city.

Vice Presidential candidate Kamala Harris is slated to visit Jacksonville as part of a two-city Florida swing. Harris, however, is visiting Orlando in her second stop rather than Tallahassee.

previousWinner and Loser of the Week in Florida politics — Week of October 20, 2020