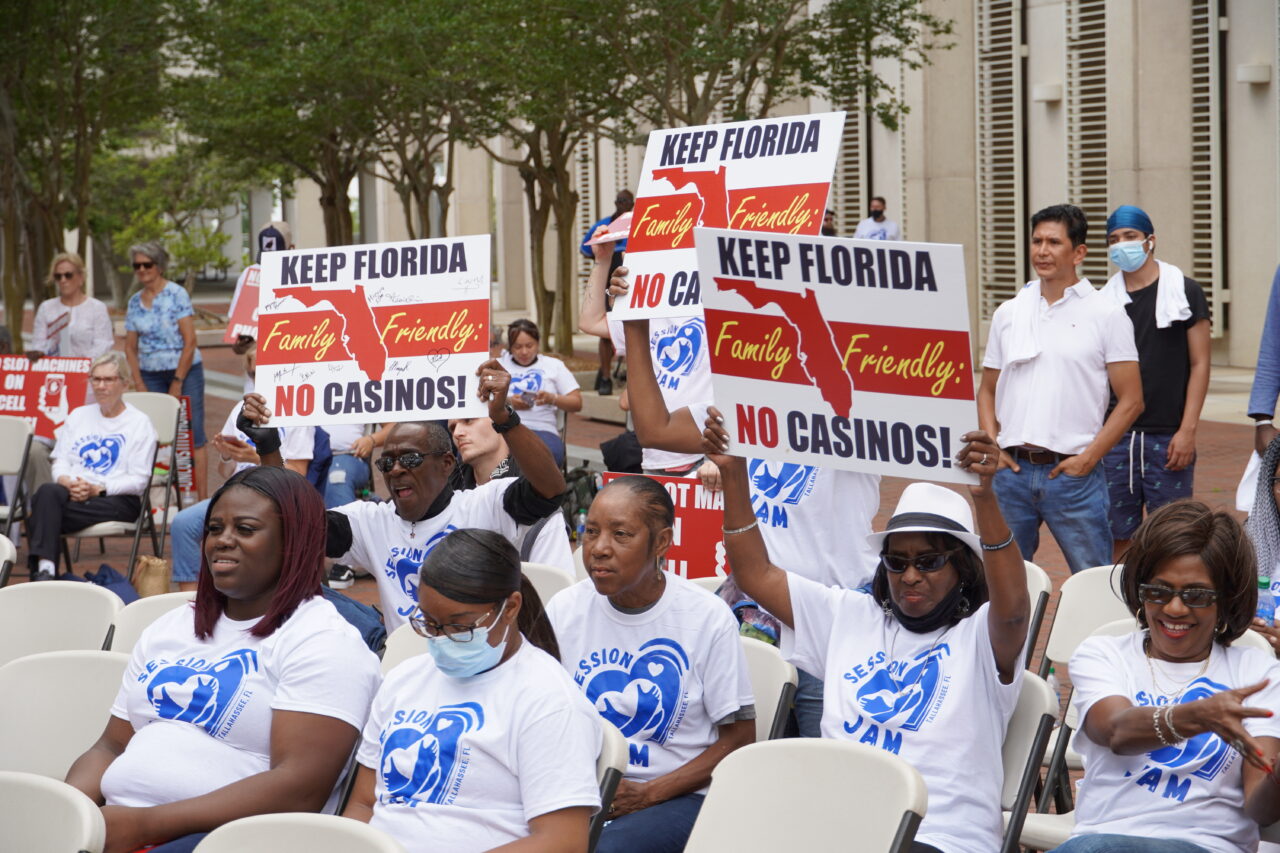 Demonstrators traveled from across the state to voice opposition.

Dozens packed into the Capitol Courtyard Tuesday to make one final stand against the state’s effort to broaden gambling in partnership with the Seminole Tribe.

The demonstration comes as lawmakers iron out a new agreement with the Tribe to construct three new casinos and add several new casino games in the state.

The new 30-year deal, which would mark the largest expansion of gambling in state history, has drawn staunch opposition from religious groups, who argue gambling threatens the economy, erodes culture, and compromises Christian spiritual morality.

Florida Family Action (FFA) President John Stemberger led the rally. The FFA is the “legislative arm” of the Florida Family Policy Council, a socially conservative organization that champions anti-abortion and pro-family positions, according to the group’s bio.

“It makes no sense whatsoever,” Stemberger said “We do not want to be the destination casino state. We want to be what we are right now, the beautiful family-friendly theme park state. People come here to enjoy nature and enjoy families.”

Attendees, many of whom bussed to Tallahassee from across the state, waived signs and cheered as roughly eight speakers, including Tampa Republican Rep. Mike Beltran and No Casinos President John Sowinski, decried the expansion.

Sowinski’s appearance marked the No Casinos group’s latest effort to jab at the expansion. In early May, the group launched a statewide ad campaign against the Seminole Compact.

Speaking Tuesday, Sowinski argued the expansion violates the Florida Constitution, citing an 2018 amendment that gives Floridians “the exclusive right to decide whether to authorize casino gambling in the State of Florida,” the amendment reads.

“What this Compact does is in violation not just of our state’s constitution, but most importantly, of the sacred trust that elected officials have to uphold the constitution that we enact,” Sowinski said. “We need to be against that.”

The Seminole Tribe of Florida was a major financier of the anti-gambling expansion amendment, but  Jim Allen, CEO of Seminole Gaming and chairman of Hard Rock International, says the Tribe’s interprets it differently.

“From our standpoint, we certainly think we understood what the intentions were of Amendment 3, but, candidly, we could be wrong,” he said.

Notably, Florida stands to win big under the Compact.

Under the deal struck by Gov. Ron DeSantis and the Tribe, the Tribe would pay at least $2.5 billion in the first five years of a 30-year agreement, which could net the state “in excess of $20 billion” over the next three decades, Allen told lawmakers Monday.

Still, Beltran said Tuesday, expanded gambling would lead to a slew of community issues including an increase in crime. Beltran, a lawyer, vowed to vote against the Compact.

“We’ve had a lot of problems,” Beltran said of gaming. “Gambling is addictive.”

“Many of us have more objections here and many of us have objections because of the social cost,” Stemberger said. “There’s also an economic cost. The casinos have the effect of cannibalizing local restaurants, hotels and entertainment industries because the cash flows to the big casinos and not to those groups.”

Despite the demonstration and sizable opposition, lawmakers appear poised to pass the Compact.

Lawmakers are expected to conclude the Special Session as early as Wednesday.

nextLast Call for 5.19.21 — A prime-time read of what’s going down in Florida politics