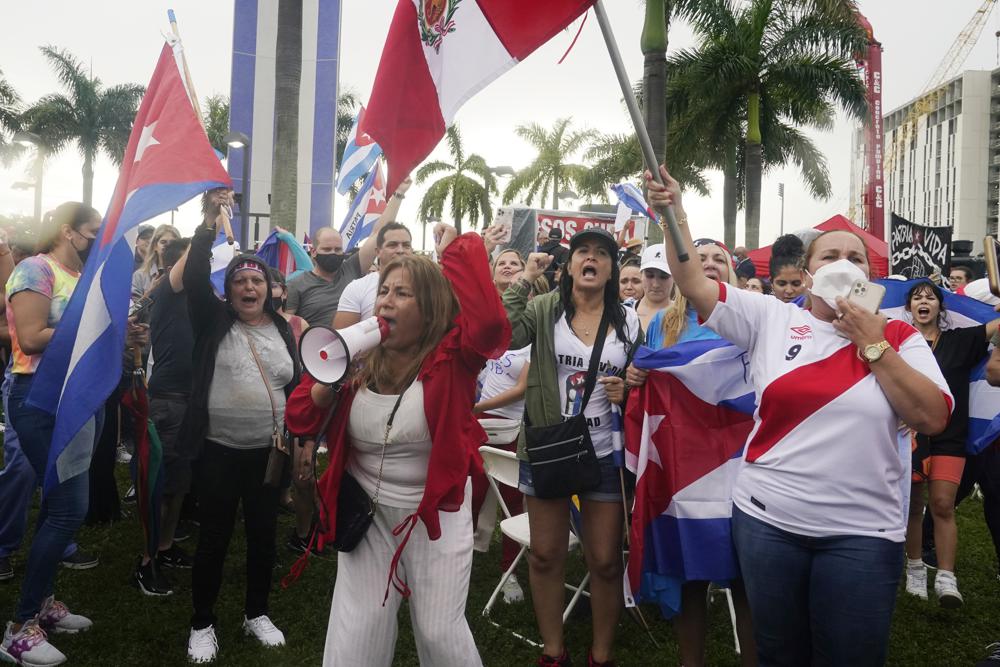 Many allege a so-called anti-riot isn't being applied based on politics.

Some Black Lives Matters activists say a double standard is being used as people blocked busy roadways in Florida this week in support of antigovernment demonstrations in Cuba, with limited action taken by law enforcement despite a new law enhancing penalties against disruptions by protesters.

Gov. Ron DeSantis signed into Florida law a measure earlier this year that boosts penalties against demonstrators who turn violent and creates new criminal penalties for those who organize demonstrations that get out of hand. Provisions of the law also make it a felony to block some roadways and give immunity to people who drive through protesters blocking a road.

The bill was introduced after last summer’s protests for racial justice during which some Black Lives Matter protesters were met by police with tear gas and arrests when they took to the streets for days at a time.

Demonstrators on Tuesday in Miami, Tampa and Orlando temporarily blocked busy roads, chanting support for the Cubans who had taken to the streets in the communist nation Sunday to air grievances about poor economic conditions and other issues.

“When they protest for regime change, which aligns with the governor’s political viewpoint … you see no enforcement from law enforcement,” said Michael Sampson, who co-founded the Jacksonville Community Action Committee, one of many groups that sprung up under the banner of the Black Lives Matter movement.

“I think it’s just downright hypocrisy we’re seeing from the governor, and even law enforcement in how they’re applying this law. It goes to show how our fears that we had earlier … that it will be used against Black people fighting for equal rights,” he added.

On Wednesday, the ACLU of Florida filed a motion in federal court in Tallahassee to block the law immediately, asserting that it could criminalize peaceful protests and shield people who injure protesters in roadways from civil penalties, as well as cast a chilling effect on peaceable protests.

The ACLU had filed a lawsuit on behalf of several Black-led organizations in May seeking to overturn the new law on grounds it violates the First Amendment and targets certain racial justice advocacy groups.

During a visit to Miami on Tuesday, DeSantis said the demonstrations in South Florida were “fundamentally different than what we saw last summer.”

“Therefore, they are FURIOUS that the Governor of Florida didn’t personally drive 500 miles down the state to arrest people for protesting (not rioting) against the communist regime in Cuba,” she tweeted.

In an email to The Associated Press, Pushaw said the Governor had signed the law to empower law enforcement to protect and serve the people of Florida.

“The legislation protects First Amendment freedoms, while ensuring that law enforcement professionals are empowered to use their discretion to maintain public safety,” Pushaw said. “The Governor has always urged all Floridians exercising their right to protest, to make their voices heard peacefully and lawfully.”

Pushaw pointed out that blocking roadways without a permit was illegal long before the new law, and law enforcement agencies around the state have discretion to enforce the law in a way to ensure public safety.

Waving Cuban flags, hundreds of protesters on Wednesday demonstrated at a busy intersection outside one of Miami’s most famous Cuban restaurants, Versailles. Miami spokesman John Heffernan confirmed that the city approved a permit to close down five blocks along Calle Ocho in the Little Havana neighborhood Wednesday. Many of the protesters dispersed, though, when it started raining at the start of the demonstration.

___
Republished with permission of The Associated Press.
Post Views: 2,956