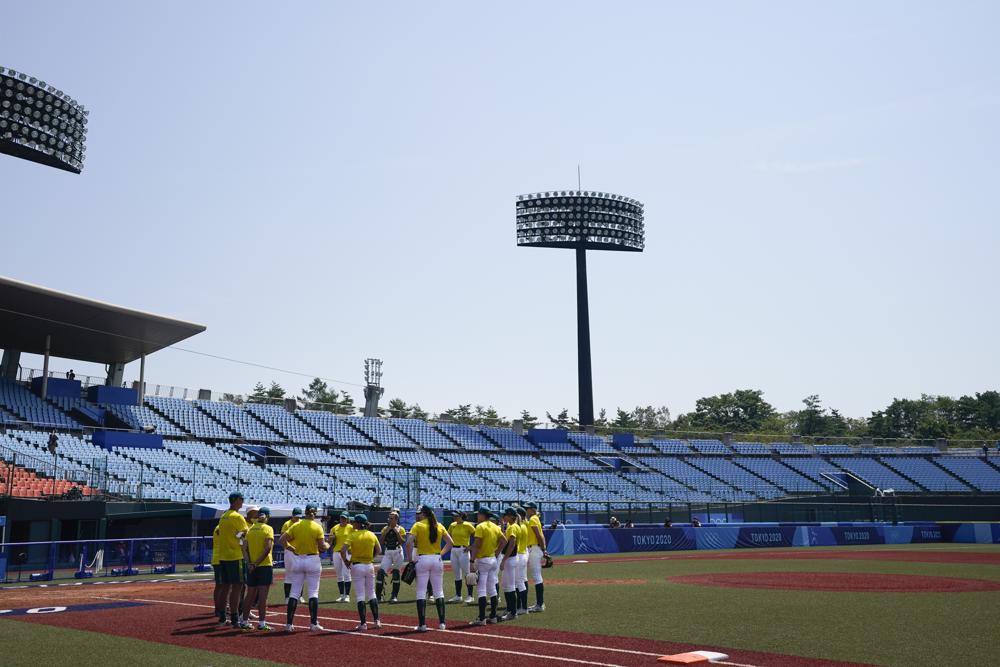 The International Olympic Committee is pushing ahead.

Skippy the yellow kangaroo with green paws was affixed to the first base dugout railing, watching the Australia Spirit become the first team to work out at Fukushima Azuma Baseball Stadium, seven weeks after they became first foreign athletes to arrive at the Olympics.

Coach Laing Harrow hit grounders and flies to his women starting at 9 a.m. Tuesday, exactly 24 hours before the eighth-ranked Aussies step to the plate when host Japan, the No. 2-ranked softball team, throws the very first pitch of the very first event of the pandemic-delayed Olympics.

The Games of the 32nd Olympiad were to have started last July 22 but were pushed back by the coronavirus pandemic. Despite many in Japan questioning whether it is wise with the virus still raging in the country, the International Olympic Committee is pushing ahead.

This ballpark, located about 150 miles north of Tokyo and similar to a big league spring training camp, has only several handfuls of the 11,000 athletes who are converging on the Tokyo Games. The stadium, 42 miles northwest of the location of the 2011 Fukushima Daiichi nuclear disaster, will host the first two days of the softball tournament and the opening day of the baseball event on July 28, with the remainder at the home of the Central League’s Yokohama DeNA BayStars, a big ballpark 17 miles from the capital.

In their bright yellow jerseys, the Aussies were excited to be about to get underway.

“It was disappointing for the girls, obviously, being postponed for a year,” Harrow said. “Some of them would have had plans from after August 2020. And, sure, it wasn’t in their plans to continue to be in the gym every day and training every day. But overall, the girls have really handled that well. And I think one thing we’re very good at is being adaptable.”

The top-ranked United States, seeking to regain the gold medal it lost when it was upset by Japan 3-1 in the 2008 final in Beijing, opens against No. 9 Italy in the second game of a tripleheader that ends with No. 5 Mexico against third-ranked Canada.

Host Japan took batting practice next on a broiling day with 95-degree heat and high humidity, followed by Italy, the United States, Mexico and Canada.

Outfielder Janie Reed is the wife of Los Angeles Dodgers right-hander Jake Reed, who made his big league debut July 6, had six appearances and was optioned Monday to Triple-A Oklahoma City.

“The aspect of having 16 months, 17 months now since the decision to delay the Olympics has probably caused some environmental things to happen,” U.S. coach Ken Eriksen said. “Number one, the natural order of aging another year for some of the players as far as either enhanced, or maybe it has brought in some consternation, especially emotionally.”

The American team trained in the U.S. through June 20 and started in Japan on July 5 in Iwakuni, 525 miles southwest of Tokyo.

“We relied on what many people did, just Zoom calls and just virtual communication and trying to stay connected, but fortunately this time gave way to a lot more individual preparation and a lot of learning and a lot of people pursuing knowledge and just continuing to perfect their craft,” said Canada outfielder Victoria Hayward, who trains at Proswings in Longwood, to take advantage of better weather. “So we feel very fortunate that we had a little bit of extra time to sharpen our axes and to work together and then in 2021 we’ve been able to be together for a majority of the year unbroken.”

previousJoe Henderson: Wanna get away? Jeff Bezos has the cash to do that (and you don't)