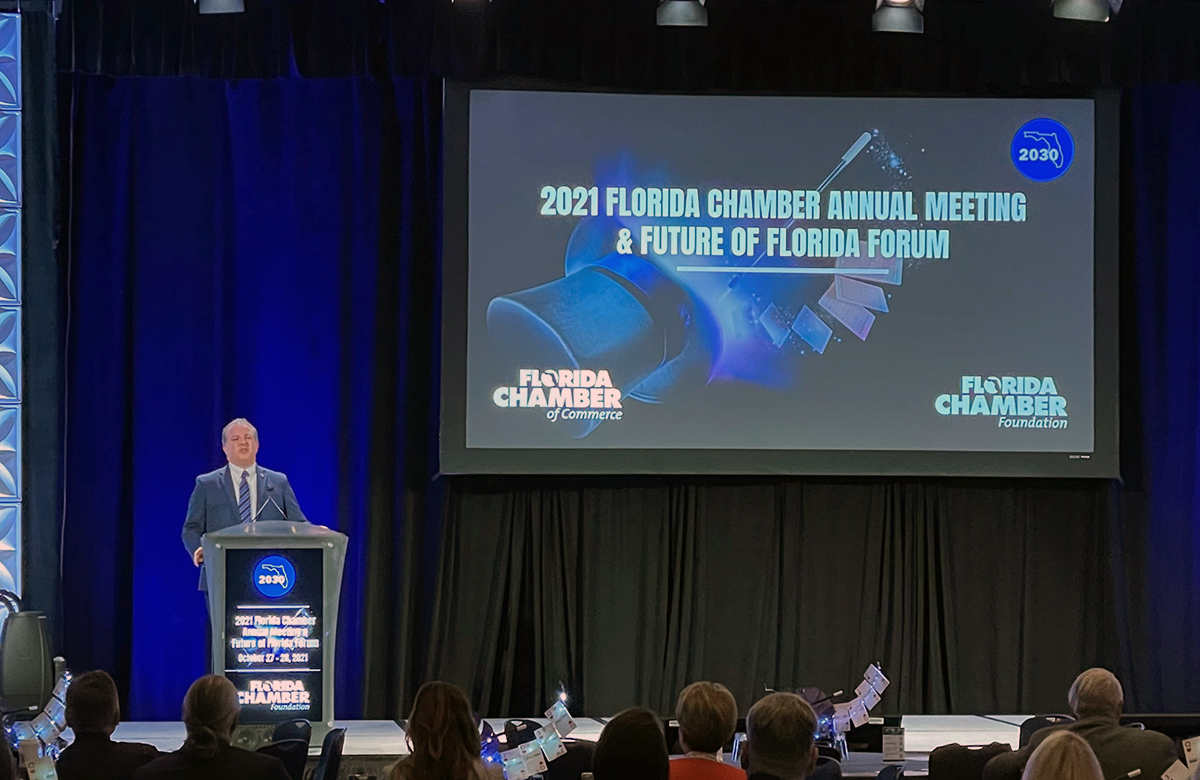 Patronis says it's 'important that we get the economy up and running in as many ways as possible.'

CFO Jimmy Patronis said his office will focus on funding for first responders and cracking down on pesky scam calls during the upcoming Legislative Session.

Patronis’ comments came during a speech to business leaders gathered at the Florida Chamber of Commerce’s Future of Florida Forum.

The Panama City Republican opened by recounting the fight to secure COVID-19 liability protections for businesses last Session. He was among the first politicians to push for the policy, launching a statewide “Rally at the Restaurant” tour to build popular support.

“I’m so very proud to say that this was the very first piece of legislation that Gov. DeSantis signed last year,” he said, crediting the Chamber with helping push it through the Legislature.

Heading into the 2022 Legislative Session, Patronis said it was “important that we get the economy up and running in as many ways as possible.”

Patronis, who is up for reelection next year, said the Florida economy is already headed in the right direction compared to other parts of the country — he recently visited Chicago and Washington and said the situation in both cities was “sad.”

The CFO then pivoted to his office’s goals for 2022.

“In this Session, one of our top priorities is to make sure (first responders) have the support they need to do their job in order to protect our communities,” he said.

Specifically, his office will seek a $10 million appropriation to purchase equipment and provide more training to urban search and rescue teams, which he said were vital to the response effort after the Surfside collapse.

Patronis declared 2022 “Year of the US&R” in honor of the eight US&R Task Forces throughout the state. Over the years, the teams have mobilized to various emergencies and disasters including 9/11 and the Oklahoma City bombing.

“Over 400 urban search and rescue team members worked 12-hour shifts — midnight to 12, 12 to midnight — 29 days straight on that pile of hell,” he said of Surfside. “Their boots blew out, their gloves blew out, their knees gave way, their backs gave way. It was a different type of battlefield.”

On a brighter note, Patronis highlighted the work his office has done to spread the word about the state’s unclaimed property website. Since he took office, the state has returned more than $1.4 billion to Florida residents, including $28 million last month.

He hopes to put more money in Floridians’ pockets by pushing a bill in the upcoming Session that would end “negative option billing” — a term for recurring bills, usually for digital subscriptions, that users must jump through hoops to cancel. Patronis’ proposal would require companies to make memberships “just as easy to cancel as it was to sign up.”

Patronis also took aim at the surge in robocalls soliciting Floridians to buy extended car warranties or other inferior or bogus products. The Department of Financial Services, he said, will ask the Legislature for more authority to crack down on those calls by requiring the callers to provide their credentials so customers can double-check that they are legitimate.