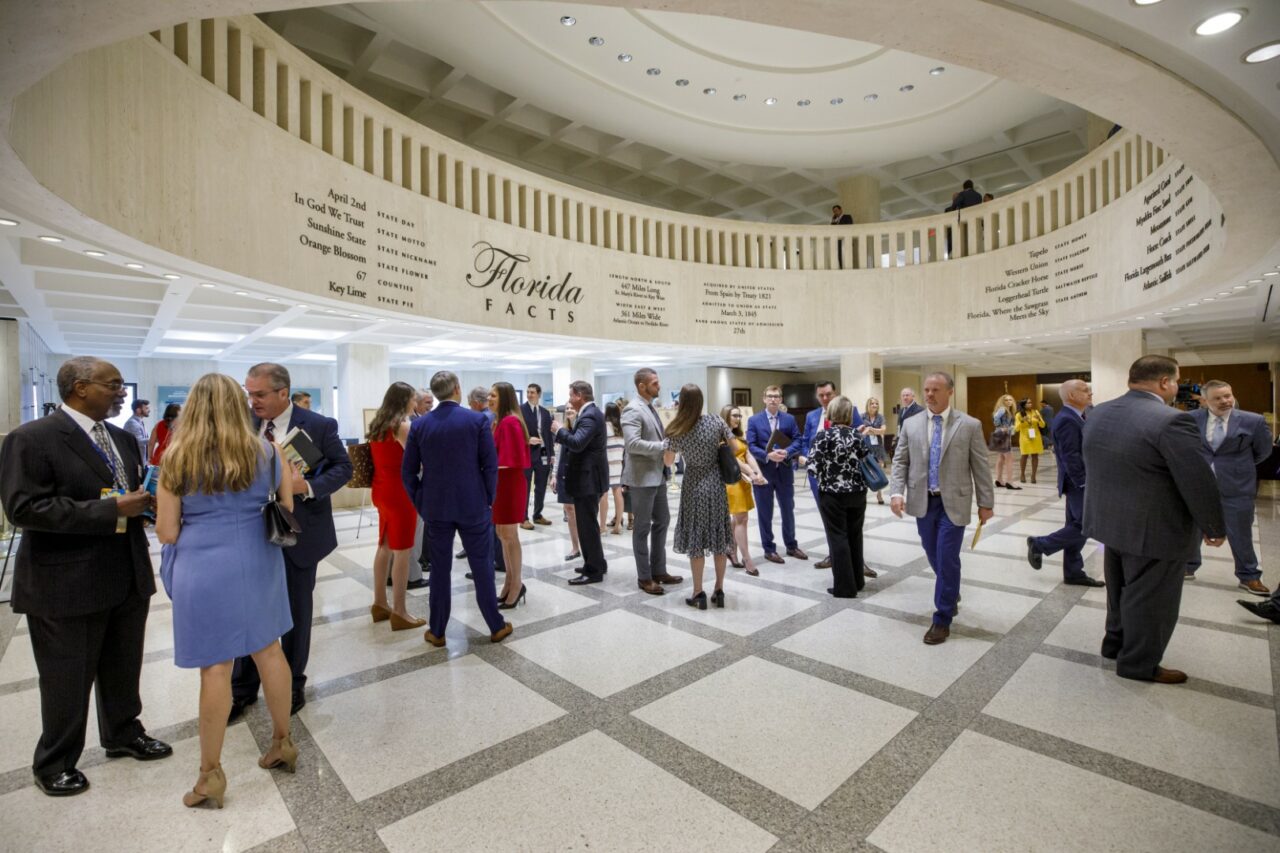 Your quarterly rundown of the best of the rest.

The state’s biggest lobbying firms may be scooping up $2 million-plus every quarter, but there’s still plenty of work to go around for the rest of the lobby corps.

In fact, many of the firms lingering just outside the Top 5 are putting up numbers that could go toe-to-toe with the bluebloods if team size is considered.

Here’s a rundown of how some of the rest of the firms in the Top 15 fared in the third quarter.

But first, a primer.

Florida Politics estimates how much firms earn based on the middle number of the per-client ranges they list on their compensation reports. Contracts are reported in $10,000 increments. Compensation reports also include firm-level ranges, which can give outsiders a rough idea of a firm’s minimum and maximum earnings.

The GT Law team represented 140 clients in all. The 101 listed on the firm’s legislative compensation report paid a combined $1.2 million.

At the top of that report were four clients that paid $45,000 over the three-month span: Baptist Health South Florida, the Florida Association of Court Clerks & Comptrollers, Heritage Property & Casualty Insurance Company and Humana Medical Plan.

They were followed by a half-dozen at $35,000 contracts and an additional six in the $25,000 bracket. The report included many well-known brands, including AT&T, Florida Power & Light and Ford Motor Company.

Median earnings in the executive branch totaled $715,000. The top half of that report included many of the cornerstone clients from the legislative branch report.

The top-paying ones were Heritage Property & Casualty and Oscar Insurance Company of Florida, both of which paid between $40,000 and $50,000 for the quarter. Banzai Capital Partners and McKinsey & Company were one rung down, chipping in $35,000 apiece.

The firm’s top executive branch client was Nomi Health, which broke the cap on range reporting with a $63,000 check. HCA Healthcare also surpassed the top range, chipping in $53,000 for executive branch lobbying.

HCA, which operates hospitals and freestanding emergency rooms throughout the state, showed up at the same level on Rubin Turnbull’s legislative report, making it the top client overall last quarter.

The firm’s executive report also featured three clients at the $35,000 level: Datalink, Florida Crystals and The Richman Group of Florida.

Florida Crystals and The Richman Group also showed up with $35,000 on the firm’s legislative report.  They were followed by seven contracts in the $25,000 range and more than two dozen in the $15,000 range.

Rubin Turnbull & Associates reported overall earnings between $500,000 and $1 million on both of its reports, meaning it earned no less than $1 million last quarter. It  may have earned as much as $2 million.

No. 8: The Advocacy Group at Cardenas Partners

Al Cardenas and the team at The Advocacy Group represented 105 clients in the first quarter, earning an estimated $1.57 million in pay.

With a new Seminole Compact and the prospect of multiple gaming amendments on the 2022 ballot, many lobbying firms received big checks from gaming interests last year. TAG was no exception.

Its top legislative client for the quarter was Dania Entertainment Center, a gaming company based in Dania Beach. The South Florida operation paid TAG $45,000 for work in the Legislature and another $15,000 for executive branch lobbying.

Following Dania Entertainment were Gigly, Rising Phoenix Holding Company and BENEFYTT TECHNOLOGIES, each of which paid between $30,000 and $40,000 for legislative lobbying services in Q4.

In all, TAG reported $765,000 in legislative lobbying earnings and logged another $805,000 lobbying the executive branch. Both reports also listed overall compensation between $500,000 and $1 million, indicating the firm earned no less than $1 million last quarter. At the top end, TAG could have earned $2 million.

Michael Corcoran and the team at Corcoran Partners netted an estimated $1.54 million last quarter, with $1 million of it showing up on the firm’s legislative compensation report.

Corcoran and lobbyists Jacqueline Corcoran, Matt Blair, Will Rodriguez and Andrea Tovar handled the needs of 93 clients in the Legislature, including three that paid between $30,000 and $40,000 during the reporting period.

One of the clients in that bracket was The Big Easy Casino, a former greyhound track that also offers slots and a suite of parimutuel games. The other $35,000 clients were the Florida Optometric Association and wireless juggernaut Verizon.

However, the firm’s No. 1 legislative client was Fontainebleau Development, which paid $68,000 for legislative lobbying work. The real estate development company paid the same amount for executive branch lobbying, making it the firm’s most lucrative contract by a wide margin.

The executive report client sheet mirrored the legislative one, though most clients showed up in a lower pay range.

The team at Metz Husband & Daughton rounded out the Top 10 with an estimated $1.48 million in Q4 pay.

The firm fared best in the Legislature, where it earned an estimated $986,000 during the reporting period. MHD’s legislative compensation report was topped by Amscot Financial, which broke through the range reporting cap with $51,000 paid last quarter.

Further down were a dozen clients that paid $25,000 each. The set included some well-known companies, such as Enterprise, General Motors, Progressive, Siemens, UPS and Walt Disney Parks and Resorts.

MHD also tallied $495,000 in the executive branch. Ecosystem Investment Partners was the top client on that side of the fence, paying an estimated $35,000 last quarter. The Everglades Foundation showed up in the $25,000 bracket and was followed by seven $15,000 contracts.

Smith Bryan & Myers pulled down an estimated $1.37 million in advocacy revenues during the third quarter, topping their Q3 haul.

While the topline figure puts the firm just outside of the Top 10, overall earnings ranges listed on SBM’s reports show it had a higher earnings floor than most firms in its weight class.

In both the executive and legislative branches, SBM reported earnings between $500,000 and $1 million, meaning it certainly crossed the seven-figure mark and may have earned as much as $2 million.

The legislative branch report was led off by JMI Family Enterprises, which paid the firm an estimated $35,000 in Q4. It was followed by $25,000 contracts with the Family Law Section of The Florida Bar, the Florida Thoroughbred Breeders’ and Owners’ Association and the Hillsborough County Board of County Commissioners.

Another 29 clients showed up at the $15,000 level while nearly four dozen others chipped in an estimated $5,000 apiece.

At the top of Smith Bryan & Myers’ executive branch report was a $25,000 contract with DJI Technology. Another 17 clients showed up with $15,000 checks while the bulk of those on the report paid the firm $5,000 last quarter.

Named partners Jon Johnson and Travis Blanton led the firm to an estimated $1.22 million in revenues during the final three months of the year.

Team J&B has built a reputation as one of the best health care lobbying firms in the state and its reports reflect that. Some of their top legislative clients were Advent Health and the Florida Hospital Association, both of which showed up at the $35,000 level.

Johnson & Blanton also represents major non-health care interests such as Samsung Electronics Company, which ranks as one of the Top 15 largest companies in the world. Their most lucrative legislative contract last quarter wasn’t a white-coat company, either — Multitype Library Cooperatives held the designation with $45,000 paid in Q4.

Team J&B’s executive branch compensation report featured 82 clients, all of which also appeared on the firm’s legislative report. Their top contracts on that side of the Capitol Complex were with Advent Health and the Florida Hospital Association, both of which paid $25,000.

Floridian Partners’ legislative report included $35,000 contracts with Florida Internet & Television and the Seminole Tribe of Florida. The latter certainly got their money’s worth in Q4.

Though the Tribe went on a lobbyist hiring spree during the Special Session to approve the new Gaming Compact, they’ve had the Floridian Partners team on retainer since the mid-2010s and counted on them to come through both during the Compact negotiations and the still-going saga that followed.

Another seven contracts showed up in the $25,000 range, including lobbying deals with Florida Gulf Coast University, Petland and Total Wine, while the majority of their legislative earnings came from the 27 clients in the $15,000-per-quarter bracket.

Floridian Partners’ executive report lists 71 contracts, with Centene Corporation and MAXIMUS splitting the No. 1 spot by paying $35,000 apiece. Docusign, Milliman and the National Council on Compensation Insurance followed at the $25,000 level.

Overall, Floridian Partners reported earning at least $500,000 for legislative lobbying and at least $250,000 for executive lobbying. While the firm’s earnings floor is $750,000, top end estimates show the seven-member team may have earned as much as $1.5 million.

Based on median earnings, the lobbying team led by firm president Will McKinley landed $720,000 in pay. However, the firm’s legislative and executive reports each list minimum earnings of $500,000, meaning the firm earned nearly half-again more.

On the legislative side, Seminole Hard Rock Digital — the ill-fated mobile sports betting operation launched by the Seminole Tribe — led the way with a $25,000 check.

On the executive side, the firm’s most lucrative contract was with LexisNexis Risk Solutions, which paid $25,000 during the three-month reporting period. Eleven clients followed at the $15,000 level while nearly three dozen paid between $1 and $10,000.

Again, many of those contracts would have needed to be near the top end as it reported at least $500,000 in executive branch earnings.

Al Balido, Frank Bernardino, Natalie Fausel and Edgar Fernandez represented 50 clients last quarter, netting an estimated $500,000 in the Legislature and another $225,000 in the executive branch.

The firm’s legislative compensation report was top-loaded with four clients showing up in the $30,000 to $40,000 pay range. They included Advanced Diagnostic Group, the Polk County Board of County Commissioners, Premier Manufacturing Products and professional services firm WSP.

A further 15 clients paid an estimated $15,000 each, followed by 10 at the $5,000 level. They included the governments for Broward County, Flagler Beach, the Monroe County Commission, Palm Beach County, Cutler Bay and St. Augustine.

Advanced Diagnostic Group was the top client on Anfield’s executive branch report as well, repeating at the $35,000 level. The executive report also featured five contracts in the $10,000 to $20,000 range and another 26 contracts worth between $1 and $10,000.