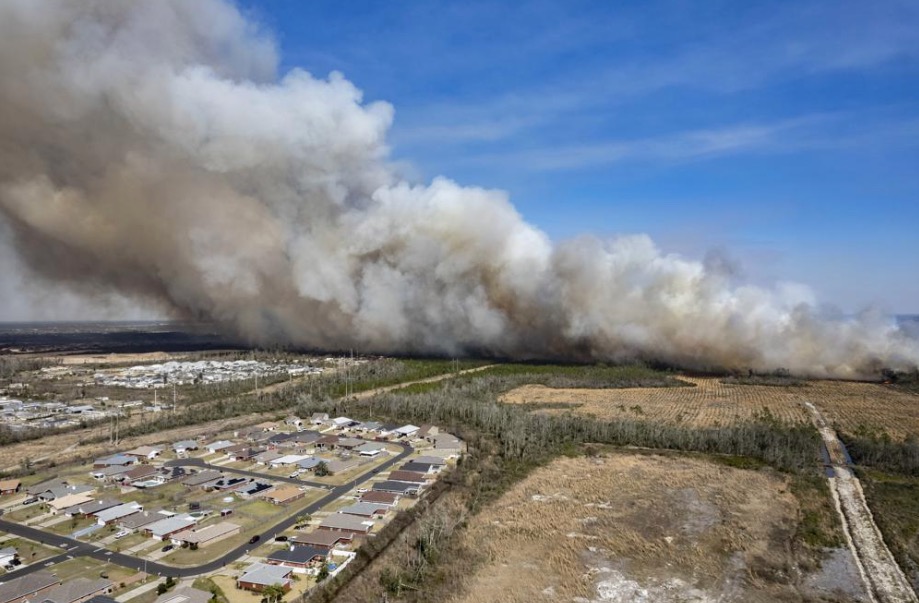 Multiple fires blazing across Bay, Gulf and Calhoun counties in the Panhandle remain largely out of control Sunday afternoon, yet local and state efforts combined with the Florida National Guard are making a difference, Gov. Ron DeSantis said.

Dry and windy weather are pushing the fires that began last week — and responses to them — to the limit. One blaze dubbed the Bertha Swamp fire now covers more than 9,000 acres, while one called the Adkins Avenue fire has topped 1,400 acres.

Those and others have led to numerous evacuations, the destruction of at least three homes, some first responders injuries, and threats to a nursing home and the Bay County Jail complex.

Local law enforcement, firefighters and emergency management crews have been joined by engine brush strike teams from the Florida peninsula, as far away as Jacksonville and Naples. The National Guard is flying two Black Hawk helicopters and two Chinook helicopters, which have dropped hundreds of thousands of gallons of water.

“We are working really with all hands on deck to be able to mitigate this,” DeSantis said. “It is really, really significant. Multiple fires. A major fire there, that we were able to see.”

There have been some injuries to first responders, though the officials did not offer any specifics.

At least three homes have been destroyed, though many others have been saved by what officials said was major efforts.

“I can tell you looking from above shows you even starker contrast between areas that have the support and what would have happened if they didn’t,” the Governor said. “I know there were unfortunately some houses that have been lost. And there were all these other houses that were right there that were saved.”

Chief Financial Officer Jimmy Patronis, who is from Panama City, said 80-member strike teams are coming in from areas throughout the peninsula, most notably from Citrus and Hernando counties. Teams closer by in the Panhandle, such as from Pensacola and Tallahassee, have to remain where they are because fire conditions there are similarly dangerous, Patronis said.

“It’s better to bring those that are out of harm’s way,” Patronis said.

previousFlorida insurance costs set to rise due to failed insurers