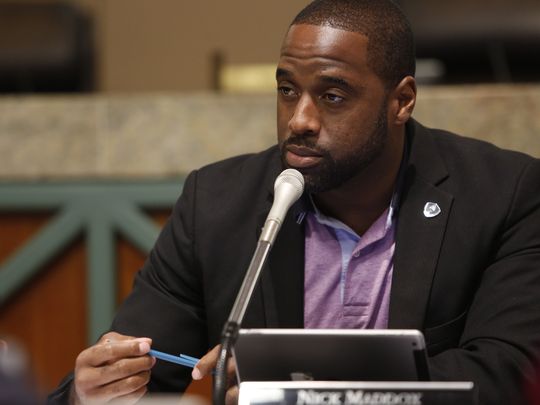 'This text from Herrle was racist on its face and Commissioner Dozier’s lack of a response at that time was telling and hurtful.'

The operative, OurTallahassee writer and former city lobbyist Max Herrle, sent a text to County Commissioner and Tallahassee Mayoral Candidate Kristin Dozier calling Maddox a “dumb little bastard” for his support of the stadium funding. The text messages were uncovered in a public records request by the Tallahassee Democrat.

Maddox wrote that the text from Herrle was racist and criticized Dozier for not calling him out.

“Let me not mince words: This text from Herrle was racist on its face and Commissioner Dozier’s lack of a response at that time was telling and hurtful,” Maddox wrote.

He also said it is indicative of a troubling shift of politics in Tallahassee, ushered in by a push for progressive politics by white elected officials, likely a reference to City Commissioners Jeremy Matlow. and Jack Porter.

“This bigger picture is becoming harder and more potentially dangerous for our community to ignore,” Maddox wrote. “It’s a shift from a responsible and collegial North Florida brand of democratic politics to a more extreme liberal progressive agenda ushered in by mostly younger (millennial), white elected officials, and their supporters.”

Herrle, who’s partisan news outlet regularly aligns with Dozier, Matlow, Porter and County Commissioners Bill Proctor and Brian Welch also sent messages to some Commissioners asking them to stay till the end of the Blueprint meeting, where Porter made a motion to reevaluate the structure of the Blueprint program.

Maddox attacked those messages, as well as made criticism at Herrle’s website.

“This text demonstrates Herrle’s role orchestrating their now go-to tactic of attacking the legal, technical, and even personal credibility of professional staff when staff and Commissioners do not submit to their persistent tantrums,” Maddox wrote. “We have seen these troubling tactics play out in everything from the censuring of elected officials to the creation of political hit sites trying to pass as news media.”

In a statement to Florida Politics, Herrle defended the opposition to the stadium funding, but said his comment about Maddox was wrong.

“People all across the community have been extremely frustrated with the handling of the Boosters deal, and it was not easy watching our elected officials give away $27 million dollars for luxury skybox seating during an eight hour meeting,” Herrle said. “I shouldn’t have said that about Nick regardless of his position on the Boosters deal, which is why I called and texted him after the story to apologize and he never responded.”

Maddox also pointed out how Dozier, Matlow, Welch, Porter and County Commissioner Rick Minor voted against the bonding of nine other Blueprint projects worth over $100 million when they voted against the stadium bonding. Dozier attempted to separate the bonding of those projects to approve them without approving the stadium funding, but her attempt was blocked by County Commissioner Jimbo Jackson.

Maddox also criticized the “new brand of progressives” for wanting to tell Black elected officials how to vote.

“This new brand of progressives who want to occupy and take over City Hall are proud to be educated on racial injustice but want to tell Black elected officials how to vote or explain to us the impact of our votes on the people we represent,” Maddox wrote. “If you survive the internalized racism and self-destruction of Black adolescents you learn some important survival skills. An important one is not to challenge the way some people think, especially those radical progressives who consider themselves to be heroes to Black people.”

previousNo. 8 on the list of Tampa Bay's Most Powerful Politicians: Bob Gualtieri