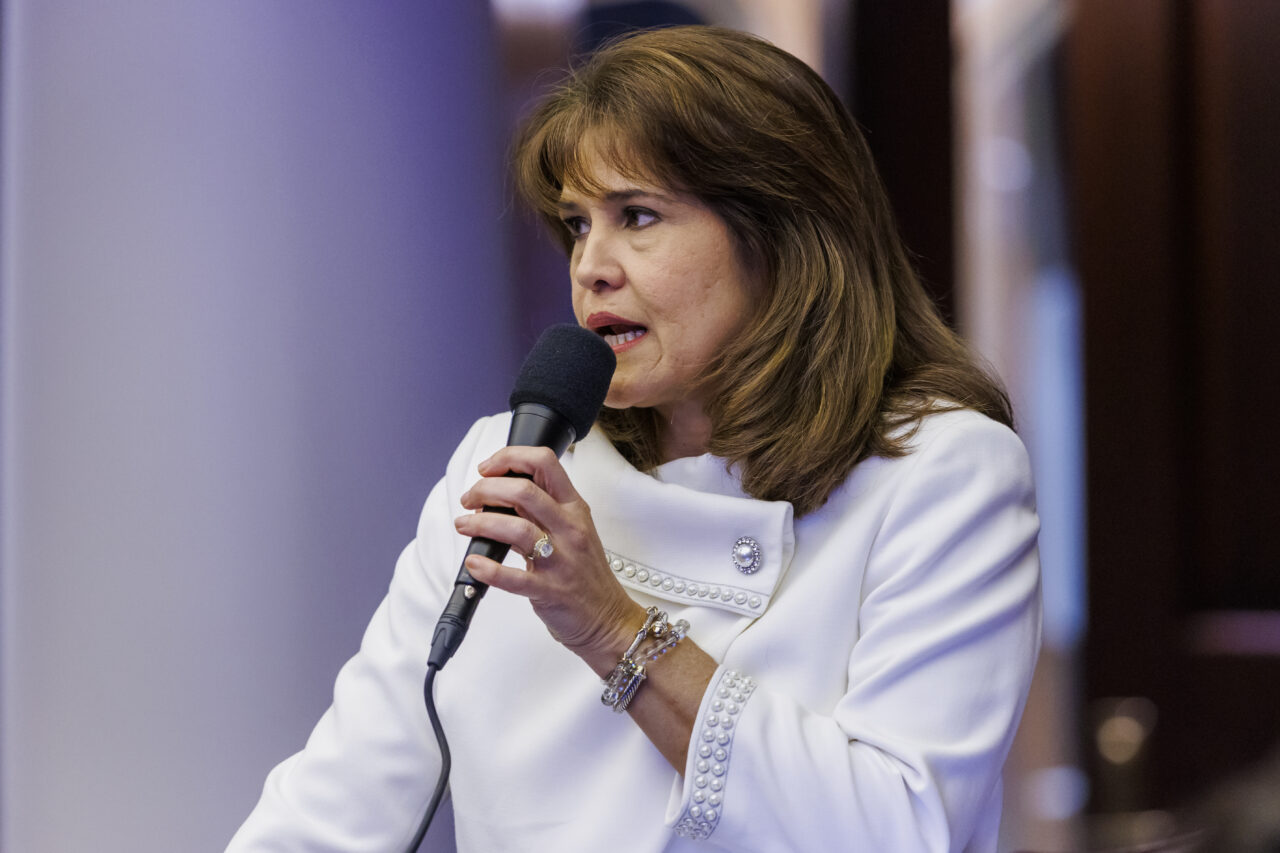 'There is clearly a weakness on this issue for my opponents in the Primary, and we cannot have any weaknesses.'

Sen. Annette Taddeo said she was “shocked” by a newly leaked Supreme Court draft opinion indicating that the future of women’s reproductive rights is at its most tenuous point since the ratification of Roe v. Wade almost 50 years ago.

She was “terrified,” she said for millions of women across the country and particularly women of color, who disproportionately have fewer options when it comes to seeking out-of-state care. It was “painful” to know that her daughter could soon face the same hardships her grandparents endured and hoped to never confront again.

On Tuesday in Miami, flanked by two former elected officials and a fellow current state lawmaker facing an outspokenly anti-abortion opponent, Taddeo appeared hyper-focused by the outrage she expressed.

She singled out U.S. Sens. Krysten Sinema and Joe Manchin, who have repeatedly obstructed their fellow Democrats in Washington. The time for pleasantness is over, she said. It’s time for something new.

“We can’t simply say that it’s OK to continue playing by the same rule, that it’s just business, that these Democrats or those Democrats are supporting Republicans — ‘It’s OK; they’re my friends.’ Well, it’s not OK,” she said. “Today, we’re finding out why it’s not, why we can’t play nice anymore. We can’t elect people who are going to be weak on the history of their record defending women’s rights, defending the rights of Black and Brown communities.”

Tadddeo, who is running for Governor this year, then turned her attention to two of her most prominent Democratic Primary opponents, U.S. Rep. Charlie Crist and Agriculture Commissioner Nikki Fried, both of whom have consistently outraised and outpolled her in the race.

Crist, who served as Florida’s 44th Governor from 2007 to 2011, is a former Republican with an inconsistent record on abortion. While he now asserts himself to be a staunch defender of women’s reproductive rights and recently called for Congress to codify Roe v. Wade into law before the Supreme Court renders an official decision, he’s called himself “pro-life” in robocalls for prior campaigns and in interviews for the 2022 campaign.

“We have a big fight ahead of us,” Taddeo said. “I have nothing against my opponent in the Primary. Charlie is a very nice guy, but we need to make sure that we elect people who have a clean … record that is very clear as to where they stand on this, because this is what we’re fighting for.

“You’ll never find a picture of me wearing a Republican Senator’s shirt, knocking on (doors for them) or making phone calls (for) those same Senators … or Representatives that are now going to vote to take away a woman’s rights here in Florida.”

But it’s not just women whose freedoms are at risk, she continued. The legal principles established in 1973 with Roe v. Wade that are the foundation for abortion rights are the same ones used to safeguard other rights not explicitly enumerated in the Constitution, including same-sex marriage and contraception.

Unless something changes, those are on the proverbial chopping block next, Taddeo said.

“That’s the ultimate goal,” she told Florida Politics. “This is one of those pivotal moments where we really need to think, ‘Are we going to have people who are going to stand up and be able to take all the criticism?’ Because there is clearly a weakness on this issue for my opponents in the Primary, and we cannot have any weaknesses.

“The stakes are so much higher now, and it’s much more important that we have the voice of a mom, of a woman who has always stood by our values and hasn’t been wishy-washy.”

Bloom, who served three terms in the House between 1974 and 1995, had a miscarriage in 1960. The doctor refused to treat her accordingly until she began to expel the products of conception at home. More than a decade later, she had a breakthrough pregnancy despite using an intrauterine device. Doctors still would not help her.

Going back to rules that justify that kind of inaction, she said, “feel like the book, ‘The Handmaid’s Tale,’” she said.

“It really does,” she continued. “I’m 84. I shouldn’t have to relive this whole thing again, and I’m not even talking about me. This is going to affect all women.”

Regarding Florida’s new law banning abortions after 15 weeks with no exceptions for rape, incest or human trafficking — legislation nearly identical to the Mississippi bill at the center of the current Supreme Court decision — Bloom said plainly, “A 13-year-old child should not be forced to carry a rapist’s child.”

“I look forward to seeing her campaign and how she works forward on this issue,” he said.

He called the Florida abortion ban, which García has repeatedly endorsed with questionable verbiage, “absolutely disgusting.”

“Unfortunately, we have folks in Tallahassee who not only think that a woman should not have a right to choose… For some reason they think that we’re doing these folks a favor by forcing them to carry a child to term,” he said. “This originalist interpretation of our Constitution — thinking back to the 1700s, when women were treated like second-class citizens — is a backward way of thinking in 2022.”