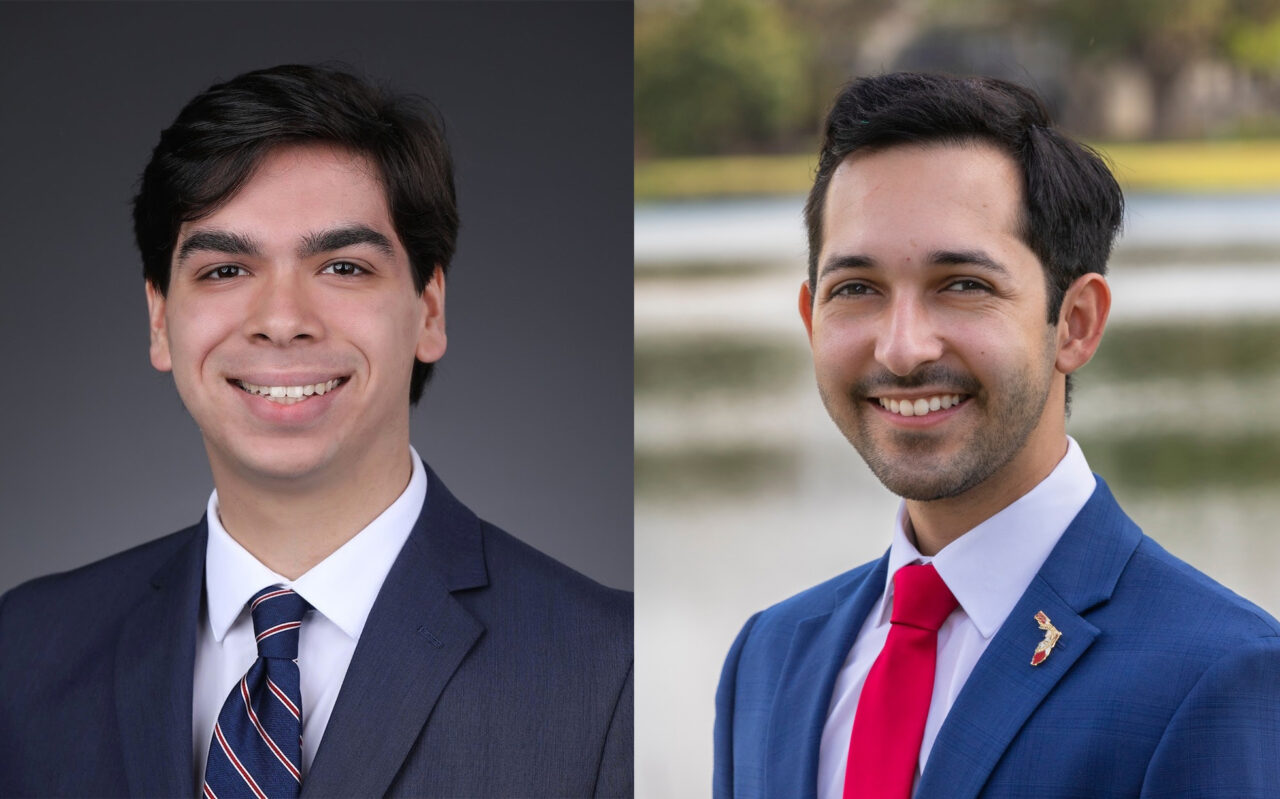 The Republican holds advantages in fundraising, party support, campaign runway and the political leanings of the district.

Regardless of who wins the seat representing House District 119 on Nov. 8, one thing is certain: the average age of Florida’s lower legislative chamber will drop.

Two members of Generation Z are vying for the seat Republican state Rep. Anthony Rodriguez is vacating to join the Miami-Dade County Commission next month.

The elder is Juan Carlos Porras, a 25-year-old former GOP operative turned business owner. His opponent, Democratic activist Gabriel Gonzalez, is 22 — one year older than is required to serve in the House.

Porras appears to be the odds-on favorite in the Republican-leaning district, which covers a strip of Miami-Dade encompassing parts of the unincorporated Crossings, Country Walk and West Kendall neighborhoods.

The Hispanic-majority district sided with Democratic gubernatorial candidate Andrew Gillum by 6 percentage points in 2019. Just one year later, however, it swung dramatically in the opposite direction as voters there sided with Donald Trump by an 8-point margin, according to an MCI Maps analysis.

Porras dominated the Aug. 23 Republican Primary, when he took 48% of the vote in a five-person contest. No one else in the race got more than 20%.

Gonzalez, meanwhile, outpaced an older, better-funded opponent to win 56% of the vote in the Democratic Primary.

The former Miami-Dade Youth Commissioner heads to Election Day again at a marked funding disadvantage. Between the late May launch of his bid for public office and Oct. 7, Gonzalez raised roughly $13,000 through his campaign account, including a $2,000 self-loan.

Porras, who announced his campaign March 31, amassed more than $266,000 and tapped his Florida GOP connections for another $46,000 worth of in-kind assistance for campaign staff, travel and polling costs through Oct. 7. His gains came overwhelmingly from corporate and organizational sources.

Conversely, the only organizational contribution Gonzalez accepted was a $500 check from the Florida Progressive Political Committee. All other donations were grassroots, with most people giving less than $100.

Neither man has served in elected public office before, but both boast pertinent experience.

Porras earned a bachelor’s degree in political science from Florida International University, where he served as President of the FIU College Republicans.

He got his start in government work by interning in the office of U.S. Sen. Marco Rubio, who was one of his professors at FIU. After serving as chapter president of Turning Point USA and southern regional director of the Florida Federation of College Republicans, he worked in the offices of U.S. Sen. Rick Scott and state Reps. Juan Fernandez-Barquin, Alex Rizo, and Spencer Roach.

In an interview with the Miami Herald, Porras expressed complete opposition to abortion and support for Gov. Ron DeSantis’ program to fly migrants who cross over the U.S. border illegally into northern, Democratic-led states.

Gonzalez, who won a Miami Herald Silver Knight award in 2018 after he founded a nonprofit that collects toys and books for children battling cancer, disagreed on both fronts. He called himself a “pro-choice champion” and likened the migrant-relocation plan to human trafficking.

Gonzalez worked for two years as an intern to former Miami-Dade Commissioner Juan Zapata and spent another four months interning in Washington, where he says he wrote legislative language to be considered on the Senate floor.

He is a member of the Democratic Executive Committee, is a student mentor with the Hispanic Scholarship Fund, and graduated this year with a bachelor’s degree in political science from Columbia University, according to his LinkedIn page. While there, he served as a print editor of the school’s Undergraduate Law Review.

If elected, Gonzalez pledged to fight energy monopolies to make it easier for Floridians to transition to clean and renewable energy sources, protect the Urban Development Boundary while working to invest in affordable housing and take a multifaceted approach to stimulate the economy and support small businesses.

As a member of the LGBTQ+ community, he also promised to fight for strong state protections for LGBTQ+ rights and to oppose trans sports bans and the “Parental Rights in Education” measure, which critics labeled the “Don’t Say Gay” law. That latter legislation, among other things, limits classroom instruction on gender identity and sexual preference.

Gonzalez did not employ a consulting firm to spend roughly $12,000, which covered campaign materials and various voter outreach and canvassing activities.