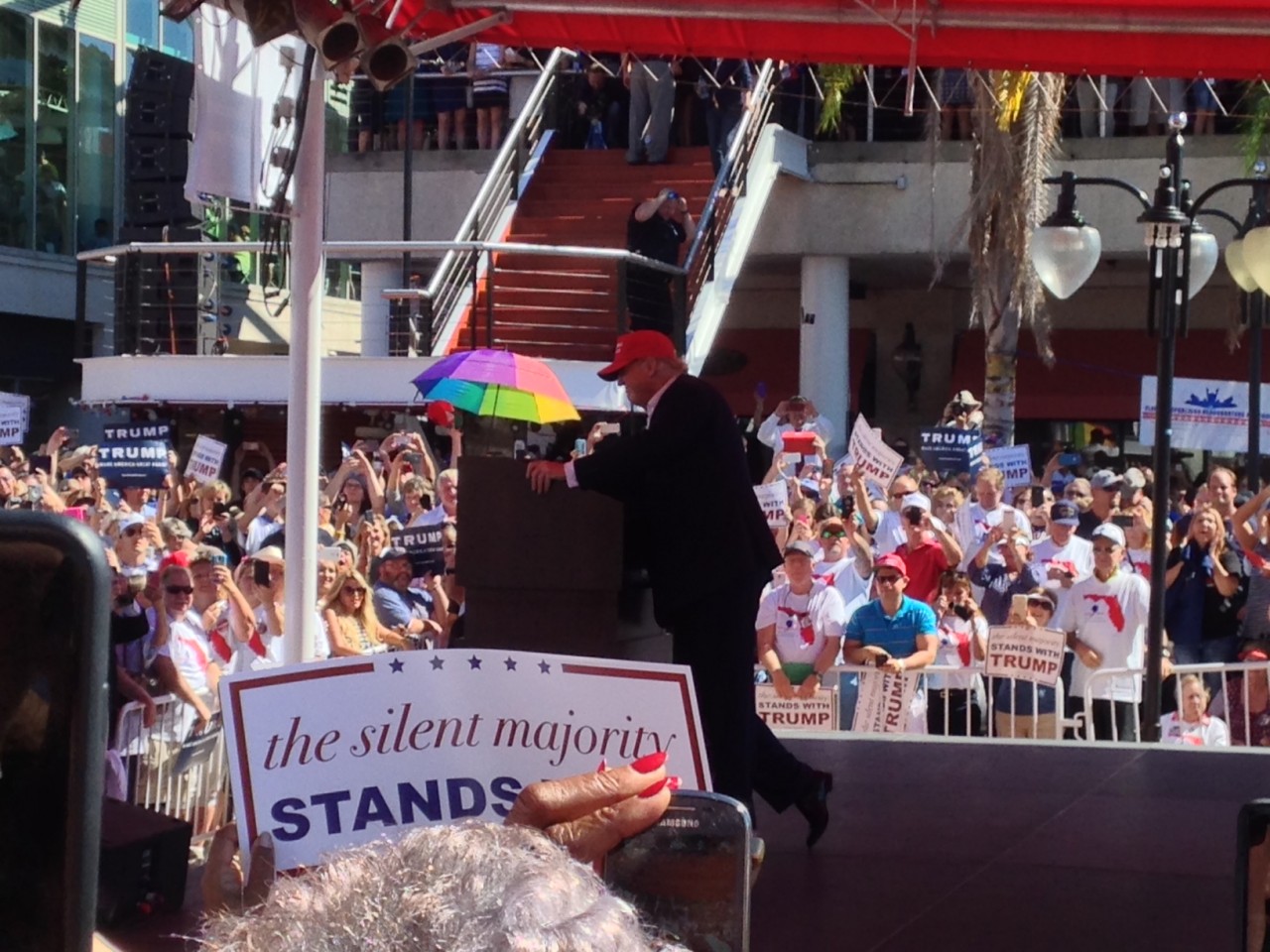 Donald Trump thrills the crowd at the Jacksonville Landing.

Say what you will about GOP Presidential frontrunner Donald Trump, he knows how to draw a crowd. Even an hour before his rally was to start at the Jacksonville Landing, a hundred or so Trump fans lined up, looking less like a political movement and more like dinner rush queue at the Golden Corral buffet.

Conversation in line? As pasty as the faces were of the largely middle-aged and middle-class scions of the subdivision set were, the chatter was colorful, with phrases from those waiting like “I’m friends with lots of illegals and they all love Trump”, “the Benghazi hearing was a great hearing,” and enthusiastic defense of open carry gun laws, with laments that pocket knives couldn’t be brought into the rally.

Camo caps and American flag visors: the headgear of choice.

The crowd was admitted just before 10 a.m. and quickly the Landing’s lower patio filled to capacity, crowding around the stage as the sun beat down on the concrete, and a hypeman extolled them off and on during the next couple of hours with shtick like “I’m not going to wait for the programmed politicians to tell me what to do and how to do it.”

And there was also an easy listening version of “Sweet Home Alabama” sang by some hanger on. Southern Strategy in the house!

As the Trump operation moves from novelty to what functions as maturity, the appeal is obvious, and surprisingly retro. His adoption of the “silent majority” phrase, a hallmark of this weekend’s stumping in the Sunshine State, owes an obvious debt to Richard Nixon. But there is, of course, some George Wallace in there, in terms of an overt populism that seems directed to appeal to people who are at least one promotion away from prosperity, even as their Golden Years loom.

Luckily for Trump, that is a prime demographic in the Bold New City of the South, and he is uniquely positioned to exploit it. A rhyming poem from Billie Tucker, the founder of the First Coast Tea Party, was read, which shouldn’t surprise much, given that the Tea Party had its big local launch event there last decade. Sample line: “we’re here today for the red, white, and blue.”

Beyond the Tea Party support, he also has Susie Wiles on board as Florida Co-Chair, and he gave props to Landing owner (and supporter of the last two losing mayoral candidates) Toney Sleiman as well as current mayor Lenny Curry.

Trump came out, finally, some minutes after noon (to the chagrin of the crowd, who somehow thought that because he’s a “businessman,” he should “be on time) to rapturous applause.

“This is happening all over,” Trump said, who then went into his favorite mode (indeed, the only one he’s comfortable with): First Person Narration.

It’s a wonder the “I” works on his keyboard, given how incessant the self-referentialism is. He talked about the “bad press” he’s been getting, before giving the people what they want: a voice for their anger at the decline in America’s standard of living, a trope which takes many forms.

We have, said Trump, the highest taxes in the world, but we’re 28th in education, with “3rd world nations” better in education than America is… thanks to Jeb Bush and other adherents of Common Core.

He also revisited his anti-PAC polemic, talking about how they “control candidates” like Bush, Ben Carson, and Marco Rubio.

And another easy target: Obamacare, which is a “disaster,” he said, mirroring his spiel from Doral the previous evening.

As well, “we can’t beat ISIS.” And, as ever, any candidate within spitting distance of Trump in the polls is “low-energy.”

Speaking of polls, Trump is, as ever, obsessed with them… and assumes the hoi polloi are just as fascinated.

He talked about the ABC/Washington Post poll that had him at 32%, about “killing everybody, including the Governor” in New Jersey, about being “up so much in Nevada that’s it’s embarrassing.”

And the Hispanics? Are you sitting down?

They love him. He’s Number One with them.

He’s a bad dude, for sure. Not like Ben Carson, who Trump says couldn’t negotiate with China.

And not like the mendacious malingerers of the media, who are “so bad, so disgusting, so dishonest.”

Perhaps they should spend more time talking about Bush, who Trump says has a “failing campaign,” and Rubio, who sweats a lot.

Trump regaled the crowd with a description of his Doral speech the previous night. The crowd, “80 percent Hispanic” was “going wild” and “loving it” and practically dying for him to mention The Wall.

No, they weren’t Pink Floyd fans; they wanted a wall built on the Mexican border. Almost as bad as the overflow crowd at the landing, who chanted Build the Wall for some seconds.

And no worries! Mexico will pay for it. Perhaps there’s a NAFTA Groupon they can use.

He brought out the classics also: “We’re run by stupid people” is still being used, the rhetorical equivalent of a James Brown funky drummer sample in an 80s hip hop song.

And “politicians are all talk, no action; nothing gets done.”

But he also brought out some new material, such as a rant about “currency devaluation and manipulation” used by “every country that’s killing us.”

Implied: to keep up, such tactics need to be in the American playbook.

As the speech winded on, a steady stream of audience members filed out, presumably to Make America Great Again, while at least one fainted from the heat.

If only Trump’s roadies had thought about giving bottled water to people in the crowd to stave off heat exhaustion as they sweltered in the sun, that could have been avoided.

But such logistical concerns are not Donald Trump’s problem.