Or “yay ball,” as one of my techie staff members used to say (she had zero interest in football, etc.) Yay sports, indeed. This weekend was awesome for sports, with the most thrilling Super Bowl ever. And I also attended the Kentucky-Florida basketball game; what a battle in the brand-new Gville arena.

If you love hoops, watching 6 of the top 10 teams get knocked out Saturday was exciting; for Gator fans, a 20-point whipping of Kentucky (doesn’t happen often) so we get to enjoy that one for a while.

Fast forward to Sunday; seeing Lady Gaga bring the thunder in her Super Bowl halftime performance, then wondering how she got on the roof.

And HOW IN THE WORLD IS THAT AMERICAN FLAG FLOATING IN THE SKY?

Also, on another subject, a huge shoutout to LG for her message of unity and being pro-America. So many haters out there nowadays. Best country ever, 42 years as a resident. No plans to leave — regardless of Carter, Reagan, Clinton, Bush, Obama, Trump or whoever is in the White House.

I would stay even if Lady Gaga was president. Cool outfit she was rocking; very presidential.

There is no need to comment on a flying drone pug, is there?

So, how are there lights in the sky above the game?

My dad lives in Houston and the only flights he says are allowed around the Dome game weekend are Military Black Hawk choppers. So, what are those lights again?

Each dot is actually a flying drone, part of Intel’s Shooting Star Drone squad. Each one is about a foot long and covered in LED lights. The drones are all programmed from a central location that runs a dance routine.

Talk about a big stage, taking account the fact that security was as tight as any game in history, the stadium is in Houston Hobby Airport’s flight path, as well as the aforementioned aircraft ban around the stadium. 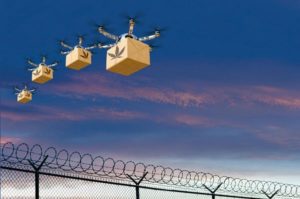 How about this, it really didn’t happen during the Super Bowl. The drone show was taped the week earlier and overlaid into the live broadcast for the TV audience.

That is the world we live in. Princess Leia is in Rouge One looking 19 and drones are on the television, but not live. POW!

In years to come, drones change the way we do a lot of things: weaponized drones, real-estate drones and cargo drones.

What’s next? How about reconnaissance drones for missing persons lost in the woods? Drones for agriculture, police, elections (dropping pamphlets) and firefighting.

Cartels down south are early adapters of this kind of tech for drug smuggling at borders and in prisons.

Think about it, a drone operator a mile away from a prison packs up a drone with Oxycodone, weed and the like, flies it over the walls of the prison, dropping the package into the common area. Pickups are smooth and no one gets shanked.

Same with drugs at the border: fly it, drop it, head back to base for another. Drones fly low and are small, making radar useless.

Prisons are beginning to use low-tech countermeasures, with nets over a facility’s yard. Meanwhile, high-tech options like DroneShield are rolling out, and others — like the DroneGun — can disable a drone by jamming it.

Although as done tech moves forward, I am sure some Polk County residents will take them out with a high-powered rifle.

With any new tech, it is very interesting and cool to see where the journey goes, but also scary to see how bad guys will take advantage.

Enjoy the day when a drone brings you a pizza. And if you ever see something like that heading your way, duck and cover, brother.

(By then, though, it’s most likely too late.) Blake Dowling is CEO of Aegis Business Technologies and writes for several organizations. He can be reached at dowlingb@aegisbiztech.com.