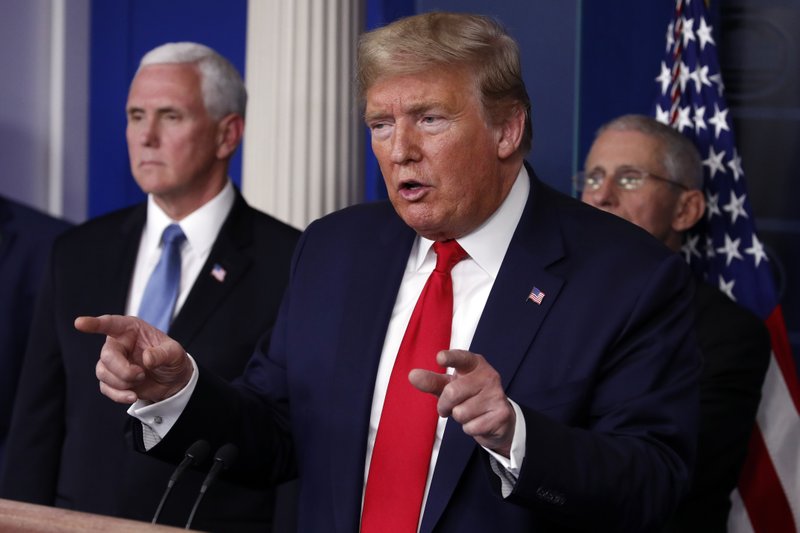 His target date for easing coronavirus restrictions is another outstretched hand.

President Donald Trump’s “beautiful” idea to reopen the U.S. economy by Easter Sunday and pack church pews that day was dreamed up during a conference call among business leaders desperate to get the country back up and running.

But his target date for easing coronavirus restrictions is another outstretched hand to a group he has long courted: evangelical Christians.

Cooped up at the White House and watching the stock market tumble, Trump had already been eager to ease federal guidelines aimed at halting the spread of a virus that has infected more than 55,000 Americans when about a dozen business leaders convened a conference call on Sunday.

“There was a concern — not unanimity, but consensus — that you had to have a reopening of the economy at some point soon,” said Stephen Moore, a conservative economist and informal Trump adviser. On the call, Moore said, he argued in favor of setting a specific date as a goal by which point the economy could gradually begin to be reopened.

“One of the things we were saying was that this would instill some confidence in people, that there would be some kind of light at the end of the tunnel,” he said.

While many wanted to see that date set even sooner than Easter, “it’s something that’s coming up that would be obviously a mark on someone’s calendar,” Moore said. “I had made this point that we should call this economic resurrection day.”

Though it’s unclear exactly when the idea made its way to Trump or whether others in his orbit had pegged the date as well — one official said they had heard the idea mentioned multiple times around the Oval Office — by late Sunday, Trump was publicly siding with such thinking, tweeting: “WE CANNOT LET THE CURE BE WORSE THAN THE PROBLEM ITSELF.” On Monday, he said he was considering easing his administration’s recommendations that Americans largely stay home within weeks, not months. And on Tuesday, he formally endorsed the idea of an Easter goalpost during a Fox News Channel virtual town hall.

“Easter’s a very special day for me. Wouldn’t it be great to have all of the churches full?” Trump later told Fox. “You’ll have packed churches all over our country. I think it would be a beautiful time.”

The idea drew alarm from many public health experts, who noted that even New York — thought to be several weeks ahead of the rest of the nation — has yet to reach its peak in infections. Unless Americans continue to isolate themselves for weeks, those experts warn, a virus that has already killed more than 800 people in the U.S. will continue to spread like wildfire across the nation, overwhelming hospitals already starved of needed supplies.

But for conservative evangelicals who remain among Trump’s most ardent supporters, the president’s choice of the holiest date on their faith’s calendar was meaningful even as a purely aspirational goal to reboot American life.

The timeline “injected hope into an indefinite ordeal,” said Johnnie Moore, an evangelical adviser to the administration. “And it was very clear in hearing him speak that not only is there an end to this … but when we do win it, we’re going to have a celebration, and that celebration will partly include gratitude to God.”

Ralph Reed, a veteran GOP activist and Trump ally who chairs the Faith & Freedom Coalition, cautioned that restrictions shouldn’t be eased “if it’s a bad idea from a public health standpoint,” but also welcomed the Easter target.

“I will be encouraging the White House, again within the parameters of what makes sense from a public health standpoint, to do everything we can to make that date,” Reed said, “because I think it would be symbolic, it would be significant, it would be inspirational.”

To that end, the White House has been discussing the mechanics of a rollback aimed at getting Americans back to work if they don’t live in current virus hot spots. Among the ideas under discussion: advising that those who are most at risk for severe complications — including seniors — continue to isolate themselves, while younger people go back to work.

For most people, the coronavirus causes mild or moderate symptoms, such as fever and cough, that clear up in two to three weeks. But for some, especially older adults and people with existing health problems, it can cause more severe illness, including pneumonia, and death. The vast majority of people recover.

Even if Trump were to ease federal guidelines, states across the country, from California to New York, have already put in place a patchwork of rules to try to halt the virus’ spread. The administration has so far said it has no plans to try to overrule local restrictions.

The White House, meanwhile, has been holding calls with those who might publicly back its plans, including conservative allies of the president. Reed said he was among two dozen allies who participated in one call Tuesday with Vice President Mike Pence on which the Easter target was not discussed.

Pence did “make it clear that the objective is to get the country open again in weeks, not months,” while relying on “data and public health imperatives,” Reed said.

Pastor Tony Suarez, another evangelical Trump ally, said he hopes the Easter target can be achieved, to “celebrate a national resurrection and an economic resurrection as we celebrate the Resurrection.”

But even among white evangelicals who are a key component of the president’s political base, there were reservations. National Association of Evangelicals President Walter Kim said that many who share his faith “wish to do what is in the best interest of society as a whole,” citing decisions to cancel physical worship services and various programs.

Kim added that any “celebrations we pursue on Easter would need to be in that spirit of life.”

For Suarez, Trump’s choice of an Easter target remains an important gesture regardless of whether he goes through with it. Suarez, executive vice president at the National Hispanic Christian Leadership Conference, described the president’s elevation of that date as a fresh signal of the “respect within the administration for the word of God and for Christian faith.”

Among those signals, Suarez noted, was Pence’s call during a Saturday briefing by the coronavirus task force he leads for Americans to keep donating to their local ministries when most houses of worship have moved their services online.