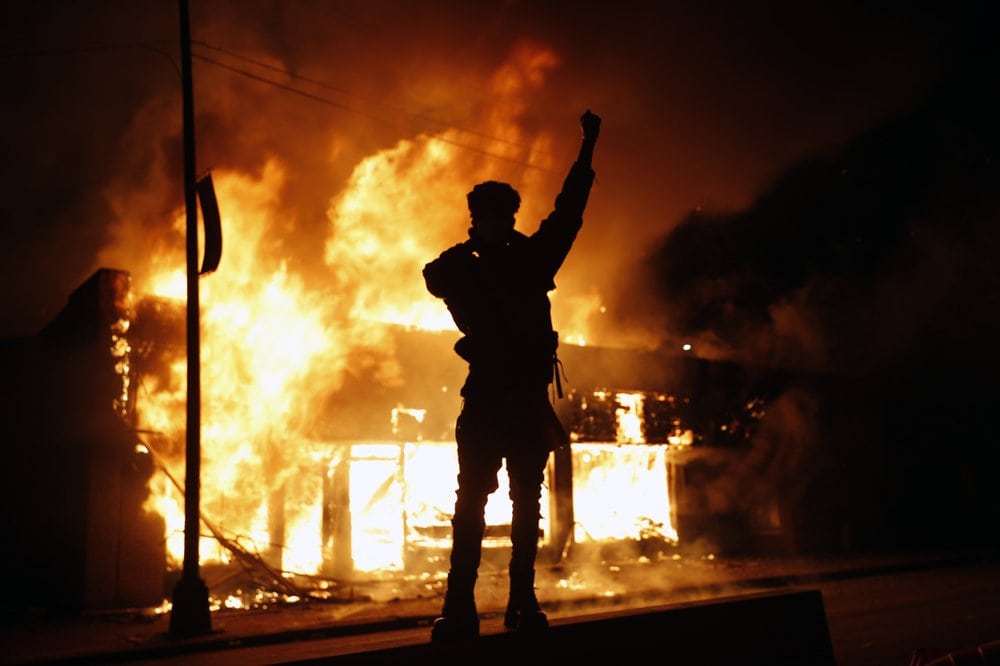 Even the 1,700 National Guardsmen deployed to Minnesota may not be enough.

Fires burned unchecked and thousands protesting the police killing of George Floyd ignored a curfew as unrest overwhelmed authorities for another night in Minneapolis, and the governor acknowledged Saturday that he didn’t have enough manpower to contain the chaos.

The new round of tumult — which has also spread to other cities — came despite Minnesota Gov. Tim Walz vowing Friday to show a more forceful response than city leaders had the day before. But by early Saturday morning, Walz said he didn’t have enough troops, even with some 500 National Guardsmen.

“We do not have the numbers,” Walz said. “We cannot arrest people when we are trying to hold ground.”

Walz said he was moving quickly to mobilize more than 1,000 more Guard members, for a total of 1,700, and was considering the potential offer of federal military police. But he warned that even that might not be enough, saying he expected another difficult night Saturday.

The Pentagon on Saturday ordered the Army to put military police units on alert to head to the city on short notice at President Donald Trump’s request, according to three people with direct knowledge of the orders who did not want their names used because they were not authorized to discuss the preparations. The rare step came as the violence spread to other cities: A man shot dead in Detroit, police cars battered in Atlanta and skirmishes with police in New York City.

Criminal charges filed Friday morning against the white officer who held his knee for nearly nine minutes on the neck of Floyd, a black man who was handcuffed at the time, did nothing to stem the anger. Derek Chauvin, 44, was charged with third-degree murder and second-degree manslaughter.

Minneapolis police said shots had been fired at law enforcement officers during the protests but no one was injured.

As the night dragged on, fires erupted across the city’s south side, including at a Japanese restaurant, a Wells Fargo bank and an Office Depot. Many burned for hours, with firefighters again delayed in reaching them because areas weren’t secure.

Shortly before midnight, scores of officers on foot and in vehicles moved in to curb the violence, one day after city and state leaders faced blowback for their handling of the crisis. On Thursday, protesters had torched a police station soon after it was abandoned by police and went on to burn or vandalize dozens of businesses.

The Minnesota Police and Peace Officers Association urged Walz to accept any help.

Not all the protests were violent. Downtown, thousands of demonstrators encircled a barricaded police station after the 8 p.m. Friday curfew. “Prosecute the police!” some chanted, and “Say his name: George Floyd!” Some protesters sprayed graffiti on buildings.

Anger filled the streets of Minneapolis.

“I’m outraged,” he said of the Floyd case. “But I’m also sad. The injustice has been going on for so long. It’s been swelling for years.”

Chauvin was also accused of ignoring another officer who expressed concerns about Floyd as he pleaded that he could not breathe, while Chauvin pressed his knee into his neck for several minutes. Floyd had been arrested on suspicion of using a counterfeit $20 bill at a store.

Chauvin, who was fired along with three other officers who were at the scene, faces more than 12 years in prison if convicted of murder.

An attorney for Floyd’s family welcomed the arrest but said he expected a more serious murder charge and wants the other officers arrested, too.

Prosecutor Mike Freeman said more charges were possible, but authorities “felt it appropriate to focus on the most dangerous perpetrator.”

Protests nationwide have been fueled by outrage over Floyd’s death and years of police violence against African Americans. Protesters smashed windows at CNN headquarters in Atlanta, set a police car on fire and struck officers with bottles. Large demonstrations in New York, Houston, Washington, D.C., and dozens of other cities ranged from people peacefully blocking roads to repeated clashes with police.

Police were trying to put Floyd in a squad car Monday when he stiffened and fell to the ground, saying he was claustrophobic, a criminal complaint said. Chauvin and Officer Tou Thoa arrived and tried several times to get the struggling Floyd into the car.

Chauvin eventually pulled Floyd out of the car, and the handcuffed Floyd went to the ground face down. Officer J.K. Kueng held Floyd’s back and Officer Thomas Lane held his legs while Chauvin put his knee on Floyd’s head and neck area, the complaint said.

When Lane asked if Floyd should be rolled onto his side, Chauvin said, “No, staying put is where we got him.” Lane said he was “worried about excited delirium or whatever.”

An autopsy said the combined effects of being restrained, potential intoxicants in Floyd’s system and his underlying health issues, including heart disease, likely contributed to his death. It revealed nothing to support strangulation as the cause of death.

There were no other details about intoxicants, and toxicology results can take weeks. In the 911 call that drew police, the caller describes the man suspected of paying with counterfeit money as “awfully drunk and he’s not in control of himself.”

After Floyd apparently stopped breathing, Lane again said he wanted to roll Floyd onto his side. Kueng checked for a pulse and said he could not find one, according to the complaint.

Chauvin’s attorney had no comment when reached by The Associated Press.

The prosecutor highlighted the “extraordinary speed” in charging the case four days after Floyd’s death and defended himself against questions about why it did not happen sooner. Freeman said his office needed time to gather evidence, including what he called the “horrible” video recorded by a bystander.

Trump said Friday that he’d spoken to Floyd’s family and “expressed my sorrow.”

He called video of the arrest “just a horrible thing to witness and to watch. It certainly looked like there was no excuse for it.”

Attorney Benjamin Crump, who is representing Floyd’s family, asked to take custody of Floyd’s body for an independent autopsy.

The doctor who will do the autopsy is Michael Baden, former chief medical examiner of New York City. He was hired to do an autopsy for Eric Garner, a black man who died in 2014 after New York police placed him in a chokehold and he pleaded that he could not breathe.