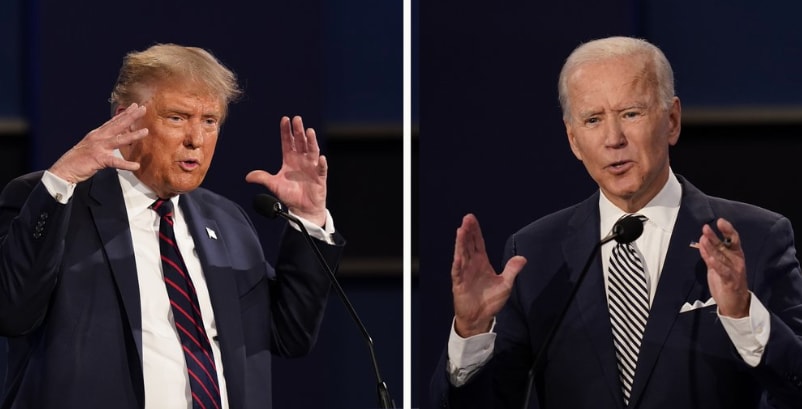 Biden subsequently switches to another event for Oct. 15.

President Donald Trump declared he would not do a virtual debate with Joe Biden after the commission arranging presidential debates announced the second debate set for next Thursday would be virtual.

The nonpartisan Commission on Presidential Debates debates made the announcement Thursday morning, a week before the two were scheduled to face off in Miami, “in order to protect the health and safety of all involved with the second presidential debate.”

Trump then said on Fox Business later that morning: “I’m not going to do a virtual debate.”

He told Maria Bartiromo, on the show, “Mornings with Maria.” that the commission did not tell the campaigns about this plan before they made an announcement. Trump said he learned minutes before his interview.

“I’m not going to waste my time on a virtual debate,” Trump said.

At about the same time, on the Fox News show “Fox and Friends” former Florida Attorney General Pam Bondi, a Trump campaign adviser, blasted the virtual debate proposal saying, that Biden could cheat.

Biden’s campaign later responded by saying it would schedule a town hall for him alone that night.

“Joe Biden was prepared to accept the CPD’s proposal for a virtual Town Hall, but the President has refused, as Donald Trump clearly does not want to face questions from the voters about his failures on COVID and the economy. As a result, Joe Biden will find an appropriate place to take questions from voters directly on October 15th, as he has done on several occasions in recent weeks,” Deputy Campaign Manager and Communications Director Kate Bedingfield said in a written statement. “Given the President’s refusal to participate on October 15th, we hope the Debate Commission will move the Biden-Trump Town Hall to October 22nd, so that the President is not able to evade accountability. The voters should have a chance to ask questions of both candidates, directly. Every Presidential candidate since 1992 has participated in such an event, and it would be a shame if Donald Trump was the first to refuse.”

According to the commission’s proposal, the candidates would “participate from separate remote locations,” while the participants and moderator remain in Miami, the commission said.

Trump was diagnosed with the coronavirus a week ago and but in a Tuesday tweet said he looked forward to debating Biden on stage in Miami, “It will be great!” he tweeted.

Biden, for his part, said he and Trump “shouldn’t have a debate” as long as the president remains COVID positive.

Biden told reporters in Pennsylvania that he was “looking forward to being able to debate him” but said “we’re going to have to follow very strict guidelines.”

Trump fell ill with the virus last Thursday, just 48 hours after debating Biden in person for the first time in Cleveland. While the two candidates remained a dozen feet apart during the debate, Trump’s infection sparked health concerns for Biden and sent him to undergo multiple COVID-19 tests before returning to the campaign trail.

Trump was still contagious with the virus when he was discharged from Walter Reed National Military Medical Center on Monday but his doctors have not provided any detailed update on his status. According to the Centers for Disease Control and Prevention, those with mild to moderate symptoms of COVID-19 can be contagious for as many as — and should isolate for at least — 10 days.

Trump received an experimental antiviral cocktail made by Regeneron through a “compassionate use” exemption, a recognition of the above-and-beyond standard of care he receives as president. The safety and effectiveness of the drug have not yet been proven. And there is no way for the president or his doctors to know that the drug had any effect