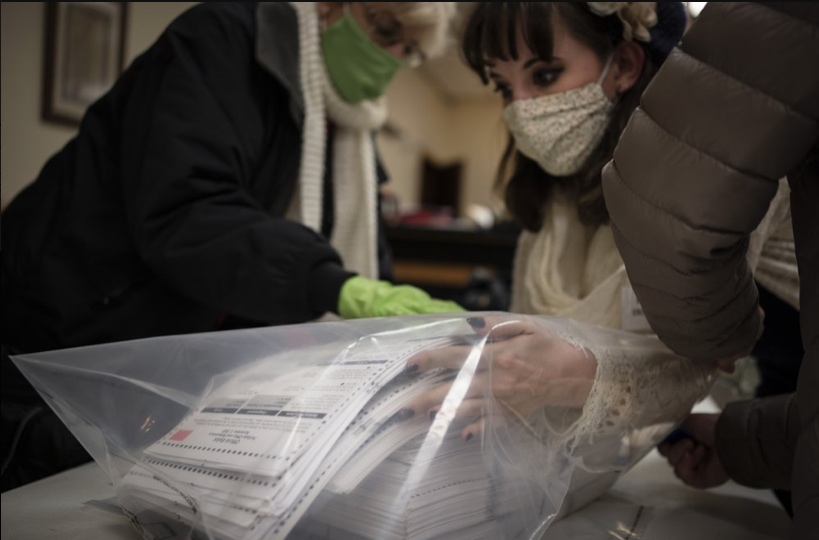 The National Association of Evangelicals and the National African American Clergy Network joined in support.

Usual foes at the U.S. Chamber of Commerce and AFL-CIO issued a joint statement Wednesday demanding that election officials count all legal ballots.

The letter comes hours after President Donald Trump called for vote counting to cease during an early morning press conference in which he declared victory, prematurely, in the presidential election.

Wisconsin, Michigan, Pennsylvania and North Carolina are among the states that are too close to call, with former Vice President Joe Biden‘s chances to reach 270 electoral votes looking increasingly better.

“Although we may not always agree on desired outcomes up and down the ballot, we are united in our call for the American democratic process to proceed without violence, intimidation, or any other tactic that makes us weaker as a nation,” they wrote. “A free and fair election is one in which everyone eligible to cast a ballot can, all ballots are counted consistent with the law, and the American people, through their votes, determine the outcome.”

In their letter, the leaders demanded that voters be allowed to safely cast ballots without interference, suppression or fear of intimidation.

And with the longer ballot counting times in part because of COVID-19, they demanded officials count every ballot and that people remain patient. But they also requested timely and accurate information from the election officials.

“With voting ending today, it is imperative that election officials be given the space and time to count every vote in accordance with applicable laws,” they wrote. “We call on the media, the candidates and the American people to exercise patience with the process and trust in our system, even if it requires more time than usual.”

Addressing the nation from the White House after 2:15 a.m., Trump claimed the election was already rife with fraud and accused the media of calling states it shouldn’t have called, most notably Arizona. Some outlets put Arizona likely in Biden’s column early Wednesday, but the state is still in the too-close-to-call range with votes still being counted, which most major networks acknowledge even as Biden leads there by about 93,000 votes.

“We want all voting to stop,” Trump said as vote totals in Pennsylvania, Michigan and Wisconsin, among others, were still being counted. “We don’t want them to find any ballots at 4 o’clock in the morning.”

The President said he would take his effort to stop the ballot counting to the Supreme Court.

Commitments to fair elections are important for the American republic and democracy, the coalition wrote.

“It is important to remember that challenges are a normal part of every election,” they said. “We are confident our country and its institutions can rise to this historic moment.”