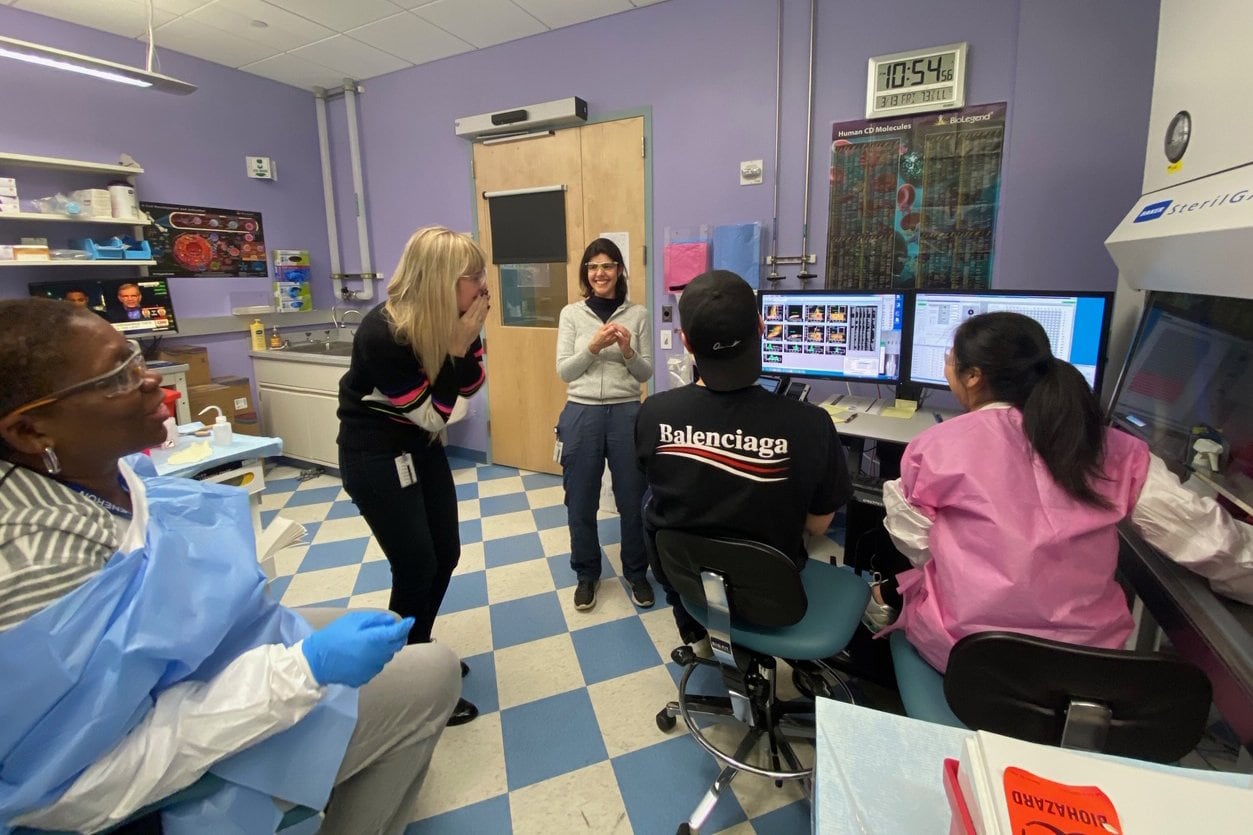 Regeneron eventually was used to treat President Donald Trump during his COVID-19 recovery.

On a Saturday afternoon in March as COVID-19 was bearing down on New York City, a dozen scientists anxiously crowded around a computer in a suburban drug company’s lab. They had spent weeks frantically getting blood from early survivors across the globe and from mice with human-like immune systems — all to test thousands of potential treatments.

Now it was time for results.

The screen flashed totals of glowing green dots, hundreds or thousands in most samples. Then they saw some 10s, some twos and finally, zeroes.

The researchers cheered and their boss sent out for champagne.

No dots meant no infected cells. The scientists had found antibodies that block the coronavirus.

This was the start of a drug that would, eventually, go into the arms of a U.S. President and others fighting off COVID-19.

Antibodies are substances the immune system makes to bind to and help eliminate a virus, but it takes several weeks after infection or vaccination for the most effective ones to form. Drugs like the one these scientists at Regeneron Pharmaceuticals were developing are intended to help right away, by supplying concentrated doses of one or two antibodies that work best.

The drugs, administered by IV, are being tested to prevent infection in people at high risk of it who can’t yet get a vaccine, such as housemates of COVID-19 patients. They’re also being tried as a treatment soon after infection to avoid serious illness.

They are some of the most complex medicines that exist, made in a tedious, high-tech process with the risk of ruin at every step. Unlike chemicals that are simply mixed in a lab, antibodies are coaxed from living cells. Companies have used cells from a whole menagerie — monkeys, hamsters, mice, horses, cows, llamas.

Each drug starts with a single coronavirus survivor.

Eli Lilly, for example, worked with AbCellera, a company in Canada that got a potent antibody from an early case there. GlaxoSmithKline and Vir Biotechnology found one in blood frozen for years in a Swiss lab from a survivor of SARS, another coronavirus that caused a deadly outbreak in 2003.

Regeneron’s two-antibody drug is unique: One came from a COVID-19 survivor in Singapore and the other from the company’s genetically modified mice.

People make hundreds or thousands of types of antibodies after infection but “most of them are not very good” at blocking the coronavirus, said Christos Kyratsous, a microbiologist who helped lead Regeneron’s work. “You’re looking for the needle in the haystack” to find one that does, he said.

The quest began in January, when Chinese scientists identified the novel virus. Dr. Sumathi Sivapalasingam, a Regeneron scientist who had worked at the U.S. Centers for Disease Control and Prevention, started seeking blood samples from people who’d been infected early on, long enough ago to have made good antibodies.

“We were essentially calling people from all over the globe” — China, Thailand, the United Kingdom, Europe — with no luck, she said.

Out of the blue, they got a call from Dr. David Lye of Singapore’s National Center for Infectious Disease. He knew Regeneron had antibodies for Middle Eastern Respiratory Syndrome or MERS, a similar coronavirus disease. COVID-19 cases were starting to mount and “I was thinking what else there was to do” because no treatments had yet been shown to help, Lye said.

The scientists quickly ruled out using the MERS antibodies but agreed to seek some for the new virus. Lye asked three of his patients — two men and a woman who had recovered from COVID-19 pneumonia — to give blood.

It was dicey. Blood cells survive for roughly two days and the flight to New York takes 18 hours. The samples then would have to clear customs and be driven to Regeneron’s lab in Tarrytown, New York.

“It was exciting” yet terrifying, Lye said. “I was concerned whether a flight delay or any mistake along the way would render the samples useless.”

“The blood was warm in the tube” when a courier rushed it to the Singapore airport, Sivapalasingam said.

It arrived on March 13, the day COVID-19 was declared a national emergency in the United States. Sivapalasingam was working late at home when she got an email from colleagues at the lab.

“They were jumping up for joy because the cells were fresh and viable and perfect,” she said.

Meanwhile, others were working with what Regeneron’s chief executive calls its “magical mice,” animals bred to have human-like immune systems. When vaccinated with a piece of the virus, they don’t get sick but make “almost identical antibodies to what humans would make,” Kyratsous said. It takes just 20 to 30 of these mice to develop a drug.

Blood from the mice and patients contains B cells, and each makes a specific antibody that’s carried on its surface. The goal is to find antibodies that stick to the virus and block it from infecting cells.

Scientists first screen the B cells by mixing them with part of the spiky protein that covers the virus and sorting out cells with antibodies that connect. Next, researchers decode the genetic recipes for each antibody. The genes are put into a type of hamster cell widely used in the drug industry because they grow very rapidly and churn out the chosen antibody like mini-biofactories.

Then comes the big challenge: testing each antibody by mixing it with uninfected cells and a “pseudovirus” — a tame virus that’s been modified to carry the spike protein and to glow green if it gets inside a cell.

Each antibody goes into a well in a gridded, plastic container like a massive ice cube tray. A computer attached to a microscope counts how many cells in each well are infected to see how successfully each antibody blocked the virus.

These are the results Kristen Pascal went to the lab to get on Saturday, March 14.

She recalled that she had “brought in pizza and pie for Pi Day,” a day scientists celebrate because 3, 1 and 4 are the first three digits of pi, an important number in math.

Kyratsous, other managers and company co-founder Dr. George Yancopoulos hovered behind her chair as the computer counted glowing dots.

“I’m getting maybe 1- and 2,000 green spots in each well,” then some hit 10 and a few hit two, she said. When they saw some zeroes, Yancopoulos ordered the champagne.

“We had really, really good antibodies,” she said. “We knew we were in good shape, that we were going to actually be able to make a difference with this.”

Those antibodies were just from the mice. Two weeks later, the process was repeated on the human samples from Singapore.

In all, Regeneron tested more than 3,300 antibodies — pitting the finalists against each other like gladiators in the lab — before choosing two that bound to the spike protein at different spots to make it tougher for the virus to escape.

“There was a huge sense of relief because you’ve selected the best antibodies … but it was very, very stressful because you can’t go back,” Kyratsous said. “These are the ones that are going to go into production.”

Dan Van Plew’s job is to take what he calls “the recipe” from the Tarrytown lab, put it through his “test kitchen” at Regeneron’s production facility near Albany, New York, and figure out how to mass produce it as a drug. It’s like crafting a few artisinal cupcakes for a tasting and then getting a big wedding order, “so now I’ve got to figure out how to make a thousand for a VFW hall,” he said.

First, the fast-growing hamster cells that contain the genetic recipe for the chosen antibody are placed in a container called a bioreactor. “You’re trying to mimic a body,” keeping the cells at body temperature, bubbling in air to supply oxygen, removing carbon dioxide and supplying nutrients at the right pace so the cells multiply, he explained.

They’re gradually moved into larger and larger bioreactors — “it looks like a really big microbrewery,” Van Plew said — until the cells are so densely packed that they switch from reproducing themselves to producing the antibody.

Contamination is a constant risk.

“At any given time, I’ve probably got 1,500 people who are touching the process, whether it’s touching the product or running a biorector,” and every car they drive in, shoe they wear or thing they touch is a potential hazard, he said.

When the final bioreactor’s job is done, the contents are purified to remove bits of the cells so that all that remains are the antibodies, which are packed into vials.

Human studies started in early June. In October, President Donald Trump got the drug under “compassionate use” provisions, but there’s no way to know if it did him any good because most patients recover on their own and he received other experimental treatments, too. The Food and Drug Administration has allowed use of Regeneron and Eli Lilly antibody drugs on an emergency basis for mild and moderately ill patients who don’t need hospitalization while studies continue. Tests in more severely ill, hospitalized patients were paused amid concern that the drugs may not help in that situation.

Regeneron sells other antibody drugs for heart disease, cancer and other conditions. The MERS outbreak in 2012 was the first time it tried to quickly make one for an infectious disease. MERS turned out to not spread easily from person to person, “so as a society we were very lucky” and the company never scaled up production, Kyratsous said.

When Ebola hit in 2014, Regeneron developed antibodies and did its first production in an outbreak situation. But it took nine months, and by then cases were waning. It took another outbreak in 2018 to prove that drug’s value.

When the new coronavirus appeared, many of the same scientists were waiting.

“We knew exactly what to do … we had done this before,” Kyratsous said. “I feel like Regeneron was waiting for a moment like this.”

previousWill there be a 'White Christmas' in the Capital City?