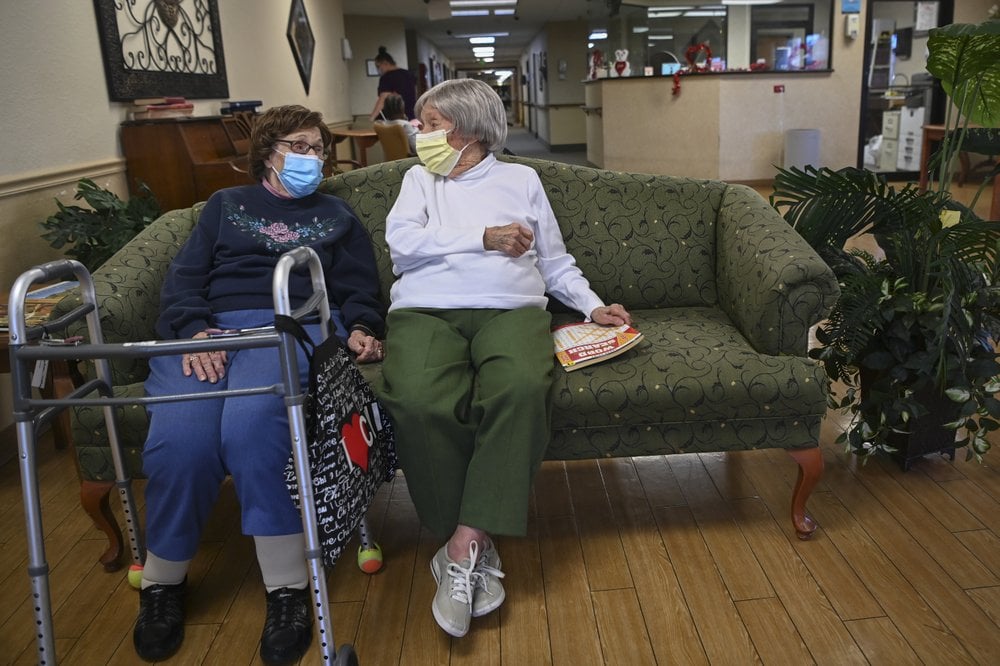 Coronavirus cases have dropped at U.S. nursing homes and other long-term care facilities over the past few weeks, offering a glimmer of hope that health officials attribute to the start of vaccinations, an easing of the post-holiday surge and better prevention, among other reasons.

More than 153,000 residents of the country’s nursing homes and assisted living centers have died of COVID-19, accounting for 36% of the U.S. pandemic death toll, according to the COVID Tracking Project. Many of the roughly 2 million people who live at such facilities remain cut off from loved ones because of the risk of infection. The virus still kills thousands of them weekly.

The overall trend for long-term care residents is improving, though, with fewer new cases recorded and fewer facilities reporting outbreaks. Coupled with better figures for the country overall, it’s cause for optimism even if it’s too early to declare victory.

“We definitely think there’s hope and there’s light at the end of the tunnel,” said Marty Wright, who heads a nursing home trade group in West Virginia.

Nursing homes have been a priority since vaccinations began in mid-December, and the federal government says 1.5 million long-term care residents have already received at least an initial dose.

Researchers and industry leaders say they are seeing marked improvements after months in which some nursing homes lost dozens of residents to the disease and had to keep others in semi-isolation for protection. Some 2,000 nursing homes are now virus-free, or about 13% nationally, according to an industry group, and many are dealing with far fewer cases than before.

The American Health Care Association and National Center for Assisted Living, an industry trade organization, said Thursday that data from about 800 nursing homes where initial vaccine doses were administered in late December offered promising results. Cases among residents fell by 48% at homes where immunizations had occurred, compared to a 21% decline at non-vaccinated facilities nearby. Meanwhile, cases among employees dropped by 33% at vaccinated homes, compared to 18% at non-vaccinated facilities.

After reaching a high of almost 73,600 new weekly cases in long-term care facilities nationwide in mid-December, the number was down 31% by late January, to about 50,000 new cases per week, an Associated Press analysis found. Still, the most recent weekly count is 18% higher than the seven-day period that ended on Thanksgiving, when numbers started climbing.

The weekly count of new deaths remains stubbornly high, with a record 7,042 recorded during the seven-day span that ended Jan. 14 and only a slight decline since. By comparison, for the seven days that ended on Thanksgiving, 3,181 deaths were recorded. More encouragingly, the COVID Tracking Project found that only 251 facilities reported new outbreaks recently, compared to 1,410 in early January.

Dr. David Gifford, chief medical officer for the national association, said the numbers show signs for hope since they indicate vaccines might decrease the spread of COVID-19, a finding not shown in trials.

“If verified with additional data, this could expedite the reopening of long-term care facilities to visitors, which is vital to residents’ health and wellbeing,” he said in a statement.

The ability to visit left Mark Badger and his 91-year-old father Billy, who is in an Anchorage, Alaska, nursing home, in tears. It was the first face-to-face visit in a year. Mark Badger’s mother had died at the home a year ago.

“This is a period when he really needs us,” Mark Badger said. “He’s been lonely.”

Experts caution that only some of the improvement can be linked to vaccines.

Studies from Israel show it takes a patient about 12 days for the first of the two-dose Pfizer or Moderna vaccines to provide meaningful protection, said Roni Rosenfeld, a computational epidemiologist who heads the Machine Learning Department at Carnegie Mellon University. Despite all the long-term care facility residents and workers who have received at least one dose of vaccine, those doses haven’t had enough time to work for most people, he said this week.

Health officials say other factors are likely playing a larger role, including an ebb in the post-holiday surge, an ever-larger number of people who are immune because they’ve had the disease, behavioral changes and more abundant protective gear. And they caution that there are still threats lurking, including more contagious strains of the virus and a reluctance by many nursing home workers to get vaccinated.

At Arbor Springs Health and Rehabilitation Center in Opelika, Alabama, where 19 patients died of COVID-19 early in the pandemic, none of the roughly 115 patients are infected now, said Mark Traylor, who heads the facility’s parent company, Traylor-Porter Healthcare.

“We look after each other in here. We take care of each other,” resident Susan McEachern said Wednesday as she and a friend — both wearing masks — sat in a communal room that was recently reopened because many residents had been vaccinated.

Traylor said a better understanding of how to prevent the spread of the virus and how to treat COVID-19 was the difference between “looking into an abyss” during those first weeks of the crisis and visitors now being allowed back on a limited basis.

“We’re going to be in great shape once we get everybody vaccinated,” said Traylor.

PruittHealth, which operates about 100 nursing homes in the Carolinas, Georgia and Florida, has 29 locations that are free of COVID-19 and fewer patients overall testing positive in recent weeks, said CEO Neil Pruitt.

Although more than 70% of PruittHealth’s eligible nursing home residents have been immunized, only 27% of its employees have agreed to be vaccinated, Pruitt said. Without a big improvement in that employee figure, he’s worried cases could spike again once people start traveling over spring break.