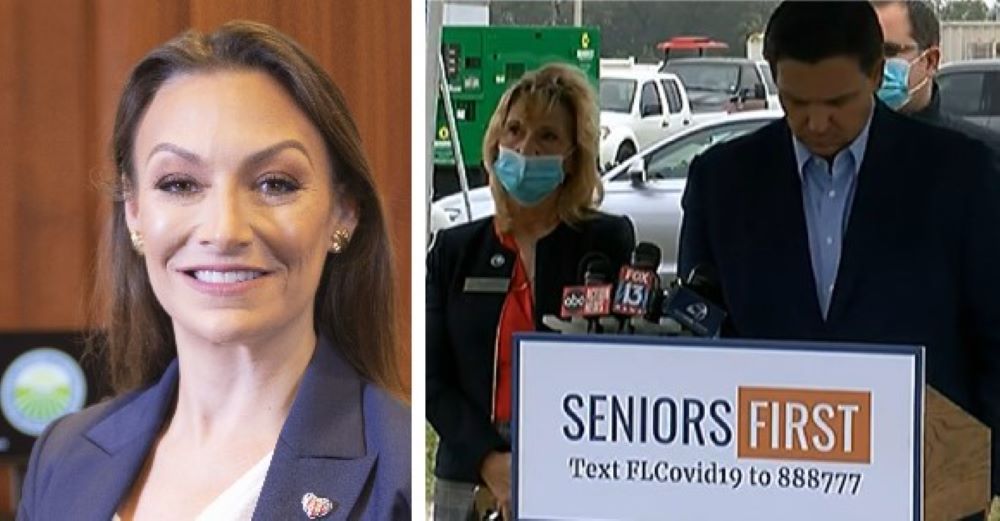 As Gov. Ron DeSantis travels the state boasting of Florida’s “seniors first” policy, Democratic leaders are calling for investigations into the allocation of coveted COVID-19 vaccines.

The political fight over the vaccines flared Thursday, with Agriculture Commissioner Nikki Fried saying she has requested an FBI investigation into the issue and Florida Senate Minority Leader Gary Farmer asking the U.S. Department of Justice to probe “potential wrongdoing” by the Republican governor.

The vaccines have become a flashpoint after reports that shots have been made available to seniors in wealthy neighborhoods and have been linked with campaign contributions to DeSantis — reports that the Governor disputes.

Thursday’s volley came on the heels of a Miami Herald report that said members of the Ocean Reef Club, an exclusive enclave in Key Largo, received first doses by Jan. 22, when many seniors in Florida were still scrambling to sign up for shots.

Fried, who is considering a run for Governor against DeSantis next year, pointed to prior reports that vaccines were made available at “pop-up” vaccination sites in other Florida communities, including in Manatee County, that had ties to Republican donors.

“The fact pattern is simply just too clear to avoid. Give campaign-contribution big dollars, and get special access to vaccines, ahead of seniors and ahead of our teachers,” Fried, a lawyer who is the only statewide elected Democrat, told reporters on Thursday. “If this isn’t public corruption, I don’t know what is. I know we will get to the bottom of this. I am asking the FBI Public Corruption Unit to be investigating this.”

Fried also accused the governor of politicizing the shots.

“I will not stand by and let our vaccines be used as political gain and to be auctioned to the highest bidders while so many of our Floridians are suffering,” she said.

But DeSantis, who has touted making a priority of vaccinating Floridians ages 65 and older, laughed off allegations of wrongdoing.

“Total politics. We’re really proud of being able to do vaccines in almost every way imaginable,” DeSantis told a reporter after a news conference in Sebring, where he announced an effort to boost distribution of vaccines in rural areas.

The state has worked with hospitals, health departments and churches to speed up distribution of the vaccines, the Governor said.

“Any way we can figure out a way to get seniors shots, we’ve done it. We’re proud of the record. I think to criticize certain seniors for getting shots, I think is a huge mistake. I think it’s wrong to demonize seniors. I stand with the seniors. Seniors first,” he said.

DeSantis also took heat after announcing in early January that Publix pharmacies in certain areas of the state would offer the shots. The Florida-based grocery chain contributed $100,000 to DeSantis re-election effort in December, his committee records show.

While DeSantis makes appearances across the state to promote his policies, Democrats have lambasted the governor for the vaccine rollout and a distribution effort they say has given short shrift to Blacks, farmworkers and teachers.

In his letter to Acting U.S. Attorney General Monte Wilkinson, Farmer noted “several well-documented reports of exclusive vaccination sites that limited access to paying members of private clubs and residents of affluent gated communities.” The sites “have been preceded with or followed by substantial contributions” to DeSantis’ political committee. The committee received $2.7 million in February, as DeSantis gears up for his 2022 re-election campaign.

“The prioritization of the wealthy and affluent for vaccinations is morally reprehensible in its own right, but the exchange of hard-to-get vaccines for political contributions is nothing short of criminal,” Farmer, a Lighthouse Point lawyer, wrote.

But DeSantis called the Herald report about Ocean Reef a “train wreck,” saying he had no control over where those shots landed. He said a South Florida hospital was responsible for inoculating seniors at the time.

“I want seniors to get shots, and I think they did a great job doing that. We just weren’t involved with that in any way, shape or form,” he told reporters Thursday in Crystal River. “If you are 65 and up, I am not worried about your income bracket. I am worried about your age bracket, because it’s the age and not the income that shows the risk. So, if they were able to go into a community that is heavily senior and vaccinate people, that is very, very good. So, for that article to suggest that somehow that was one of our sites, that is just factually wrong.”

The Democratic Governors Association also stepped into the fray on Thursday.

“Ron DeSantis’ administration reeks of corruption,” association spokeswoman Christina Amestoy said in a news release. “While health care workers and vulnerable Floridians were patiently waiting their turn, DeSantis was selling their vaccines to the highest bidder. Let’s call this what it is: bribery, plain and simple.”