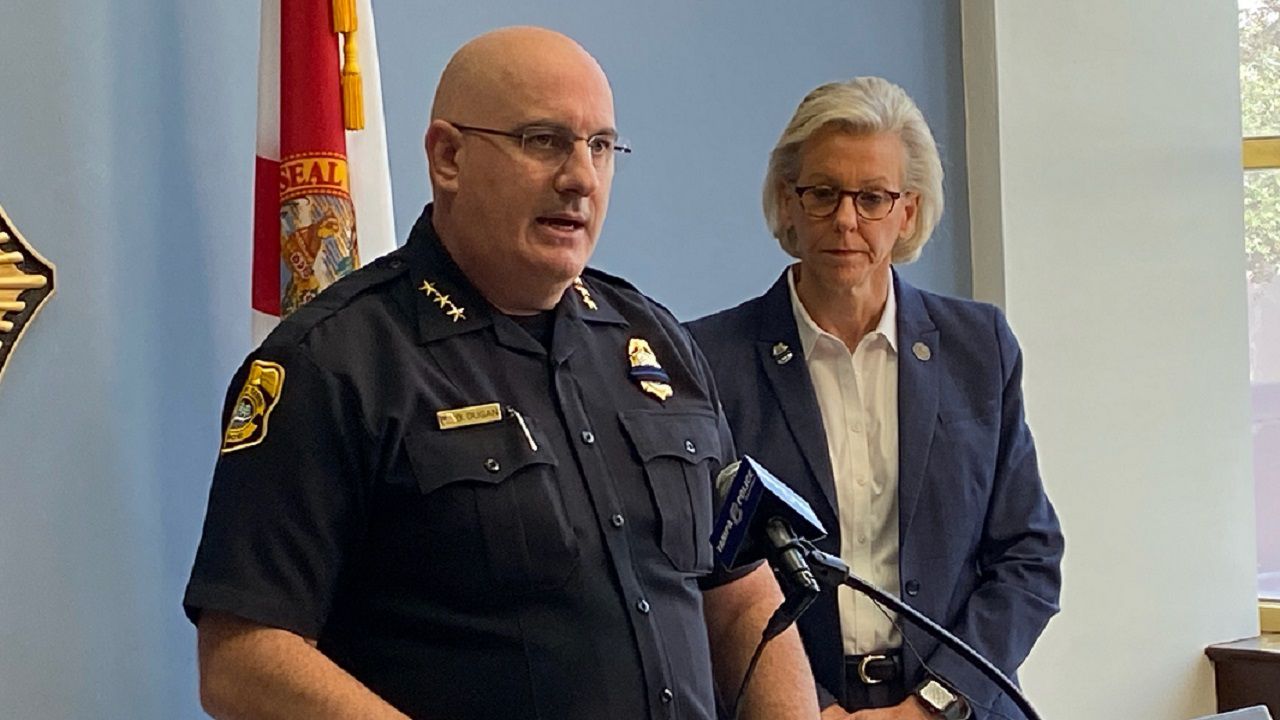 'Have we done everything right? Of course not.'

After less than four years in his position, Tampa Police Chief Brian Dugan announced he will retire on Sept. 10.

At a press conference Monday morning, Dugan made the announcement alongside Mayor Jane Castor, who also served as the chief of police from 2009 to 2015.

“It’s been an honor of a lifetime to help lead this department, to serve and protect our great community,” said Dugan. “I am so proud to wear the uniform of the Tampa Police officer.”

During the press conference, Dugan listed off a few things he considered achievements, like the Buccaneers winning a Super Bowl, catching a suspect in the Seminole Heights serial killings, and his department’s reaction to the near-weekly civil rights protests in 2020.

After Chief Eric Ward’s departure in 2017, Dugan was appointed interim chief by former Tampa Mayor Bob Buckhorn and was at the helm when the Seminole Heights serial killer suspect was arrested after a McDonald’s employee cracked the case.

In the years that followed, specifically from 2017 to 2019, Dugan’s department witnessed a 24% increase in use of force during arrests, and a 223% increase in the use of chemical agents.  Last year, TPD also saw significant increases in use of force, including a 28% increase in officers pointing their guns at people.

Under Dugan, despite criticism and calls for reduced funding, last year TPD’s budget grew by $13 million, or 8.6% for the fiscal year of 2021, which was the highest of any major metro in the country.

Over the last year of protests, Dugan consistently lamented to the press that his job was hard and that the morale at his department was low.

A few days later, Dugan went on “Fox & Friends” and said his officers were ambushed at a large gathering in V.M. Ybor. “This incident, we actually sent nine officers and it was clearly just a setup to get the cops there and then surround them,” said Dugan, while aerial footage of the incident played on another screen. “But this is what we’re dealing with, are these block parties or are they demonstrations? You know, what are they?”

However, noise complaints compiled by Creative Loafing Tampa Bay found that the department knew it was an ongoing block party that started as far back as January of 2020.

In August, a highly controversial “Bock the Blub” mural was painted in front of Tampa Police headquarters after pro-police supporters illegally blocked off a road and failed to obtain a permit. The mural is still there.

“Have we done everything right? Of course not,” said Dugan during today’s press conference. “No one ever does. What we have done, we dedicate ourselves to doing things the right way, always improving and always protecting this wonderful community.”

For a while, Dugan himself laid low until real reform almost came to Tampa’s embattled citizens review board.

Castor, a longtime friend and supporter of Dugan, had nothing but kind words during his retirement announcement.

“​​There are many police chiefs, I know in the Tampa Bay area and I would submit nationwide that have had to lead through some of the incidents that Chief Dugan has led through, and I’ll go through a couple in descending order to deal with a serial killer, you know, to have to deal with that 24 hours a day seven days a week, not knowing when the next strike is going to occur is probably more than any one individual could endure,” Castor said. “Having a hurricane, having to deal with the pandemic. The civil unrest. The increase in violent crime that we have seen around the nation. Any one of those incidents would try the abilities of a chief of police.”

Dugan, who has been in law enforcement for 31 years, said it was his decision to retire, but did not give a specific reason. He also stated that he’s looking for a job.

“I have a LinkedIn account for a way for someone to find me,” joked Dugan.

As of now, Castor says Assistant Chief Ruben “Butch” Delgado will step up as acting chief, while the city conducts a nationwide search.

“It’s been a rough 18 months,” said Dugan. “I’m really proud of the fact that we have improved our transparency. We have a very good relationship with the community, but like a marriage, your relationship with communities is an ongoing thing.”

previousLast Call for 7.26.21 — A prime-time read of what’s going down in Florida politics