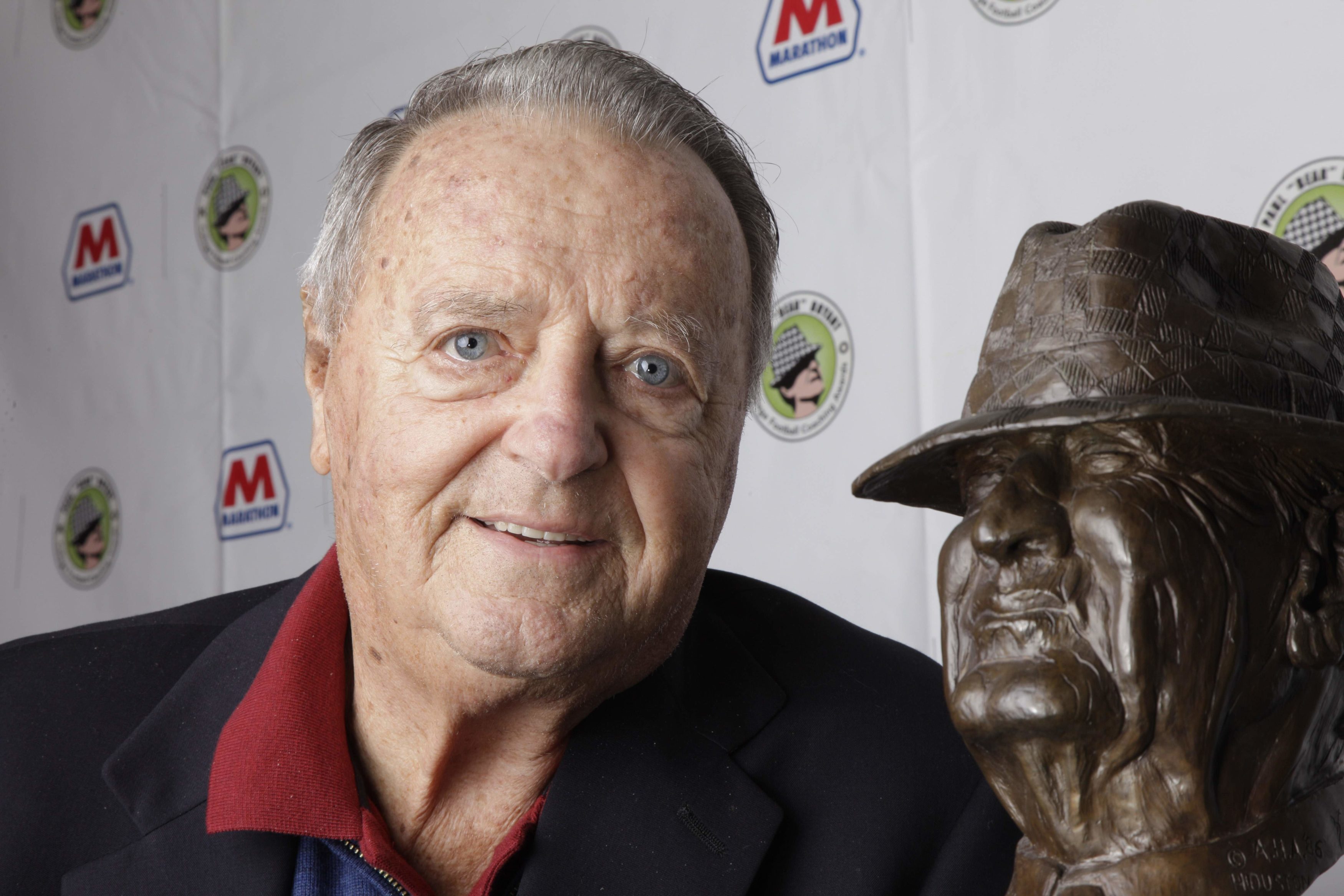 Bowden had been sick since last fall.

Bobby Bowden, the folksy Hall of Fame coach who won more than 350 games and built Florida State into one of college football’s great dynasties with two national championships has died. He was 91.

Bobby’s son, Terry, confirmed to The Associated Press that his father died at home in Tallahassee, Florida, surrounded by family early Sunday morning.

“It was truly peaceful,” Terry Bowden said in a text message to AP.

Bobby Bowden announced on July 21 he had a terminal illness that Terry Bowden later said was pancreatic cancer.

Florida State had an unmatched run of 14 consecutive seasons (1987-2000) finishing ranked in the top five of The Associated Press college football poll under Bowden.

Bowden retired following the 2009 season with a Gator Bowl win over West Virginia in Florida State’s 28th straight postseason appearance, a victory that gave him his 33rd consecutive winning season. However, a month after he resigned, the NCAA stripped Florida State of victories in 10 sports because of an academic cheating scandal in 2006 and ’07 involving 61 athletes.

Bowden was replaced in 2010 by his offensive coordinator, Jimbo Fisher, who had been Bowden’s replacement-in-waiting.

The Seminoles were a contender to win the title every season for more than a decade. Florida State lost national championship games against Florida, Tennessee and Oklahoma and narrowly missed out on the playing for titles in several other seasons because of losses to archrival Miami.

Bowden once quipped that his headstone would read, “But he played Miami,” a one-liner that came the day after the Hurricanes escaped with a 17-16 win in 1991 when the Seminoles missed a field goal wide right in the final seconds. Miami also won in similar fashion in 2002 when a field-goal try went wide left, much to Bowden’s chagrin.

Both coaches who birthed college football powerhouses in Florida during the 1980s have died this year. Howard Schnellenberger, who led Miami to its first national championship in 1983, died in March at 87.

Florida State dominated the ACC under Bowden, winning championships in 12 of its first 14 seasons after joining the league in 1992.

Bowden was also the patriarch of college football’s most colorful coaching family. Son Tommy Bowden had a 90-49 record at Tulane and Clemson, and son Terry Bowden was 47-17-1 at Auburn. Another son, Jeff, served 13 years coaching wide receivers for his father at Florida State and six seasons as offensive coordinator before he resigned in 2006.

Jeff Bowden’s time at Florida State was rocky and emblematic of the program’s fall off in the early 2000s. Florida State’s offense had slumped to its lowest production in a quarter century and Jeff Bowden was paid $537,500 to resign by boosters.

Bobby Bowden left West Virginia to take over a Florida State program in 1976 that had produced just four wins the three previous seasons. The Seminoles went 5-6 in Bowden’s first year and never again experienced a losing season under a man who said he prepared for football games like World War II generals prepared for battles.

“You face similar tasks of motivation, preparation, teamwork, discipline,” Bowden said. “I probably get the most satisfaction out of putting in the strategies and watching them play out.”

By 1979, Bowden had Florida State positioned for one of the great runs in the annals of college football.

Led by All American nose guard Ron Simmons, the Seminoles enjoyed an 11-0 regular season but lost to Oklahoma in the Orange Bowl. In 1993, despite a late slip at Notre Dame, Florida State won its first national title after nearly getting there in 1987, 1988, 1991 and 1992.

Bowden’s lone perfect season came in 1999 when the Seminoles became the first team to go wire-to-wire in The Associated Press rankings, No. 1 from the preseason to finish.

“The first championship was more of a relief,” Bowden said. “I think I was able to enjoy the second one a little more.”

Success also brought a glaring spotlight and Bowden’s program was touched by scandal on a few occasions. The school was put on NCAA probation for five years after several players in 1993 accepted free shoes and other sporting goods from a local store. The episode led former Florida coach Steve Spurrier to dub FSU “Free Shoes University.”

Bowden prided himself on adapting to the times and giving players a second chance, but critics said he was soft on discipline with an eye on winning games.

“If short hair and good manners won football games, Army and Navy would play for the national championship every year,” Bowden retorted.

Randy Moss, one of the most talented athletes to attend Florida State, never played a down for the Seminoles and was kicked out of school after a redshirt season for smoking marijuana. In 1999, Warrick was caught in a shopping scam that led to his suspension for two games and probably cost him the Heisman Trophy that year.

“There’s only about 6 inches that turns that halo into a noose,” Bowden was fond of saying during the good days, when he was often called “Saint Bobby” by the Florida State faithful.

The cheating scandal that led to the loss of a dozen wins from Bowden’s final resume took place in an online music history course from the fall of 2006 through summer 2007. The NCAA said some athletes were provided with answers to exams and in some cases, had papers typed for them.

Despite those tough days near the end of his career, Bowden stayed in the public eye after retirement, writing a book, making speeches and going public with his treatment for prostate cancer in 2007. His fear of retiring from coaching resulted in part from the death of his longtime idol, former Alabama coach Paul “Bear” Bryant, who died within weeks of leaving the sidelines.

“After you retire, there’s only one big event left,” Bowden frequently said.

Bowden stayed active into his 80s, finally slowing down over the last year or so. He was hospitalized in October 2020 after testing positive for COVID-19. The test came a few days after he returned home from a long hospital stay for a leg infection.

Born Nov. 8, 1929, in Birmingham, Alabama, Robert Cleckler Bowden overcame rheumatic fever as a child to quarterback Woodlawn High School in Birmingham, then attended Alabama for a semester before transferring back to his hometown Howard University, where he starred at quarterback.

He married child his childhood sweetheart, Ann, and they stayed together for 72 years.

Bowden built the Florida State program by scheduling the toughest opponents he could find, and he’d play them anywhere, usually at their stadium. He was dubbed “King of the Road” in 1981 after playing consecutive road games at Nebraska, Ohio State, Notre Dame, Pittsburgh and LSU — and winning three of the five.

His daring play-calling also earned him the nickname Riverboat Gambler in some quarters. Bowden’s most famous trick play came in 1988 at Clemson. He sent his punt team onto the field with 1:33 left in a tie game with a fourth-and-4 and the ball at Florida State’s 21. Florida State’s punter leaped high into the air and acted as if he were chasing down a high snap while the upback took the ball and slipped it between his legs where LeRoy Butler grabbed it and raced 78 yards to the Clemson 1 to set up the winning field goal.

“We were determined somebody was going to win that game,” Bowden said after the “Puntrooskie.”

Through Bowden’s career, Florida State won games in many of the nation’s toughest stadiums, including at Michigan, Southern California and, of course, rivals Florida and Miami. In 1987, the Seminoles crushed Big Ten champion Michigan State 31-3 at East Lansing and whipped Southeastern Conference champion Auburn on its home field, 34-6.

Bowden also was considered one of the best handlers of great individual talents, recruiting and developing the likes of Simmons, Ward, Weinke, Warrick, Butler and Deion Sanders, who earned the nickname “Prime Time” during his days as a Seminole.

“God bless the Bowden Family, Friends & Loved ones,” Sanders posted on Twitter. “My Prayers are with u. I’ve lost 1 of the best coaches I’ve ever had.”

Florida State’s recruiting classes were nearly always among the top nationally. By the 1990s, the Seminoles poured star talent into the NFL on an annual basis, including four of the top 19 picks in the 2006 draft the same year Bowden was elected to the College Football Hall of Fame.