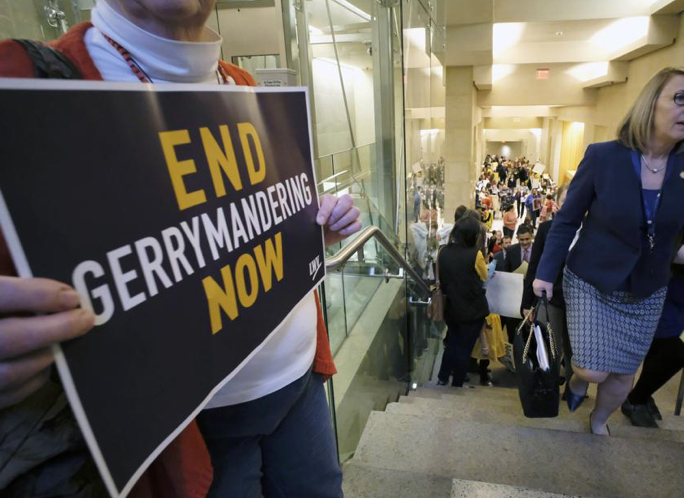 Pledging end to gerrymandering only fair if both parties do it.

Democrats argue that the once-a-decade process of redrawing political maps shouldn’t be a partisan cage match. In the name of good government and balance, they’ve pushed for independent commissions to do the work of rebalancing population changes into congressional districts.

They’re about to feel the consequences of their focus on fairness.

In Democratic-controlled Colorado, Virginia and Oregon, new congressional maps drawn by commissions or bipartisan power-sharing agreements are unlikely to give the party the sort of political advantages it could have otherwise enjoyed.

Republicans, meanwhile, haven’t given up their power, controlling the process in 20 states, including Florida, Texas and North Carolina.

The imbalance could come with major consequences. Democrats currently control the House of Representatives by just an eight-seat margin. Choosing not to seize advantages in redistricting could cost Democrats the House.

“There should be concern within the Democratic Party that we may have been too quick to seek reform without really looking at the long-term implications,” said Rick Ridder, a Democratic strategist in Denver.

But given the narrow margins, the commission states matter. In Colorado, where President Joe Biden won by 13 percentage points last year, the nonpartisan commission released a preliminary map on Friday which could lead the two parties to evenly split the state’s eight congressional seats. In contrast, some Democratic maps split 6-2 in their favor. The difference, a net of four congressional seats, is half the current Democratic margin in the House.

In Virginia, where Democrats control the legislature and hold the governor’s office, party leaders are worried the bipartisan commission could deadlock, kicking control of redistricting to the state Supreme Court, dominated by GOP-appointed judges. The court would likely hire experts to draw the maps determining the political composition of the state’s 11 congressional districts and its state legislative seats.

And in Oregon, a solidly blue state that is gaining a congressional seat, the Democrats who control a supermajority in the state legislature agreed to evenly divide their redistricting committee between Democrats and Republicans.

On Friday, the two parties released dueling maps for the state. The Democratic map shores up one swing district represented by Democratic Rep. Peter DeFazio by pulling in more voters of his party, and creates a safe Democratic district west of Portland for Oregon’s sixth and newest district. The Republican version keeps both districts competitive. A deadlock kicks the process to the Democratic secretary of state.

Good government advocates have long argued for nonpartisan commissions to oversee redistricting to end gerrymandering, the centuries-old practice of drawing districts designed to pack opponents’ voters into one place, or scatter them across districts to minimize their voting power. The practice shrinks the number of competitive districts, hardening partisan polarization, and can blunt the political power of some racial and ethnic groups.

Republicans argue that both parties gerrymander. Democratic worries about the Colorado and Virginia commissions expose the party’s hypocrisy, said Adam Kincaid, executive director of the National Republican Redistricting Trust, which oversees line-drawing for the GOP. “It’s as if they see these commissions as an extension of the Democratic Party and not as the fair-minded independent bodies they say they are.”

“Republicans know they are out of step with where this country is going and growing, which is why they have to manipulate the maps and the voting laws in order to win,” Burton said. “Trusting the voters and supporting maps that fairly and accurately represent the communities of this country is a sign of strength, not a sign of weakness.”

Democrats have proposed requiring nonpartisan commissions to draw lines in every state as part of a sweeping federal election bill, which is stalled in the Senate due to unanimous Republican opposition.

Currently, 10 states have redistricting commissions that draw lines for congressional districts, including reliably Republican Montana and swing state Arizona, where the GOP would otherwise control the process.

However, six of the commission states are ones whose governments are controlled by Democrats, including the nation’s biggest state, California, with its 52 congressional seats. That’s part of the reason the GOP controls the redistricting process in states representing 187 congressional seats, and Democrats in ones with only 75 seats.

In Michigan, where Republicans aggressively gerrymandered when they had full control of state government in 2010, groups with ties to Democrats in 2018 pushed a ballot measure taking the pen from the GOP legislature and giving it to a nonpartisan commission.

In Virginia, when Republicans controlled the state legislature in 2019, Democrats in that body voted to put a commission measure on the ballot. The following year, after Democrats took control of the legislature, only some Democrats took the required second vote to place the measure before voters, now aided enthusiastically by out-of-power Republicans.

The initiative passed overwhelmingly in November of 2020, as voters handed Biden a 10 percentage point win.

Half of the commission’s 16 members are state legislators. If the commission formally deadlocks, the state Supreme Court draws the maps, a prospect that alarms Democrats given its lack of progress so far.

“We have made a mistake,” said Lashrecse Aird, a Democratic delegate who voted against the measure both times it came up in the state legislature.

In Colorado, Democrats in 2018 backed a ballot measure to hand control of redistricting to a nonpartisan commission that does not include legislators. The initiative was first proposed by a wealthy businessman and former Republican. Some Democrats signed on enthusiastically, others grudgingly, but eventually the party threw its full backing behind it.

But the commission’s maps, though inching the way Democrats have lobbied for, still leave the state as something of a tossup. Under the latest version, the state’s 4-3 split would be preserved and a new seat would appear in Denver’s northern suburbs encompassing an area that voted Democratic by only 1.9 percentage points in 2020. Strategists acknowledge that seat could easily fall into Republican hands during a bad election cycle — like they may face next year.

“This looks like a 4-3-1 map in a state that went for Biden by 13.5,” said Craig Hughes, a veteran Colorado Democratic strategist. “That’s not a good result for Democrats.”

Some Democrats have been grumbling that the party erred in backing the commission.

“I give Republicans a lot of credit — they play a ball game and if they lose they change the rules,” said Wellington Webb, a former Denver mayor who has objected to using the commission. “Democrats, we normally always fall on the category of let’s be fair.”

Republicans have disagreed with some of the maps, but will be thrilled if the state’s House districts stay relatively evenly split.

“As Republicans, we will look at that as a gift from the gods,” Greg Brophy, a former GOP state lawmaker involved in a group lobbying the commission, said, “because we didn’t deserve this.”