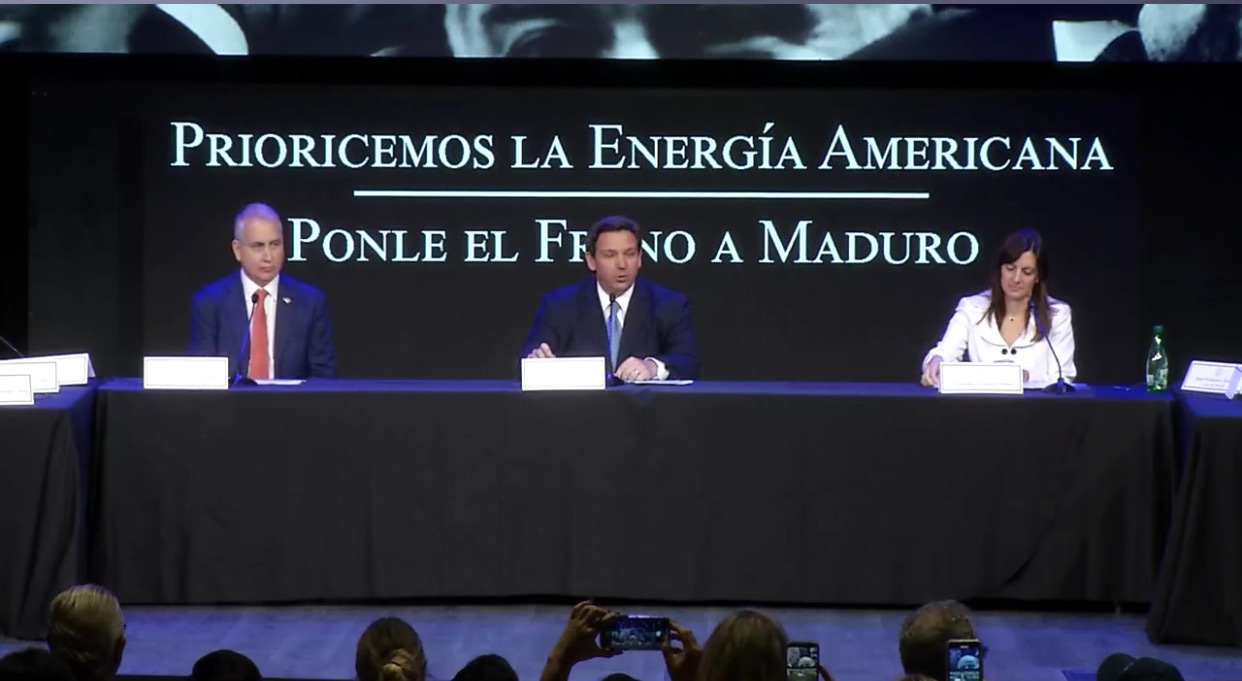 'Biden's answer is to prop up Maduro. So we're saying here today: No.'

The messaging comes as the White House has opened up talks with the Nicolás Maduro regime, apparently forsaking Juan Guaidó in the process. DeSantis offered support to the opposition leader as the “legitimate leader” of the country in 2019, when he was recognized by the U.S. as the rightful President of the country.

However, even before the end of the Donald Trump administration, it was clear American support for Guaidó only went so far, with Trump reportedly exploring dialogue with Maduro in 2020.

“There was a time when we thought there was imminent change. It just didn’t get there,” DeSantis said.

The Governor and Lieutenant Governor participated in a roundtable at the Jesus Worship Center, along with a U.S. Congressman and a number of other people who agreed with their position, an easy sell in South Florida where many residents moved to escape Latin American socialism.

The graphic behind them was unambiguous: “Expand American Energy: Don’t Line Maduro’s pockets.” And the rhetoric was equally forceful.

“This is unfortunately something that has become a pattern with the Biden administration,” DeSantis said, which is “thumbing its nose” at Floridians with these “hat-in-hand” negotiations “legitimizing” Maduro.

“They’re trying to figure out an easy way out of this,” DeSantis said of soaring energy costs.

“I believe that this country should be energy independent,” DeSantis added, hewing to Republican catechism regarding gas price hikes during the current administration.

“We could end up with five-, six-dollar gas before you even know it,” DeSantis said. “Part of the reason we’re in this situation is that the Biden administration has a policy of kneecapping the energy industry.”

“Now we’re in a situation where people are really, really hurting,” DeSantis said, warning that oil deals with “the Ayatollah” in Iran may be coming amid the push to wean America off Russian oil imports.

“Don’t turn around and go to Maduro, who has committed all kinds of atrocities,” DeSantis advised.

“What the Biden administration is doing is turning back the clock after the Trump administration,” DeSantis said, maligning the move as a “mistake” that won’t solve the energy shortfall.

“If you look at what’s going on with Russia and Ukraine, hitting Putin in energy …. the only way to hit Putin is to take away his lifeblood which is the energy revenue,” DeSantis said, noting Europe has “helped to empower” Putin by buying his energy and shirking its NATO commitments.

DeSantis continued throughout the roundtable to castigate the “weak” Biden administration and its “inept policies,” messaging that has proven to be a recurrent refrain for DeSantis since last January.

Lt. Gov. Nunez made similar points, saying it was “clear” she and DeSantis stood with Venezuelans in pursuit of democracy.

Rep. Mario Díaz-Balart, who has been pivotal in opposition to Venezuelan rapprochement, made similar points, saying Biden was “betraying” Venezuela in a way not seen since President John Kennedy “betrayed” Cuban freedom fighters.

“We will not ever forget,” said the Republican from Florida’s 25th Congressional District.

previousWith Medicaid rebid on the horizon, the time to act is now