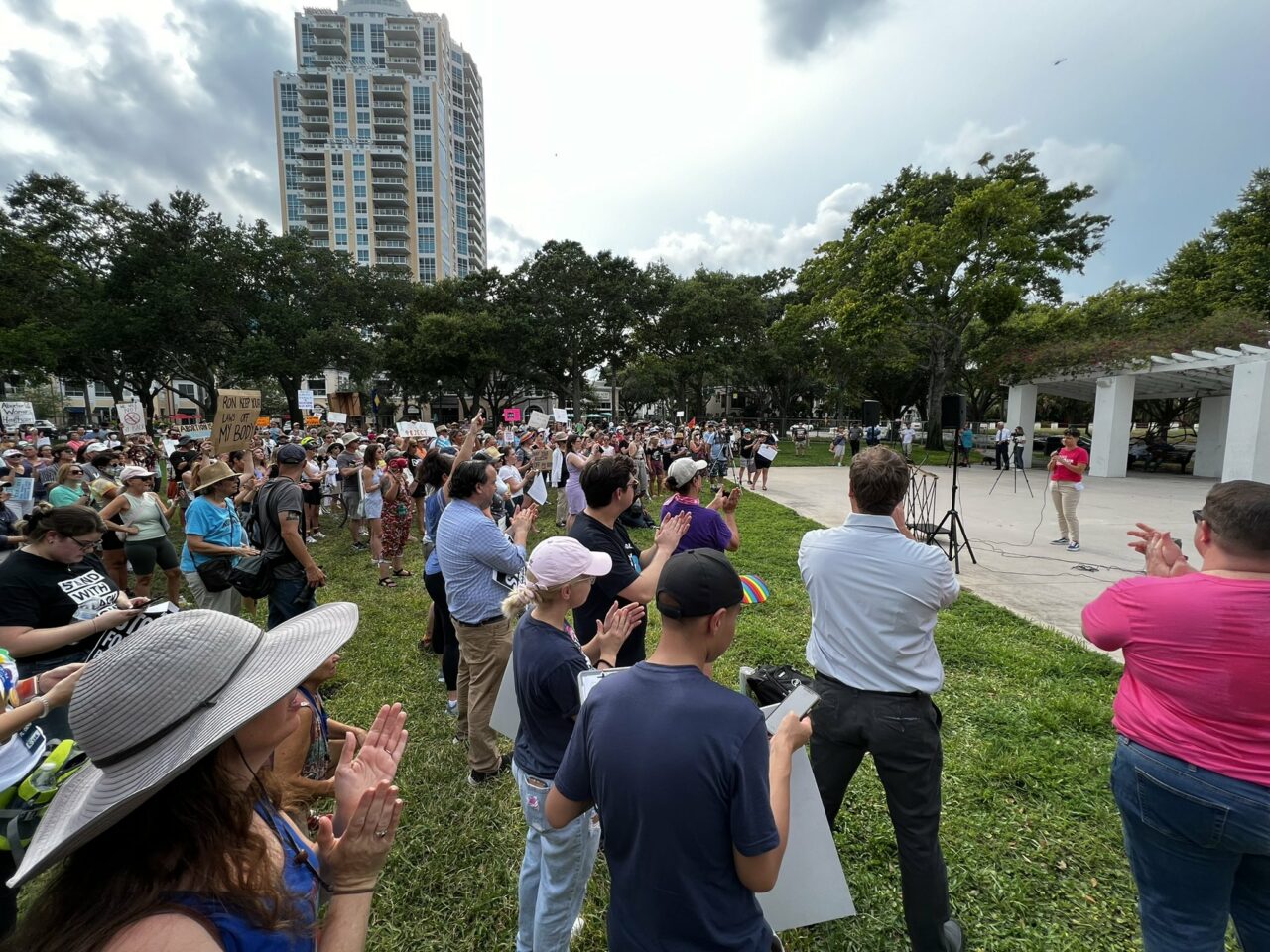 Within an hour of the Supreme Court ruling, Progress Florida announced a rally in St. Petersburg for a “Bans Off Our Bodies” protest.

The Supreme Court has nullified constitutional protections for abortion rights in a decision reached Friday, reversing precedent that has been in place for nearly 50 years.

The court’s conservative majority overturned Roe v. Wade as an outcome from Dobbs v. Jackson. The ruling is expected to lead to abortion bans in roughly half the states.

Tampa Bay politicians have been vocal about the ruling in both opposition and support. Within an hour of the Supreme Court ruling, Progress Florida announced a rally in St. Petersburg for a “Bans Off Our Bodies” protest that afternoon. A slew of elected officials, including U.S. Rep. Charlie Crist and St. Pete Mayor Ken Welch, attended the protest.

Here’s how Tampa Bay politicians are reacting to the ruling:

U.S. Rep. Kathy Castor, a member of the House Pro-Choice Caucus, marched outside of the Supreme Court Friday in opposition after the news broke.

Ripping away our rights and freedoms is un-American – and this decision is downright dangerous. For over fifty years, women across America have had the right to make personal health care decisions with their doctors and their families. Today, the Supreme Court and the extremists who built this court majority are compromising the health, safety and economic well being of women and families. Women, families and their doctors – not politicians – should determine the timing of childbirth, make their own personal reproductive health decisions and choose their pathways in life.

“Neighbors across Florida are rightfully worried about what today’s decision means for them – Governor DeSantis and Republican legislators already have issued a costly and cruel restrictive abortion ban in the state that is illegal under the right to privacy under our state constitution. Repealing Roe v Wade affects more than just abortion care – it impacts the work and funding of health providers that people in communities across the country depend on. We need to ensure that all people have access to the quality care they need, including birth control, abortion care, prenatal care and parenting support.

“While today’s decision will be devastating for Floridians, especially our neighbors of color, I will not rest until we make Roe a law and ensure birth control remains available and affordable.

Eric Lynn, the Democratic nominee in the race for Florida’s 13th Congressional District, attended Progress Florida’s “Ban Off Our Bodies” march in St. Pete. In addition to protesting, Lynn tweeted:

50 years of precedent, 50 years of freedom for Women’s reproductive health GONE. We cannot accept this, we must pass federal law codifying ROE. That’s why I’m running: to protect the views of the majority of Americans in our democracy!

The people of Pinellas made it clear that we’re not going to let SCOTUS takeaway a woman’s freedom to choose without a fight. We’re going to keep this energy through November, and make those who oppose the American majority’s view pay at the ballot box! #VoteforChoice pic.twitter.com/KK0ErSchMc

As a member of Congress, I will always support and protect the lives of the unborn, and am proud to be pro-life. With today’s decision #LifeWins!!

History is being made right before our eyes. President Trump’s appointments to the Supreme Court have saved many innocent lives. Thank you 45!

We must stand FIRM in protecting the lives of the unborn. I will continue to fight for the pro-life movement and those that fight to protect the sanctity of life every single day.

I’m eternally grateful to the justices who finally corrected the disastrous decision that has resulted in the violent ending of the lives of more than 63 million babies since 1973. Today’s decision marks a watershed in the protection of the unborn and we look forward to the states moving speedily to advance further protections. We also press Washington to set policies to enable more American families to readily adopt these children.

This reduction of rights is not an abstract decision that only impacts a few people. On the contrary, nearly one in four American women will have an abortion in their lives, so there is a high likelihood that everyone in Florida knows and loves someone who has made this very personal decision.

History has shown us that abortions cannot be prevented by simply banning them. All bans do is make it harder to get a safe, legal abortion, and they lead to what we saw in decades past: illnesses and death because of unsafe, underground abortions. If radically conservative legislators truly want to reduce the number of abortions taking place, we should focus on strengthening appropriate sex education, making sure that contraception is easily available to anyone who needs it, and protecting programs that support the health and well-being of families.

So while extremist judges have cleared the way, it is this same Republican-controlled state government leading us down the path of repression.

We cannot quietly accept the suppression we’re facing. We have to speak up before they take away even the right to speak out against them.

The Supreme Court decision today effectively overturns Roe v. Wade and peels back federal protections. Here in Florida, the laws would default to the abortion ban passed recently which doesn’t make exceptions even for incest or rape.

Today is a powerful reminder that elections have consequences and the role that we all play in strengthening our democracy.

Millions of women lost a fundamental constitutional protection today despite these protections being overwhelmingly supported by a majority of Americans.

I am committed to doing everything in my power to reverse the harm this decision has caused and to fight for people’s right to access safe abortions.

BREAKING! The Supreme Court has overturned Roe v. Wade in a historic decision. This is a victory for state’s rights and millions of unborn lives.

We can’t sugar coat this: the decision today had real life consequences on a person’s access to reproductive healthcare. Today we protest, shout, and march. Tomorrow, we organize. Monday, we take action. November, we vote.

Our rights have been taken away. Full stop. There is no spin, no argument against the simple fact that Americans today have fewer freedoms than they did yesterday. With the Supreme Court’s decision this morning to overturn Roe v. Wade, millions of women will suffer, and millions of American families will struggle with sudden government intrusion into their private medical decisions.

Make no mistake. Republicans in Tallahassee will use this terrible ruling to further restrict the rights of Floridians by stripping away basic freedoms and limiting their healthcare choices. Florida Republicans want to punish Floridians for exercising basic rights to medical care. In Pinellas County, we see the real problems facing everyday people – baby formula shortages, inflation and education funding getting ignored in favor of extreme abortion bans.

Now, we face the reality of girls growing up today with less freedom than their grandmothers. That is a reality I cannot abide by, and it’s why I’m running for the State House – to stand against rights-restricting legislation coming out of Tallahassee. When I’m elected, you know I’ll be an advocate for the women and families of Pinellas County that will be affected by today’s decision.”

Overturning #RoeVsWade is a striking down of a fundamental right for women to control their bodies. Women are still going to get abortions. But now, they’re not going to be safe and women are going to lose their lives. This is a major step back for women’s rights.

I’m extremely disappointed w/ the SCOTUS decision to overturn #RoevWade and roll the clock back 50yrs on women’s bodily autonomy and reproductive rights. It’s more important than ever to show up at the polls to elect leaders who will ensure reproductive rights are protected in FL