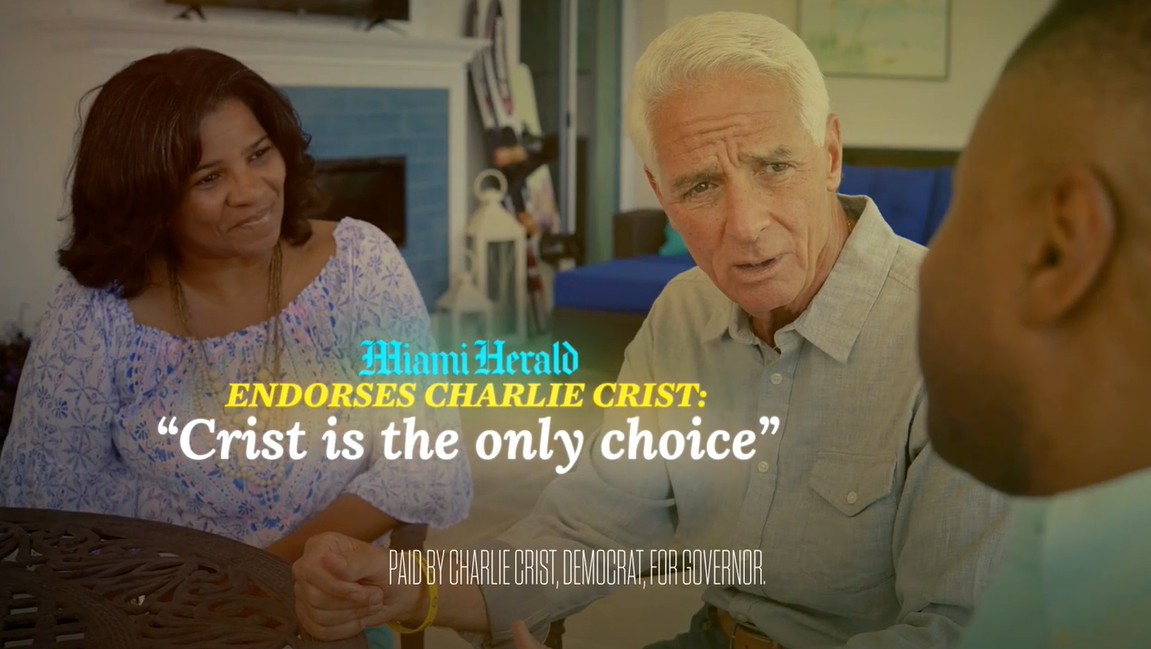 The ads say Crist can beat 'divider' Ron DeSantis, will stick up for abortion rights.

Charlie Crist’s closing pitch to become the Democratic gubernatorial nominee highlights how the state’s newspapers have chosen to endorse him and argues he is the best person to protect a woman’s right to choose.

The two 30-second ads will be running “in key media markets across the state,” a news release from the Crist campaign said.

Both ads hit in some way on two themes: Crist has the best chance of defeating “divider” Gov. Ron DeSantis, and Crist is the best person to defeat DeSantis’ plans to make abortion illegal.

As preserving abortion rights has appeared as a key motivator for Democratic voters, his chief rival for the Democratic nomination for Governor, Agriculture Commissioner Nikki Fried, has raised doubts about his record. Her campaign has highlighted an interview in which he declared himself “pro-life.” Crist must get by her to face DeSantis in the November election.

Fried’s characterization aside, three female leaders appear in “Endorsed” to explain how Crist is the best choice for preserving women’s rights after the Supreme Court’s June decision that greenlighted state efforts to restrict abortion.

“Charlie Crist is the only candidate for Governor who vetoed anti-abortion legislation,” said Democratic Rep. Anna Eskamani, as the advertisement begins with soft, serious piano music behind her.

Next up, Democratic Rep. Fentrice Driskell says, “He has a perfect pro-choice record with Planned Parenthood and NARAL,” both national abortion rights groups.

Barbara Zdravecky, former president of Planned Parenthood for Southwest and Central Florida, rounds out the testimonials.

“He stands with pro-choice leaders like me,” Zdravecky says.

The direct question of abortion rights drew the largest-ever Primary Election turnout in Kansas earlier this month to shoot down an attempt to severely restrict abortion access. And now, in this ad, Crist ties DeSantis to efforts to restrict abortion in Florida.

The state’s Republican-controlled Legislature last Session passed the state’s most restrictive anti-abortion law since Roe v. Wade made the procedure legal. The new law prohibits abortion after 15 weeks of pregnancy. And, after Roe v. Wade was overturned in June, DeSantis said the state would “expand pro-life protections,” although he hasn’t said what measures would be taken.

Crist, however, in the new ad, comes right out and says DeSantis wants to ban abortion.

“I’ll protect your choice,” Crist says in the ad, as his campaign logo comes up underneath the words, “The one person who can beat DeSantis.”

The second ad, “Newspapers,” features Crist’s editorial endorsements from around the state. All of Florida’s major newspapers, The Miami Herald, Tampa Bay Times, the Orlando Sentinel, The Palm Beach Post, the Sarasota Herald-Tribune and the Sun-Sentinel, have lauded his previous leadership and hailed him as the unifier the state needs.

But the abortion rights theme slips into this ad as well. An excerpt from The Palm Beach Post’s endorsement is showcased: “Crist has been a solid, pro-choice vote,” the newspaper is quoted as saying.