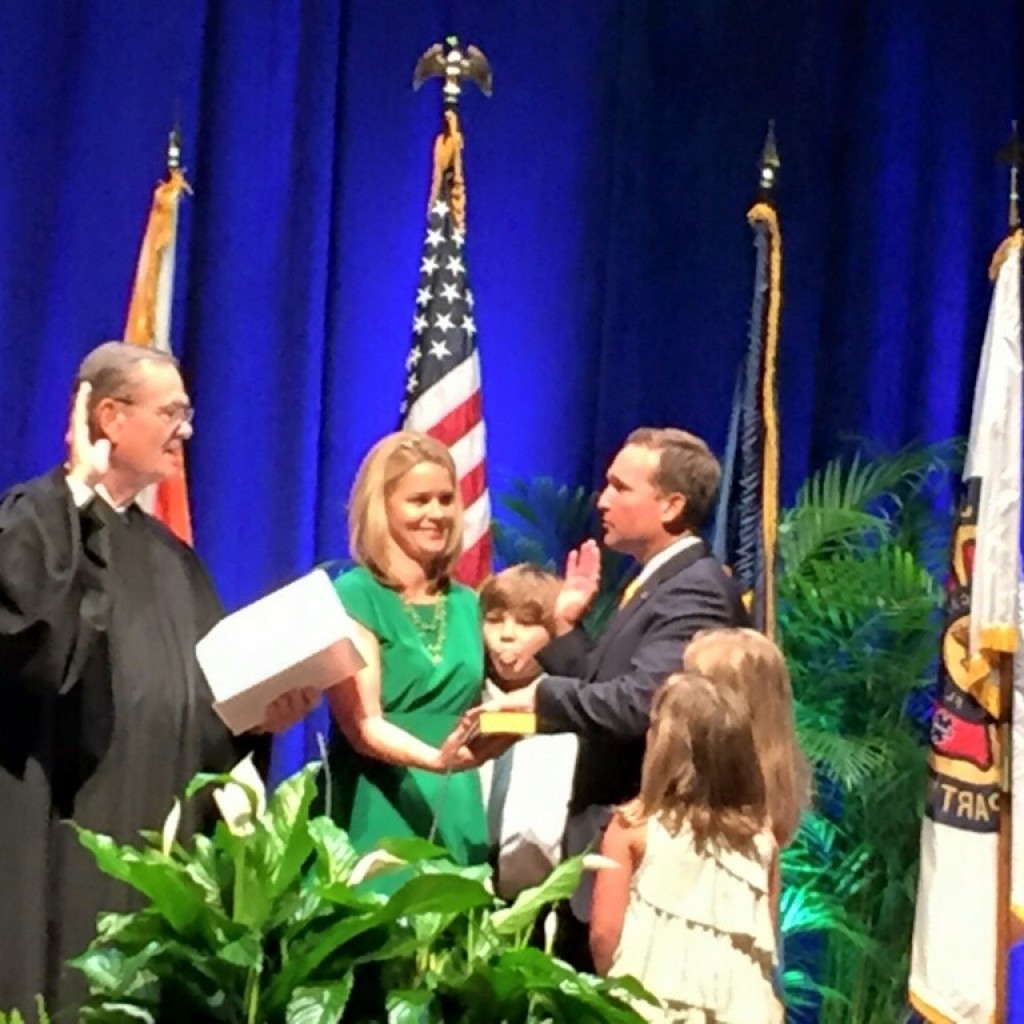 One City. One Jacksonville.

That was the theme Wednesday of the joint inauguration for Jacksonville Mayor Lenny Curry and Sheriff Mike Williams. Those with memories longer than one news cycle might see the inauguration theme as a variant on the theme of the #UniteJax event in April that gave the Duval GOP an avenue to coalesce around a slate of candidates, most of whom won in May.

As Curry said during his address, “the campaign is over. It’s been over for weeks.”

The goal of the inauguration event was to bring Jacksonville together. Certainly, every power broker in Jax was in attendance.

From Bill Bishop, John Rutherford and Wayne Wood to Karen Bowling, Peter Rummell and Abel Harding, everyone you would have heard of was there (except for certain Alvin Brown administration members who are taking much needed R&R). Michael Munz, so instrumental in the behind-the-scenes work of the Curry campaign, was there making sure that everything that needed to happen in fact happened. All the Council members you could want to see, both from the old class and the new class, was there. And lest we forget, Gov.Rick Scott was in the house also.

In her welcoming remarks, Debbie Buckland proclaimed Inauguration Day to be a “new day for Jacksonville.” The subsequent speakers all hit that theme hard.

Matt Connell, introducing the new sheriff, hit another recurrent theme: that of being “excited about this generation of leadership.”

The implicit argument, throughout the campaign, was that Curry and Williams were uniquely able to function as a package deal, as a generational shift, combining conservative pragmatism with a compassion not always associated with the brand. They are natural allies, in terms of age, temperament, demeanor, and background. And they’ve developed a real friendship, which came through early in Williams’ remarks.

“Lenny and I were talking in a room in the back,” Williams said about the leadup to the event, when they had a realization.

“This is going to happen whether we’re ready or not.”

Well, they were ready. Williams talked about his priorities, in his calm, understated way. About the need for a “thriving and robust law enforcement agency of the 21st century.” About his desire to renew a “commitment to transparency and training.” About the need to deal with helping offenders re-enter society, and the need to address “root causes of problems and challenges.” About his desire to build “pathways to peace” and to ensure that every child is safe in his or her own neighborhood.

Williams voiced his desire to make Jacksonville the safest city in the United States, and his commitment to community engagement to that effect comes from the heart.

“I am a son of Jacksonville,” Williams (a Bishop Kenny graduate just like this writer) said, and this is “home and I want it to be the safest place possible.”

From there, one of the most powerful speeches in recent memory in Jacksonville was delivered by the Rev. John Guns, in what the program called Words of Hope and Inspiration.

Guns turned it out, talking about what an “amazing day” this is, before launching into an explication of what “One City, One Jacksonville” means to him.

The slogan is more than a slogan; it is a “mantra of this collective,” designed to give pause to the corrosive rhetoric of “the cynic… the skeptic… the pessimist” who would stand athwart the mandate for change in this “proud, bold city” on this “new day of leadership.”

Jacksonville, in the reverend’s vision, will “commit to the spirit of unity” amidst a “culture of mutual respect.” And unity? It’s not a “buzzword,” but a call toward something greater, a “common vision,” a “driving force,” wrapped in a “garment of ethical love.”

Guns spoke of bridges, building the motif toward a triumphant call to the audience.

“We’re God’s children, and we will win,” said Guns, who proclaimed that this struggle was not about “color or class,” but is about “character and integrity.”

Mayor Curry, let’s ride! Mike Williams, let’s ride! The pastor went down the list, namechecking Angela Corey and Nikolai Vitti, and every “teacher, student, and parent” on the “Southside, Eastside, Northside, and Westside” to ride as “one family,” as “one city.”

Guns warmed the crowd up, getting ovations at many points in his remarks; he was followed up by another of Jacksonville’s leading African-American preachers, the Rev. Fred Newbill, who made a more restrained case for the work Curry and his team have done.

Newbill contended that Curry, a “man of change,” brings a “fresh look to the issues facing our city,” and is committed to working across party lines and to One Jacksonville, One City.

From there, there was little to do but swear in the new mayor, who gave a triumphant thumbs up that is more than familiar to those who have been paying attention. Then he took the mike and took Guns’ line: Let’s Ride!

Curry is a man who expresses gratitude naturally. He thanked the military and public safety officials, but the gratitude he expressed to his parents and his wife and children was worthy of specific notation.

To his parents, the mayor gave credit for teaching him integrity, and the lesson that “humility is not weakness,” and that living right involves “faith in God, not in man.”

Curry told me on the campaign trail that he writes his own speeches, and this came through when he spoke of his children as a proud father would: “these are my babies.” He then talked about the puppies he got for his children, as promised, after the campaign wrapped up.

And as any good parent would, he turned that into a teachable moment. Talking to his daughter Brooke about the feeling she had with her new dogs, the mayor said, “Brooke … that feeling is a fraction of what I felt on the day you three were born.”

“Elections are about the next generation,” Curry said, before thanking his wife for making him a “much better person in every aspect of life.”

Then he transitioned to a moment no one expected.

Pointing out that “the campaign was over weeks ago,” Curry directed everyone in the audience to hold the hand of the person next to them, and the mantra — One City, One Jacksonville — was again repeated.

“A simple gesture,” the mayor said, a “symbol of a powerful movement.”

Curry went on to discuss the “opportunity and the urgency” of the moment, how “people believe we can do great things” but that “four years will be gone in a blink of an eye.”

He addressed the need to address the violent crime and murder so familiar in local neighborhoods and on newscasts, and, in what turned out to be an applause line, the need for “every single person” in Jacksonville to be “treated with the honor and respect they deserve.”

That commitment extends especially to at-risk children, those from broken homes, those born into poverty, those who “see violence every day,” like the 10-year-old boy he met during the campaign in Grand Park, who was talking to the mayor about baseball before mentioning that he saw his best friend shot in the chest.

Some have said that Lenny Curry spent too much time in neighborhoods like Grand Park during the campaign. But having seen him before and after that event, what is clear is that outreach made him not just a better candidate, but infinitely expanded his ability to fulfill the mayoral vision he seeks to embody.

The “new way of thinking is about kids knowing that we love them,” Curry said. To that end, the mayor is “gonna get in the trenches” and “let kids know we love them unconditionally.”

The phrase Compassionate Conservatism comes to mind. That concept, so briefly embraced by George W. Bush before the run up to the Iraq War, was definitely in play here.

From there, Curry discussed another topic: “fiscal sanity.” He pledged a balanced budget to Council, quipping that “you may not agree with my priorities, but the budget will balance.”

Vowing that “we will solve these [problems] together,” Curry’s remarks closed, leading into a closing song: “A Change Is Going to Come.”

From there, exit music for the event played. “Fireworks” by Katy Perry; as one media wag joked, “Why not Katy Perry?”

I was able to speak with Williams and Curry both after the event.

A question I had for Williams was about budgetary priorities. Having sat in the Sam Mousa budget hearing with Undersheriff Pat Ivey, I know that the JSO has budget priorities. What would Williams’ be?

He told me that they had “so many 1 and 1A priorities,” describing the vehicle fleet as being in “terrible shape,” and the need for more officers in the street is equally pressing.

Williams expects movement on these issues in “the next couple of years.” Additionally, as part of his reform agenda, he’s looking around the country to see what other sheriff’s offices do.

Also important to Williams: getting raises for officers “this year or next year,” as compensation levels locally lag behind other metros in Florida for police officers.

My conversation with Curry, meanwhile, addressed the overt spirituality of the inaugural event. For the mayor, it comes back to his commitment to outreach and unifying the community.

He vowed, as he did in his remarks, to “spend time in the trenches, involved and engaged with at risk children” who “need to know we love and care about them.”

“Love can transform this city,” he added.

Indeed, that’s a statement that can apply across the board. On issues ranging from helping the socioeconomically disadvantaged improve their lots in life to finding a resolution to the Human Rights Ordinance issue, Curry is betting the house on a message that has an emotional resonance that he didn’t get credit for during the campaign.

For now, Curry and Williams are in the “honeymoon period,” and they have plenty of political capital. How will they use it? That’s the open question. But in terms of providing a mission statement for the emergence of Next Generation Leadership, Wednesday’s inauguration event was emphatic.

There was a similar optimism four years ago when Alvin Brown was elected, and one suspects that Curry and his inner circle learned from the positives and the setbacks of the Brown administration. What is clear is that Jacksonville demands an affirmative mission statement. And also demands the fulfillment of those promises.

Inauguration festivities continue Wednesday night at Jacksonville’s Art Walk, which includes an open house at City Hall hosted by Molly and Lenny Curry. We will be on hand covering this event, and getting the mayor’s thoughts.

Note: Thanks to the Jax Young Voters Coalition for use of the photo.