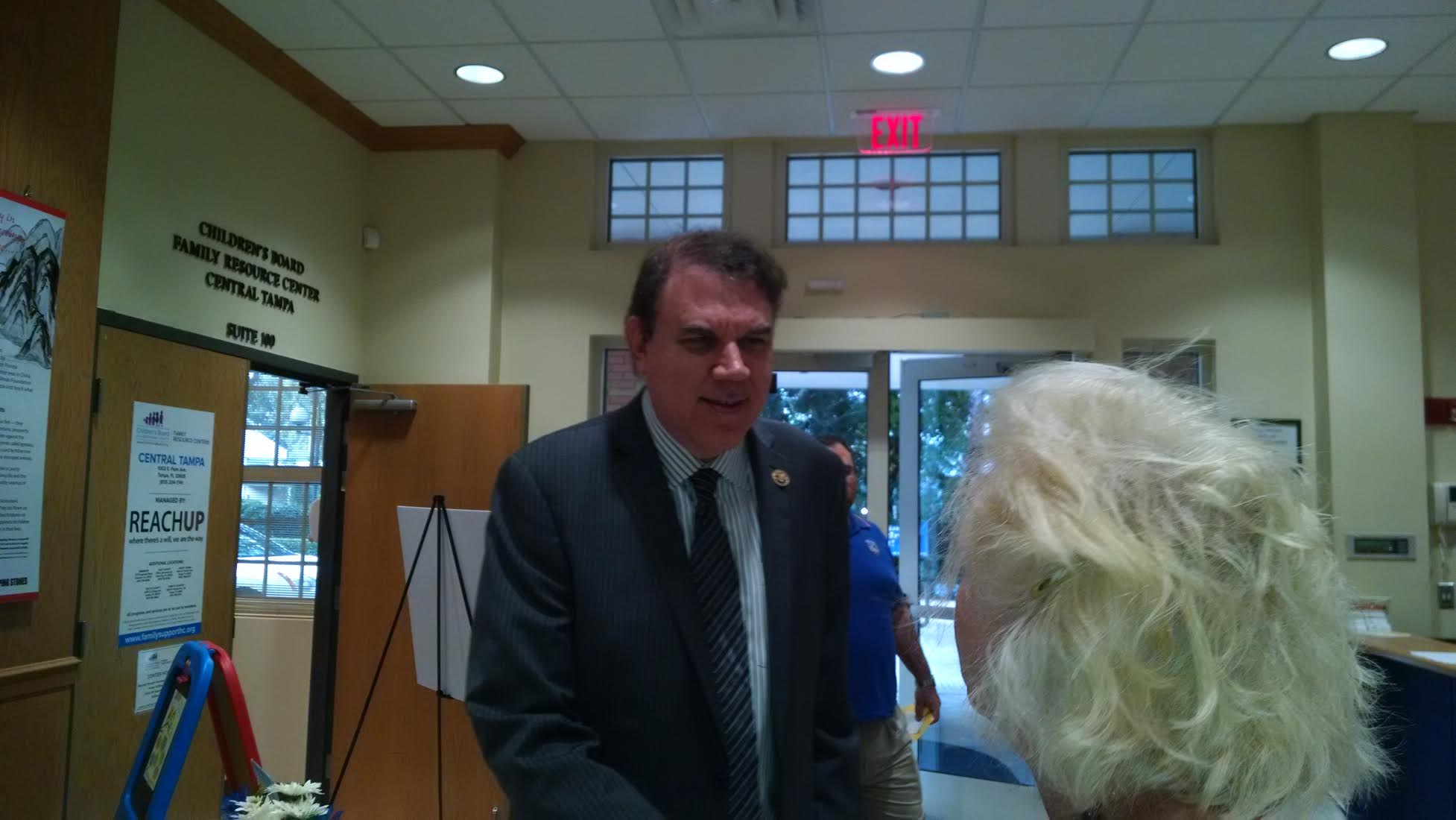 Speaking to about 70 members of the party’s executive committee members, the Orlando congressman and top Senate challenger to Murphy for the Democratic nomination for Senate spoke and took questions for about 45 minutes. The event was the Democrats’ monthly meeting at the Children’s Board in Ybor City.

“A lot of people think it’s a club, like the Rotary Club,” Grayson said about being a member of the Democratic Party. “I think of it like a gang, like the Crips and Bloods. We have to protect our turf. Our turf is the American middle class.”

He said it’s more like the American Dream that Democrats were put on earth to protect, animated around the idea that everybody should reach their full potential in life. He said obstacles to that include racism, bigotry, lack of education and/or a lack of access to health care.

“The entire Republican Party is in a contest to see who can be the biggest bigot,” he said, referring to recent comments made by Ben Carson and Donald Trump.

Grayson went on to tout his voting record, where he boasted that no member of Congress has passed more bills and/or amendments in the House than himself. “And if you don’t believe me, check with PoliFact,” he said, what has labeled his boast as “mostly true.”

He also said Democrats need to become the party of seniors once again. That requires more than just campaigning on what Republicans will do to hurt those social programs, he said, but to have an active affirmative program for seniors similar to those the party has for gays, women, people of color and other important constituencies.

“Think about next year. We have a former governor running for president who says that he wants to ‘phase out Medicare.’ We’ve got a local congressperson, David Jolly, who worked for a lobbying firm that lobbied to eliminate Social Security and Medicare. Why didn’t that come up? Did I miss something? Eliminate is too hard of a word. Reduce. Vouchers. Privatize. Jolly’s running for the same seat I’m running for. People think he might get the nomination.”

Grayson was referring to lobbyist Free Enterprise Nation and a story reported extensively before the Jolly-Alex Sink special congressional election in March of 2014. Perhaps the best summary of this back and forth was reported by William March, then with The Tampa Tribune).

That led to a segue into a bill he has introduced that would increase Social Security retirement benefits and tie future increases to a new cost-of-living index. He also mentioned his legislation that would expand Medicare’s coverage to include examinations, treatments, and medical devices for eyes, ears, and teeth, which currently are excluded.

“I think it’s fair to say I shook up the House of Representatives quite a bit. I want to take this show on the road across the hall, to the other side of the building to the U.S. Senate, and shake that place up even more. That’s why I’m running.”

When asked by Democrat Lydia Hudson what he could do for the African-American community, Grayson said, “I will defend affirmative action.”

Grayson gave a nuanced opinion: “If the sanctions don’t work after 50 years, they’re probably not going to work after 500 or 5,000, I get that. But I would have preferred to have seen some sort of pathway in which there were mutual concessions that were made. I’ve been to Cuba, it is a dictatorship, it is not a democracy.”

He said he’s voted against every effort made by congressional Republicans to reverse President Barack Obama‘s executive actions with the Caribbean nation. “In the ideal world, we would have seen the Cubans make more progress towards freeing their own people. That’s how I feel.”

He said he supported most of the comprehensive immigration bill passed in the Senate two years ago, a bill that has not been voted on by the House. He said, though, that its 14-year path to citizenship is too long.