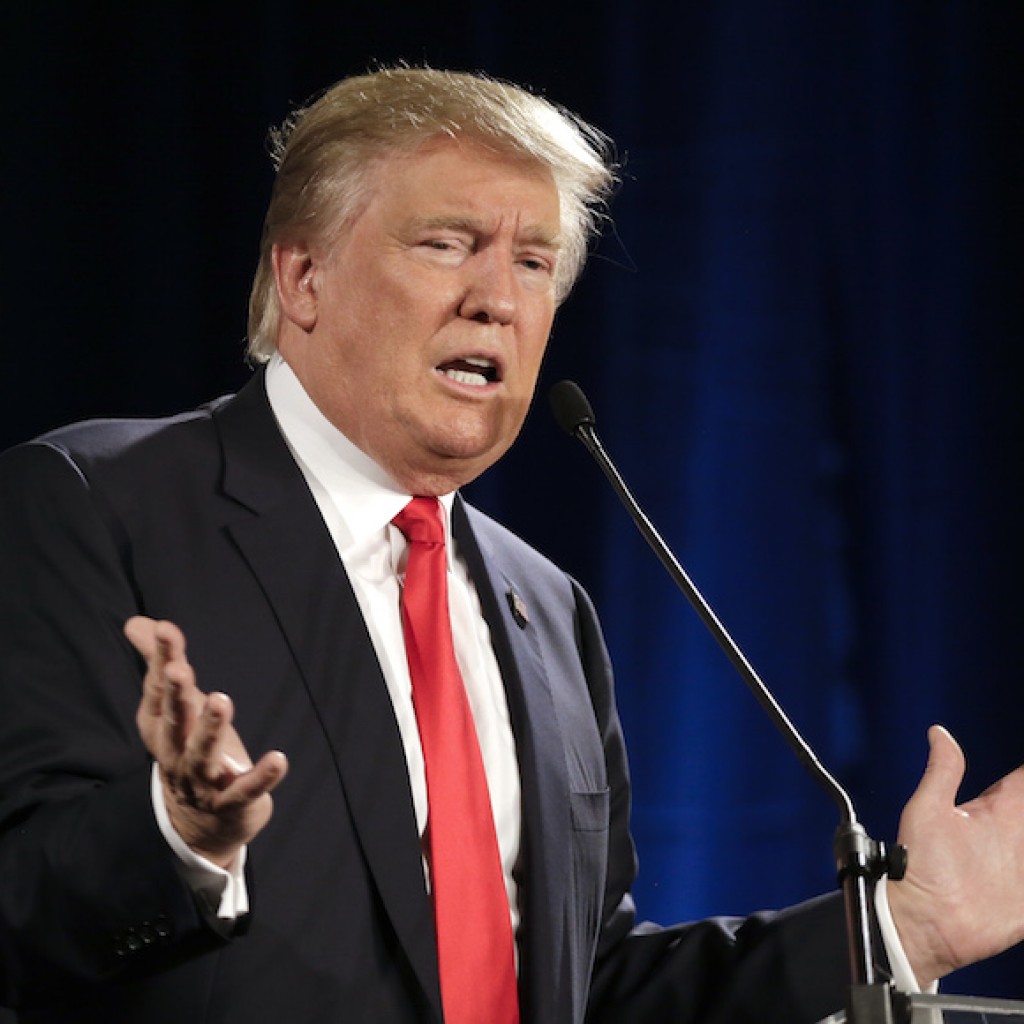 Trump said Monday night, “She was favored to win and she got schlonged, she lost,” using a slang word for male genitalia.

The GOP front-runner argued with that definition on Twitter Tuesday. “‘Schlonged’ is not vulgar,” he wrote. “When I said Hillary got ‘schlonged’ that meant beaten badly.”

He said the “dishonest” mainstream media was giving the word “false meaning.”

Trump, who has ramped up his criticism of Clinton in recent weeks, also mocked Clinton on Monday for returning late to Saturday’s debate following a commercial break because she’d been using the bathroom.

“What happened to her? I’m watching the debate, and she disappeared. Where did she go?!” Trump said at the rally at the DeltaPlex Arena in Grand Rapids, Michigan.

This isn’t the first time Trump has used what could be interpreted as gendered language to criticize Clinton. He has repeatedly described her as lacking the strength and stamina to be president and invoked the image of her putting on a pantsuit before heading to work.

But the latest remarks appear to have hit a new nerve. After declining to comment Monday evening, Clinton spokeswoman Jennifer Palmieri took to Twitter to label the language “degrading.”

“We are not responding to Trump, but everyone who understands the humiliation this degrading language inflicts on all women should,” Palmieri said on Twitter, concluding with the hashtag “imwithher.”

The latest rift between Clinton and Trump began during Saturday evening’s debate. Clinton claimed the Islamic State group had used videos of Trump’s comments about Muslims to recruit militants.

“They are going to people showing videos of Donald Trump insulting Islam and Muslims in order to recruit more radical jihadists,” she said.

There was no evidence to back the claim, and Trump quickly called Clinton a liar and demanded an apology.

“She’s a liar!” he repeated at the rally, labeling Clinton “not a president.”

Some of Trump’s critics have leveled similar criticism at him. Many Republican leaders fear Trump’s incendiary rhetoric would make him unelectable in a general election against Clinton, who is widely favored over two rivals for the Democratic nomination.

Clinton appeared Tuesday in Keota, Iowa, a small rural town where three high school students launched an energetic campaign to get Clinton to visit their school. Clinton entered the high school gymnasium — packed with about 700 people — alongside the students to huge cheers.

During her remarks, Clinton stressed the differences between Republicans and Democrats in the field. She decried Trump’s rhetoric on Muslims, saying it was “not only dangerous, it’s shameful.” She said that kind of talk plays in to the hands of violent jihadists.

“It’s a very serious matter when you hear some of the things he and unfortunately some of the others have been saying,” Clinton said.

Clinton did not reference Trump’s latest comments on her 2008 presidential bid, but she made a veiled reference to his campaign when a student asked her about combating bullying.

Advocating for more “love and kindness” Clinton added: “That’s why it’s important to stand up to bullies wherever we are and why we shouldn’t let anybody bully his way into the presidency. Because that is not who we are as Americans.”

Former Florida Gov. Jeb Bush, who has made Trump his main target in recent days, also weighed in Tuesday while campaigning in New Hampshire, saying that Trump’s behavior is not only offending people and turning voters off to him, but it is also hurting the Republican Party.

“There has to be a level of decorum to win. It’s not a sign of strength to insult people with profanity,” Bush told reporters after speaking to voters at a community college in New Hampshire’s north country. “Trump is not going to be president because he says these things. It turns people off. For crying out loud, we’re two days before Christmas.”

previousCatherine Durkin Robinson: The season comes to try to get along