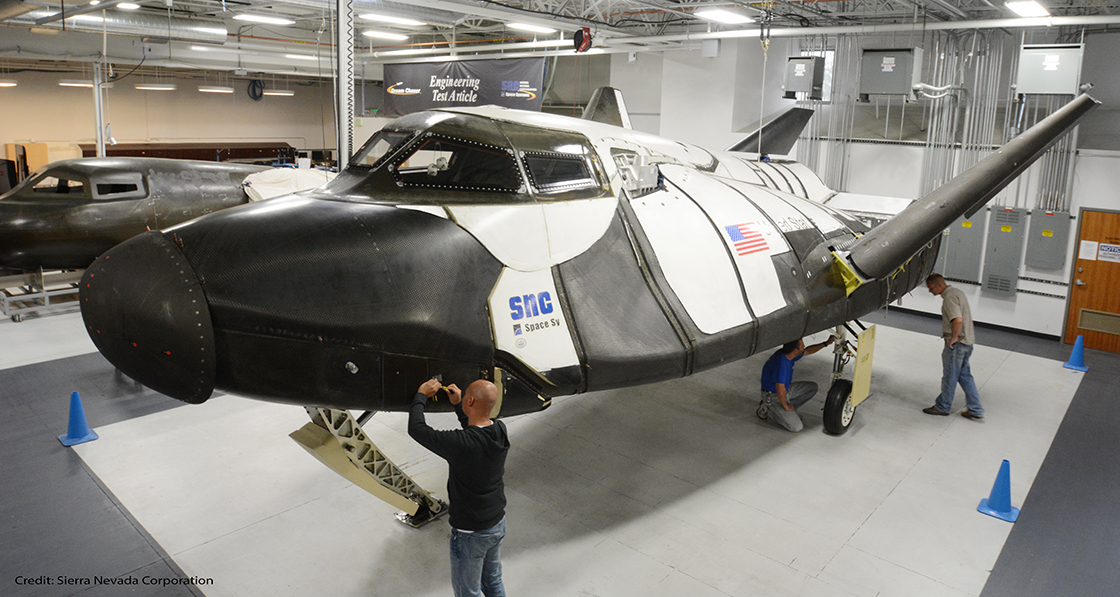 Sierra Nevada’s space plane “Dream Chaser” will be launching from Florida’s Cape Canaveral and landing on the old space shuttle runway as early as late this year and regularly by the end of the decade.

NASA announced Thursday that it had selected Sierra Nevada as a third private contractor to shuttle supplies and equipment to the International Space Station. Sierra Nevada gets a five-year contract and is expected to start launching in 2019.

The Nevada-based company joins SpaceX and Orbital ATK as contractors to run private space delivery services for NASA. Those two companies, which won the freight contracts in the first round, seven years ago, also won new contracts in this round. Each is assured at least six cargo missions.

Sierra Nevada’s NASA commercial cargo contract also means a boon for Florida’s space industry development corporation, Space Florida. Space Florida has a long-term lease on the shuttle landing facility at Kennedy Space Center, but until now has had no space customers, other than a deal for possible landings by an Air Force space shuttle.

“That’s awesome,” said Dale Ketcham, chief of strategic alliances for Space Florida. “We were kind of hoping they might spread it among the three of them. It’s great for Florida.

It also means NASA has an alternative spacecraft that can land horizontally, something it has lacked since the space shuttle program ended in 2011.

“I think that’s very much why they wanted it, even though it’s the least developed technology, so there is additional risk. I think a lot of people want horizontal return capability for payloads. Coming back in a capsule puts a lot of G forces and vibration,” Ketcham said. “If you have delicate stuff coming back the space station that needs a gentle ride home.”

There’s another good reason NASA may have wanted a third contractor. Both SpaceX and Orbital ATK were unavailable for much of 2015 because they had rockets blow up and had to shut down their programs for a while. During that time, NASA relied on Russian and Japanese rockets to carry cargo to the space station

SpaceX also launches from Cape Canaveral AFS (and plans to move to Kennedy for some future launches.) Orbital ATK’s long-term strategy is to launch from a complex on Wallops Island, Va. However, its last launch from there, in October 2014, blew up, and the company is reworking its rocket. In the meantime, it has switched to Cape Canaveral Air Force Station, for a launch it made with a ULA Atlas V in December and for a second Atlas V launch expected in March.

Sierra Nevada’s contract victory means the company has a clearer future. Without any government contracts, Sierra Nevada was planning to make a go just launching private payloads into space. But the NASA deal, which has flexibility in the number of launches and NASA payments, could be worth close to $1 billion. That gives the company the kind of development money that would significantly reduce its development costs and prices for private customers

“In such a major competition, we are truly humbled by the show of confidence in SNC and look forward to successfully demonstrating the extensive capabilities of the Dream Chaser spacecraft to the world,” Sierra Nevada President Eren Ozmen stated in a news release issued by the company. “SNC’s receipt of this award is an American Dream come true for all of us.”

The Dream Chaser, which is about a quarter the size of a space shuttle, is scheduled to get its maiden orbital test flight on Nov. 1, 2016.

The company also is planning to launch and land elsewhere. In fact, last year the company put out a request for proposals that was open both to spaceports — there are ten either operating or planned in the United States alone — and commercial airports that have long runways.

Development of commercial space has been a top priority in President Barack Obama‘s space policy. However, it is not shared by all, and some members of Congress on both sides of the aisle believe that NASA must develop its own new vehicles.

“Few would have imagined back in 2010 when President Barack Obama pledged that NASA would work ‘with a growing array of private companies competing to make getting to space easier and more affordable,’ that less than six years later we’d be able to say commercial carriers have transported 35,000 pounds of space cargo (and counting!) to the International Space Station — or that we’d be so firmly on track to return launches of American astronauts to the ISS from American soil on American commercial carriers. But that is exactly what is happening,” NASA Administrator Charles Bolden stated in a news release. “Today’s announcement is a big deal that will move the president’s vision further into the future.”