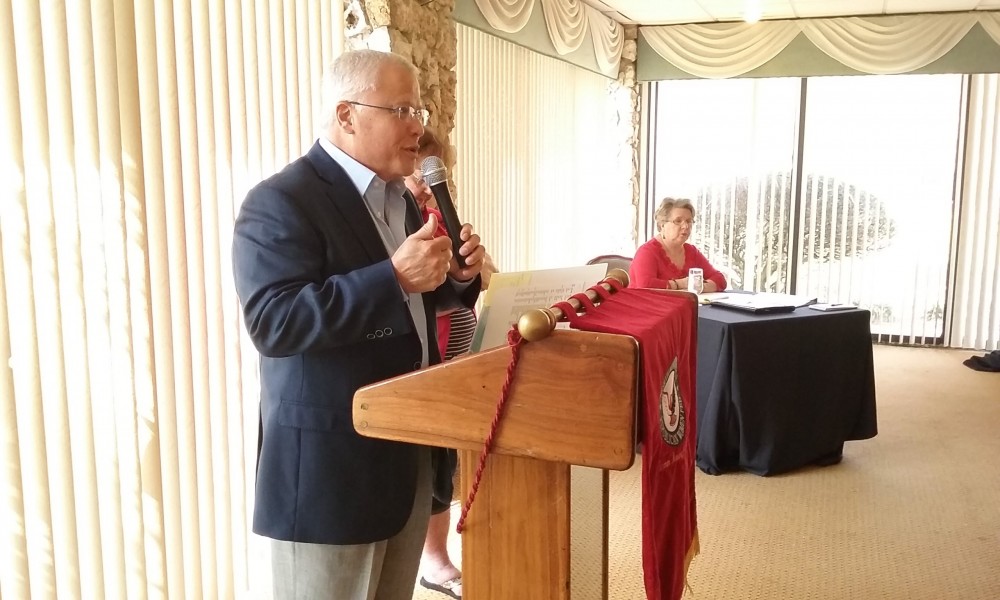 At a Thursday meeting of the NW Orange Republican Women Federated at the Errol Estate Golf & Country Club in Apopka, Senate hopeful Carlos Beruff outlined why he would be right for the job.

Given only three minutes before the group, Beruff used them to speak about his upbringing and business acumen. His family immigrated from Cuba to the U.S. in 1957, Beruff said, after a failed attack on the presidential palace in Havana.

“My mother was the only woman conspirator in that pack,” he said. “She ran an exile to Miami, where I was born in 1958. I got the lottery ticket to be an American citizen that day. My brother and sister were both born in Havana. Two years we went back to Cuba, thinking Fidel Castro was gonna be a great guy. That didn’t work out too well.”

From there, they returned to the U.S. in 1961, where they stayed ever since. Beruff announced his Senate run late February in Miami.

His personal history was what recently led him to criticize President Barack Obama‘s policy on negotiating with Cuba. If Obama visits Cuba, Beruff said earlier this week, he “should stay there.”

“We should negotiate better deals,” he added. “He didn’t negotiate a very good deal. Castro shouldn’t jail dissidents. And we got nothing for opening up Cuba for all our money, which is a lot.”

Beruff said his record of creating businesses and jobs as a homebuilder in Manatee County convinced him he could do the same on a larger scale in the Senate.

“I’ve created jobs, I’ve stimulated the economy, and I’ve built a business,” he said. “I can do that for the nation.”

Beruff pointed to his record of serving on the Southwest Florida Water Management District, the State College of Florida and the Manatee-Sarasota Airport Authority to why he’d be good in a leadership position.

He said one of the biggest challenges of being in the Senate would be trying to sway a large amount people over to his opinion, something he isn’t used to doing as a private business owner. The largest he’s ever had to sway is 13 people, he said.

But he’s also got a plan.

“I think when you make factual presentations to people, when the math is 2+2=4, and they ignore it,” he said. “Then they look stupid. I don’t think people like looking stupid. You can spin it all you want, but when the facts are clear and concise, you should be able to convince people to do the right thing.”

When asked about how concerned he was about preserving the environment, as someone who builds homes, Beruff said it wasn’t something he troubled himself with – there were enough laws in place to protect the environment as is.

“It benefits us to preserve the environment because we make more money off it,” he said. “The environment attracts many people to Florida.”

On Sen. Marco Rubio, who recently dropped out of the race for president, Beruff said he thought it would have been wiser for Rubio to wait longer before running for president.

“Senator Rubio is a very talented young man,” Beruff said. “But I really believe he should stay the course of whatever he elected to do until it’s complete. I think too often people don’t finish the job they start and nothing gets done in this country, at the federal, state or local level. Whatever you signed up for, finish it, and then go on and do something else when you’re finished with that.”