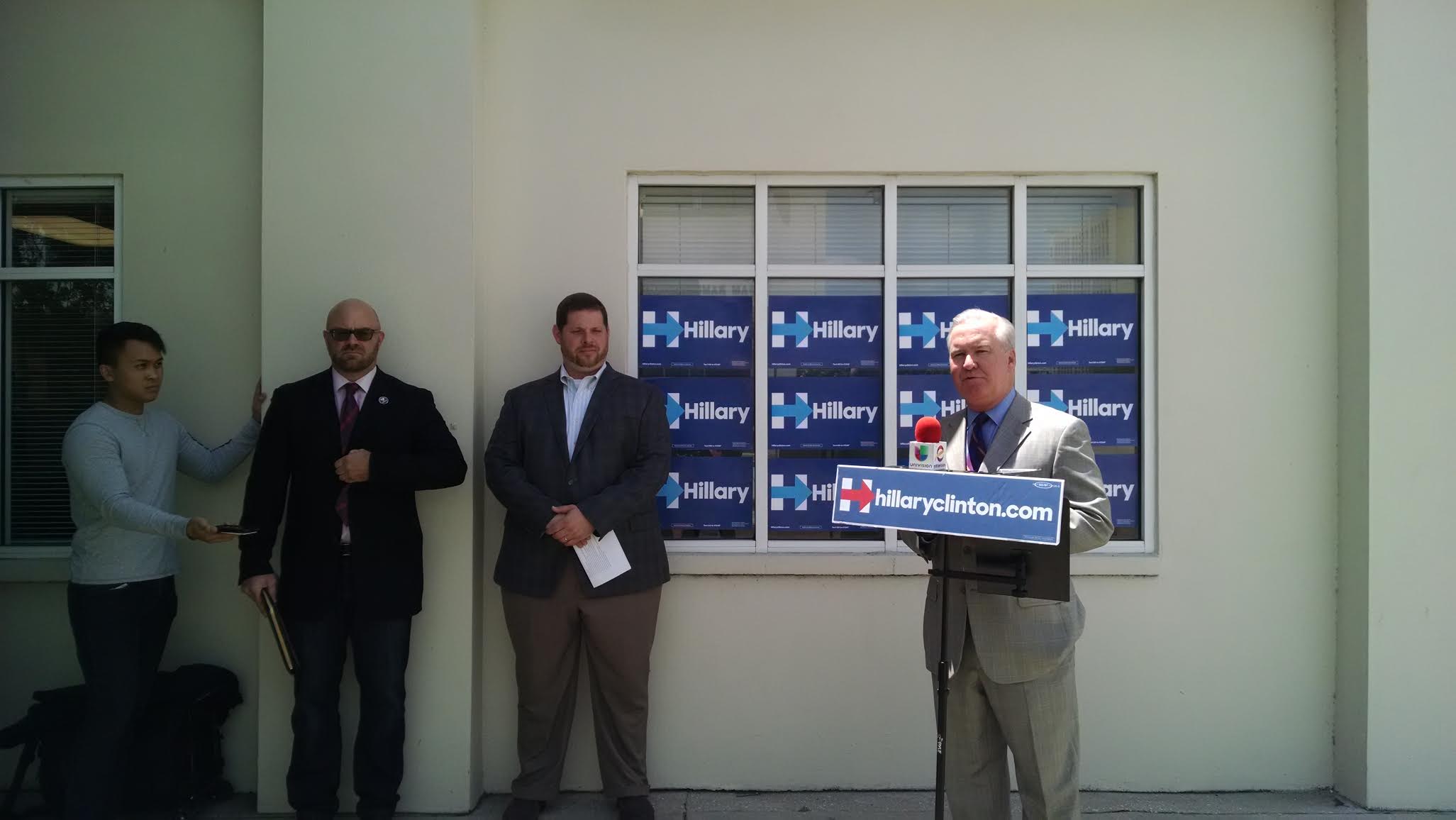 Whatever one wants to say about Hillary Clinton, her campaign appears to be extremely disciplined in the Sunshine State.

As the presumptive Democratic presidential nominee was bashing Donald Trump’s economic record in a speech in Columbus, Ohio on Tuesday, the campaign sent out its top Tampa Bay area surrogate, Tampa Mayor Bob Buckhorn, to join with a small-business man to denounce Trump’s plans — or lack thereof — for the economy.

“Twitter is not an economic policy,” Buckhorn said in his beginning remarks. “I think what we’ve seen from Mr. Trump over the last year is somebody who talks a lot, degrades Americans, regardless of their standing, but has no coherent policy for moving this country forward.”

Back in 2005, Trump and a group of local developers announced that they intended to construct a $300 million 52-story condo tower on the Hillsborough River in downtown Tampa. Buckhorn said there are still investors suing Trump for the failure of the Tampa Trump Tower, “not dissimilar to the other 3,500 lawsuits that have been filed against Donald Trump over the last 30 years, by small business people who were stiffed, who were asked to take thirty cents on the dollar, rather than the value of what they did, small contractors who were driven into bankruptcy.”

Bob Gibson, Vice President of the Service Employees International Union 1119, said Trump has filed for bankruptcy four times, and mentioned several of his businesses that ultimately went belly up, such as Trump Airlines, Trump Steaks, Trump Water and Trump University.

“All of these failed businesses have cheated investors, contractors customers and employees, working people that played by the rules and tried to get ahead, but are still stuck holding the bag,” Gibson said.

The news conference was held in front of the offices of Allegra Printing, a marketing and communications provider. Co-owner Jeffrey Routman criticized Trump for failing to come up with many specifics on how he’d address the economy.

“It’s ludicrous to think that a person running for the presidency of the United States has come this far and has not laid out a plan yet,” Routman said. “As a small-business owner, we rely on our planning. We plan, we revisit the plan, we adapt, and we change from there, and with nothing in place then how are you supposed to go forward from there?”

In Ohio, Clinton bashed some of Trump’s previous comments on the economy.

“Donald Trump actually stood on a debate stage in November and said that wages are too high in this country,” Clinton said. “He should tell that to the mothers and fathers working two jobs to raise their kids. He said — and I quote — ‘Having a low minimum wage is not a bad thing for this country’ — at a time when millions working full-time are still living in poverty.

“Back in 2006, before the financial crash, Trump said, and again, I quote, ‘I sort of hope’ that the housing market crashes, because he’d make money off all of the foreclosures.”

The former first lady also quoted a report produced by economist Mark Zandi saying a Trump presidency could lead to the loss of some 3.5 million lost jobs.

Trump issued a statement immediately afterward trashing Zandi, citing articles that report that Zandi is a Democrat who has given money to Clinton (though he also worked on John McCain‘s 2008 campaign against Obama).

Trump later issued out another statement, where he claimed that Clinton “fueled the mortgage meltdown,” and said that her “bad judgment continues with her plan to put coal miners ‘out of business,’ raise taxes by over a trillion dollars, and expand regulation by executive order — destroying millions more jobs.”

Clinton said that she would set forth her positive vision for the economy on Wednesday in North Carolina.

Earlier today, Quinnipiac reported the poll results in three big battleground states. While Clinton’s lead has increased in Florida to 47-39 percent, the two major candidates are tied in Ohio and in a statistical tie in Pennsylvania (Clinton leads by a single percentage point there).

Buckhorn was asked if that indicated that Clinton isn’t doing as well as she should be, considering the overwhelmingly bad press Trump has generated for himself in the past two weeks?

“Obviously, we all know that the battleground states in the Midwest are going to be competitive, ” the mayor responded. “Working class whites in particular for some may find some appeal in what Mr. Trump says. But I think the more they think about it, and the more he’s exposed as a candidate without a track record, without a platform,  with no programs that will benefit them, with a tax plan that’s only going to help the wealthiest one percent, I think you’re going to see a lot of those folks come home to the Democratic side and come home to Secretary Clinton.”