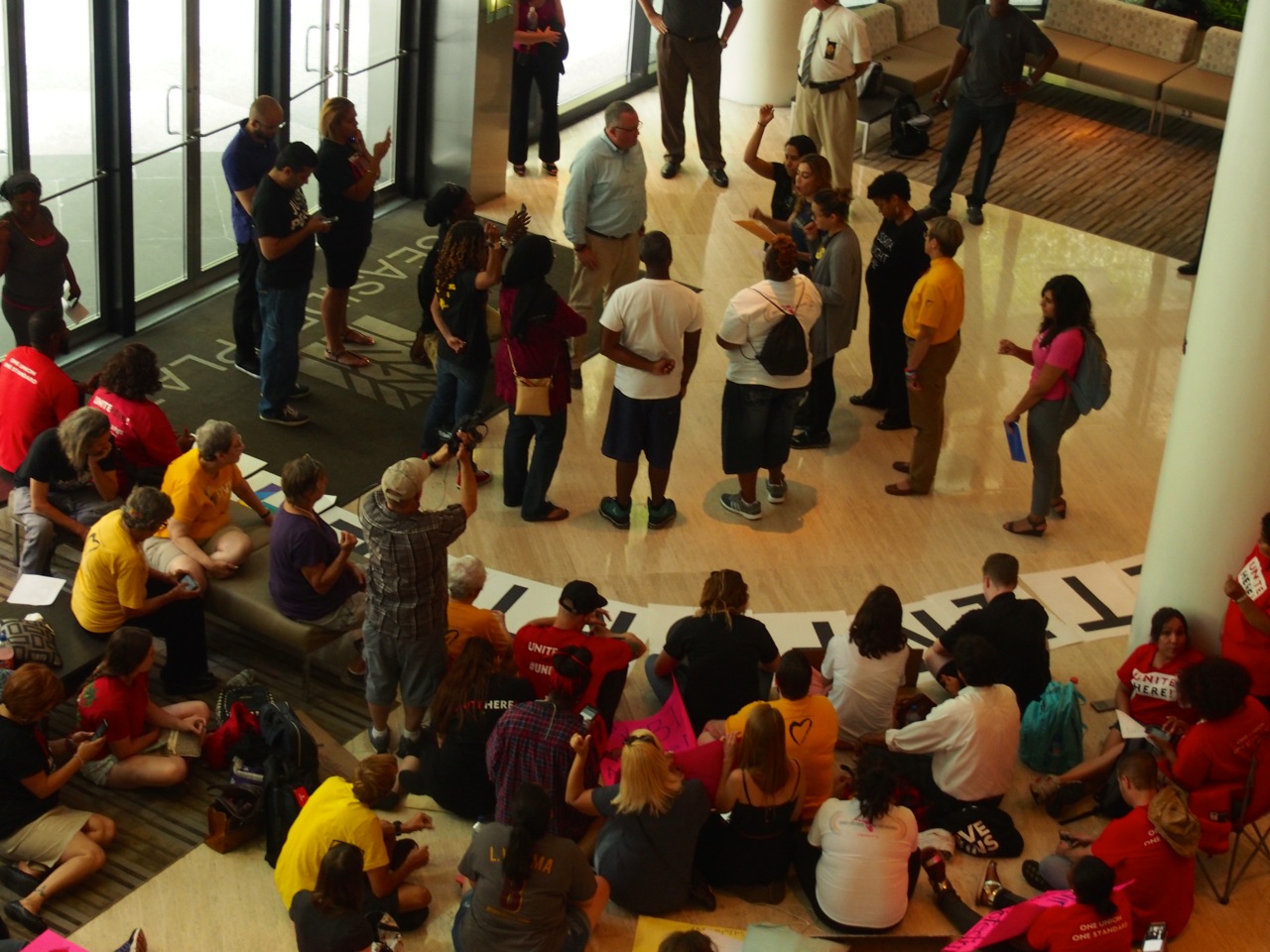 Ten protesters were arrested for trespassing Monday evening after the building’s management announced it wanted to lock down the building for the night and clear everyone out and those protesters refused to go.

All 10 were released early Monday morning after posting bail for misdemeanor charges.

There was no violence. When ordered to go, most of the protesters left the lobby of the Seaside Office Plaza peacefully while ten chose to remain. Orlando police then arrested them without incident. They are, Geoffrey Paquette, Frederick Velez III, Charlotte “Cha-Cha” Davis, Ida Vishkaee Escamani, Maria Bolton, Jill Giese, Joan Irwin, Angelica Sugahwatahh Brown, David Thomas Moran and Apostle Robin Harris.

Afterwards, one of the organizers,  Anna Vishkaee Eskamani, sister of Ida, expressed thanks to the Orlando Police Department and Mayor Buddy Dyer “for handling the situation so respectfully and professionally,”

She also said this would not be the end, though it technically was the end of the 49-hour sit-in protest, roughly 39 hours early. However, the protest was run by a coalition of groups, and each group might make a different decision, she said.

“Our team isn’t planning anything,” at the building housing U.S. Sen. Marco Rubio’s Orlando office,” she said. “I can’t speak to what anyone else is motivated to do.

“We are coming back together,” she said of the coalition. “WE know this is only the beginning. We know it isn’t over yet.”

More than 100 protesters are staging a 49-hour sit-in downstairs from U.S. Sen. Marco Rubio‘s Orlando office seeking to condemn his positions on gun control and gay rights and portray him as someone who has not responded politically to the Pulse nightclub massacre.

The protesters, representing a coalition of mostly progressive organizations and individuals loosely known as Orlando Solidarity, vowed Monday to stay two days and one hour, marking an hour for each of the 49 people killed in the June 12 mass shooting at Orlando’s popular gay nightclub, Pulse.

They occupied about half the first-floor lobby of the Seaside Office Plaza in downtown Orlando because they oppose Rubio’s post-Pulse votes on gun control bills and his longtime opposition to some LGBT issues, including gay marriage, and in protest of law enforcement shootings of black men.

They accuse Rubio of doing nothing substantively to respond to the mass shooting that traumatized Orlando. In addition to 49 people killed, 53 were wounded. They declared demands for three planks:  a comprehensive platform to address gun safety, equality for LGBT people and people of color, and action to address community violence, which includes “senseless and systematic murder of unarmed black and brown people at the hands of law enforcement.”

Rubio’s deputy chief of staff and state director Todd Reid briefly addressed the group shortly after noon Monday, assuring them they were welcome and would be welcome to come upstairs to talk about their concerns at anytime. Reid also pointed out Rubio and his staff had played strong, supportive roles in Orlando after the massacre and would continue to support all people affected by the tragedy. He also argued Rubio had supported two of the four gun measures the U.S. Senate took up the week after Pulse, those offered by the Republican leadership.

But he wasn’t there to promise any policy changes, and didn’t expect any to come forth that would meet the protesters’  demands, and frankly most of the protest’s leaders probably don’t expect any either.

One of the organizers, activist Anna Vishkaee Eskamani, called Reid’s response “no surprises.”

“Rubio is one of many elected officials who one month after Pulse we’ve seen absolutely nothing from. And doing nothing isn’t a decision you can make,” she said. “Tomorrow is the one-month anniversary at Pulse and we’re here sitting in for the 49.”

A Rubio spokesperson in Washington issued a statement that read:

“Sen. Rubio respects the views of others on these difficult issues, and he welcomes the continued input he is receiving from people across the political spectrum. Sen. Rubio and our office continue working around the clock on federal casework to assist victims’ families, survivors and their families, and we stand ready to continue assisting, including lending staff to the victim assistance center as we did for the last few weeks. Over the past month, Sen. Rubio has supported commonsense compromises to make it easier to track individuals who have been on the terror watch list and later try to buy firearms, all while improving due process protections for law-abiding Americans. “

Meanwhile, Orlando police and the building’s management, Highwoods Properties, were watching yet keeping a safe distance from the fray, not commenting, after advising the protesters early that they should make sure to not disrupt any of the business of the tenants of the building. The protesters mostly contained their positions to a side portion of the lobby and dug in.

Food and water deliveries appeared, including pizza compliments of the congressional campaign of Susannah Randolph, an Orlando Democrat running for Florida’s 9th Congressional District, who has a long history of her own involvement in such protests.

previousHillsborough County PTC is raising fines on ridesharing drivers, and Jeff Brandes doesn't like it

nextLake O discharges or septic systems: Newspapers disagree over what's to blame for the blue-green algae